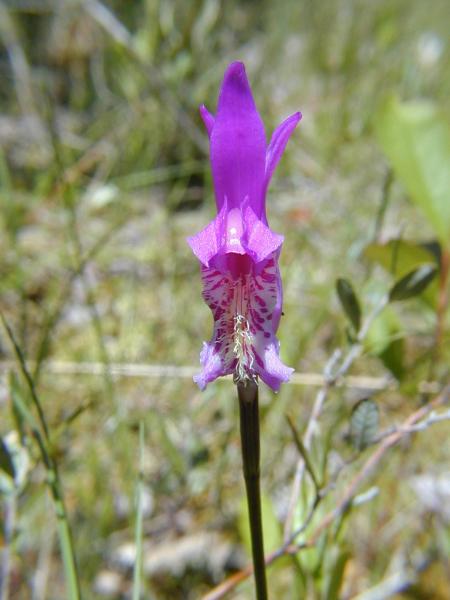 Dragon's-mouth orchid is considered rare throughout much of its range. This orchid is listed as rare in 17 of the 21 states and 6 of the 9 provinces where it is found. A number of populations are known from the northern Great Lakes. This orchid is difficult to see when it is not in bloom.

This pink orchid, once found throughout much of the state, is currently limited to some higher quality fen and bog communities. The total number of known populations is estimated at 20. There are a number of historical populations which have not been inventoried, but most of these are believed to be extirpated. Historically, there were a number of scattered populations on Long Island, but the last time this plant was reported from Long Island was in the mid-1980s. There are probably a few scattered stems still present there, but its long-term prognosis on Long Island is grim.

While the Long Island populations have always been small, no plants have been reported on Long Island since the mid-1980s. These populations are feared lost. Populations in the Adirondacks, central New York, and St. Lawrence Valley have been relatively stable as long as succession does not shade out the orchid.

The orchid was once known from scattered locations on Long Island, in the Hudson Valley, and in the Mohawk Valley. Today, we do not know of any populations within these regions of the state. Fortunately, the populations in the Adirondacks and central New York have not declined.

Invasive plants and succession of the habitat to shrubs are a continuing threat to most of the populations present around the state. Populations on Long Island are threatened by development and natural changes in habitat. These Long Island populations are usually small with only a few plants each. As a result, even minor threats or changes to the habitat can extirpate these populations. Some upstate populations are threatened by surrounding development, but most of them are in isolated wetlands. Any hydrologic changes that impact the wetlands where this orchid is found would certainly threaten the long-term stability of the orchids in and near the impacted site.

Since development activities directly result in habitat loss and indirectly may cause an increase in invasive species, sufficient buffers are needed around sites where this orchid is known to occur. These buffers should be a minimum of 100 meters. The buffers should be greater than 100 meters in cases where drainage patterns, slope, and/or soil type may result in runoff into the wetland supporting this orchid. In areas where the orchid is known, some active management to reduce the overall shrub cover may be needed to maintain an open canopy. As a precaution to limit illegal collecting and the spread of invasive species, human visitation to sites where this orchid is found should be monitored.

Habitat studies are needed on Long Island to determine the habitat requirements there. The Long Island populations are in vastly different habitat than typical habitat observed elsewhere in New York. In order to provide more detailed management requirements, a competition study is needed to determine the population dynamics of this orchid as a site succeeds from an open wetland to a shrub-dominated wetland. Habitat modeling may be helpful in locating new populations.

This is an orchid of sphagnum hummocks within rich graminoid fens and medium fens. Smaller populations are also located in wet depressions of maritime shrub thickets on the morainal bluffs near the Atlantic Ocean (New York Natural Heritage Program 1998). Sphagnum bogs and swampy meadows (Gleason and Cronquist 1991). Sphagnous bogs and peaty meadows (Fernald 1970).

This orchid has a scattered distribution including areas within the eastern shore of Lake Ontario, the upper Hudson River, southern and eastern Adirondacks, Hudson Valley, and eastern Long Island.

Dragon's mouth orchid (Arethusa bulbosa) occurs from Newfoundland west to Minnesota and Saskatchewan, and south to Maryland, northern Indiana, and in the Appalachian Mountains to North and South Carolina. The species is disjunct in Louisiana. The distribution of Dragon's Mouth orchid is patchy throughout much of this range, especially in the south.

Dragon's Mouth orchid has one, sometimes two, magenta to bluish to white flowers at the top of a single narrow stem about 6-40 centimeters tall. The lip of the flower is pinkish-white with purple splotches and a yellow midvein. It curves out then down and has fringe on the top. Three petals form a hood over the lip while the two remaining petals stick up like rabbit ears. There is one long, narrow leaf halfway up the stem that is absent when the plant is in flower.

Once a person has seen this lovely orchid in the field, it is difficult to forget its striking features. Growing from a bulb, each plant usually only produces a single stem. This plant is essentially leafless at flowering, with one leaf arising from the upper of 1-3 bracts after flowering. The flower lip ascends at the base then curves forward and down at the widened summit. This lip is bearded, pinkish-white in color, and usually spotted and streaked with purple and yellow. The sepals and lateral petals are erect or arched-ascending over the column. The erect capsule is 2.5-4 cm long, long beaked, and often capped by a withering, but persistent, perianth.

While experts can identify this plant in fruit or even from the dried persisting fruit stalks, for easy identification it is best to search for it in flower. When flowering, this plant can be seen from a great distance if not hidden by over-topping vegetation.

Rose pogonia (Pogonia ophioglossoides) has well developed leaves at flowering while Arethusa is essentially leafless at the time of flowering.

The peak blooming time is Memorial Day weekend for Long Island and early to mid-June for northern New York. Flowers may be observed until late June or early July. The fruiting capsules could persist for more than a year, but most are broken down by compaction from snowfall. Surveys should be conducted during the peak blooming periods.

The time of year you would expect to find Dragon's Mouth Orchid flowering and fruiting in New York. 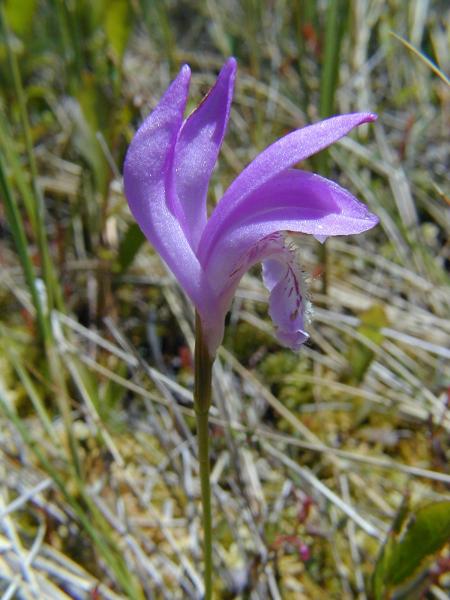 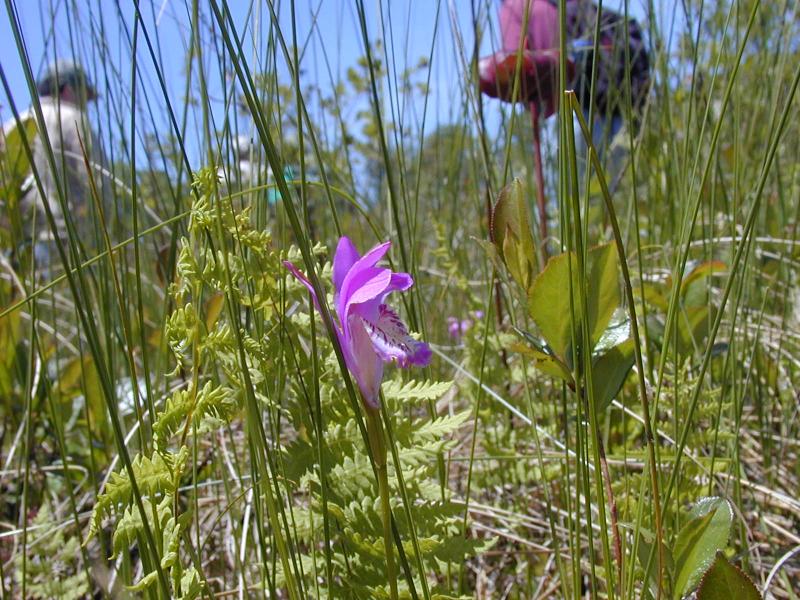 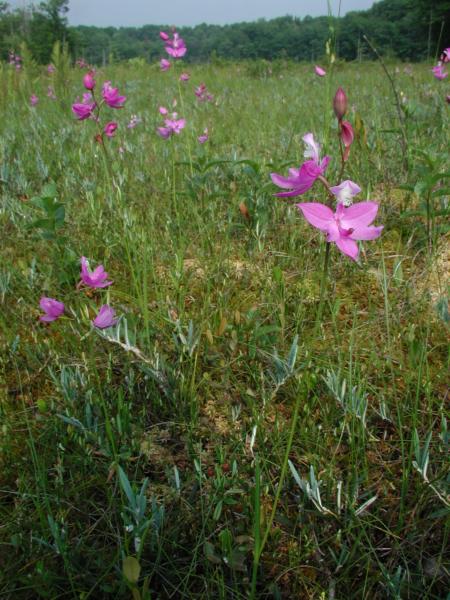 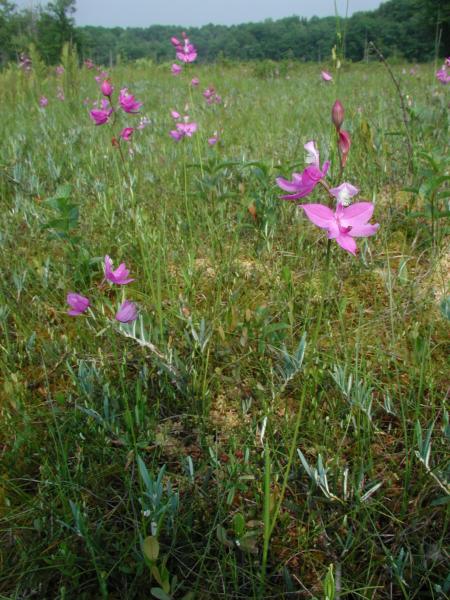 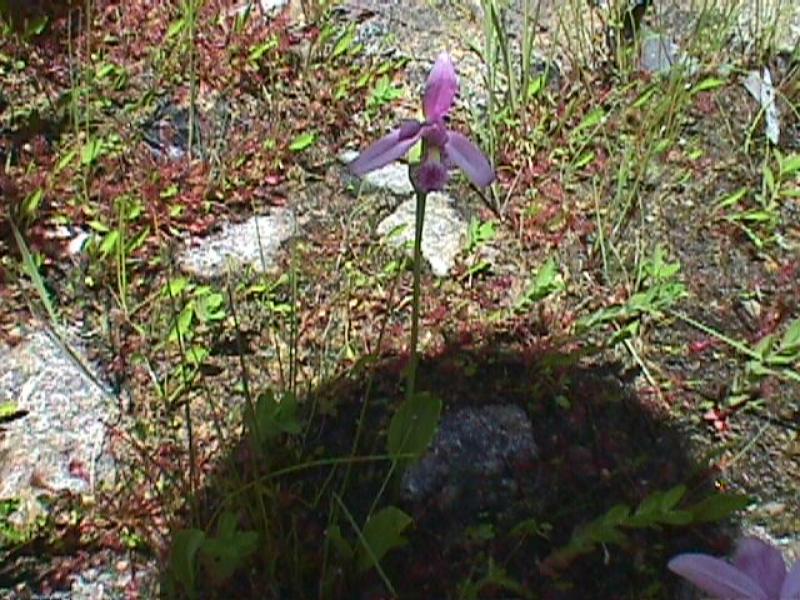 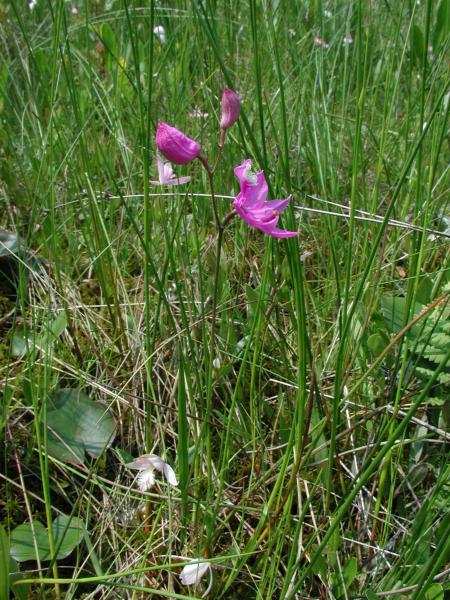 Thien, L. B. and B. G. Marcks. 1972. The floral biology of Arethusa bulbosa, Calopogon pulchellus and Pogonia ophioglossoides (Orchidaceae). Canadian Journal of Botany 50:2319-2325.