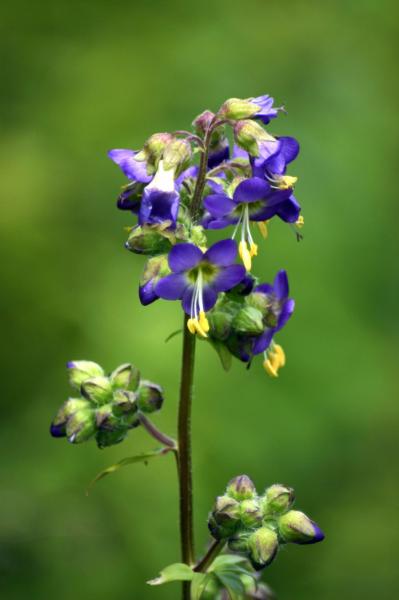 Jacob's-ladder was described as a new species in 1870 by N. L. Britton of the New York Botanical Garden and named after Mrs. Cornelius Van Brunt who made excellent collections from the Catskill Mountains of New York. New York has the greatest number of populations and some of the largest populations of Jacob's-ladder in the world.

There are 31 known sites and over 20 historical populations. A review of the known sites may show a high level of interaction and gene flow between the sites, whereby multiple "sites" may represent a single population. As a rough guess, New York likely has 10-15 populations represented by 31 sub-populations. Many of these sites are in isolated wetlands and/or within protected landscapes. While rare, this plant is well-protected within New York.

Most of our plants are in large, fairly isolated wetlands that have not undergone very much change in recent years. In a resurvey of 28 of the populations in 2003 there were seven sites with increased numbers, eight sites where numbers had decreased, 12 sites where the numbers were about the same, and one site with no previous numbers. Six sites may have been extirpated. This fluctuation in numbers is to be expected because of the dependence of this plant on water levels. Overall, populations seem stable but this trend will become clearer with more surveys over multiple years.

The number of plants and the number of sites where this plant occurs seems stable over time. Twelve historical sites have been searched and no plants have been found but many new sites have been found since 1985 (mainly due to increased survey efforts). This plant occurs in large wetlands that are fairly isolated and should be protected over time but it has also been recorded from small wetlands, especially along roadsides, where its long term survival is less secure.

Succession of open wetland habitats sometimes occurs but the threat is not widespread and does not occur rapidly.

With further research into this plant's response to beaver activity, better management of beaver activities in relation to the plant's habitat could be undertaken.

Research could be done into how this plant responds to beaver activity. We would like to know what kind of beaver activity is necessary and on what time frame for optimum Polemonium success (i.e., reproductive success, large population size, individuals of good vigor). We would also like to know how this plant responds to changes in habitat by seed banking.

This showy plant is found in wet meadows, swamps, seepage areas, beaver meadows, edges of streams, and sometimes ditches. It may be found under closed canopy, but seems to only flower regularly in open areas. Many of the sites are associated with a beaver impoundment, a high elevation and often high gradient seepage slope, or a narrow, meandering stream (New York Natural Heritage Program 2005). Rare in sphagnous glades, swamps, or marshes (Rhoads and Block 2000). Swamps and stream-banks (Gleason and Cronquist 1991). Wooded swamps, bottoms, sphagnous bogs, and mossy glades (Fernald 1970).

This showy plant is found in and adjacent to areas within the Catskill Mountains, Tug Hill Plateau, and central New York's Allegheny Plateau.

This plant extends from Quebec south through Maine, Vermont, New York, Pennsylvania, West Virginia, and Maryland. It is considered extirpated from New Jersey (only one population ever known) and New Brunswick. The majority of populations are located within the Catskill Mountains, Tug Hill Plateau, and Allegany Plateau of New York State.

Jacob's-ladder is a tall erect plant that is easily seen when in flower. It grows up to 3 feet tall and has alternate leaves that sport a ladder-like arrangement of 7-10 pairs of lance-shaped leaflets and one terminal leaflet. The numerous nodding flowers at the top of the plant are quite striking with five, deep blue-purple petals that have yellow centers and long, bright yellow and white stamens that hang down.

This showy wetland plant may grow to a meter or more in height and spreads by horizontal rhizomes. This often results in plants being locally abundant. The long leaves usually have 15-21 leaflets, these are typically 1-3 cm apart. The blue-purple flowers are about 1.5 cm long, and have stamens and a style that are much exserted from the corolla.

This plant is easiest to identify in flower. To verify the identification, collect a specimen, but only if the population size is large enough (use your best judgement, but as a general rule collections should only be made if there are more than 100 stems present). For small populations, multiple photos of the flowers and leaves should allow someone to verify the identification.

This showy plant flowers mid-June to late-July, with fruiting and vegetative plants persisting until the first frost. When under heavy canopy, the plants often do not flower. Surveys are most successful when conducted during the peak flowering period. Those familar with the plant may be able to identify it vegetatively, but it is much more difficult to locate vegetative plants.

The time of year you would expect to find Jacob's Ladder vegetative, flowering, and fruiting in New York. 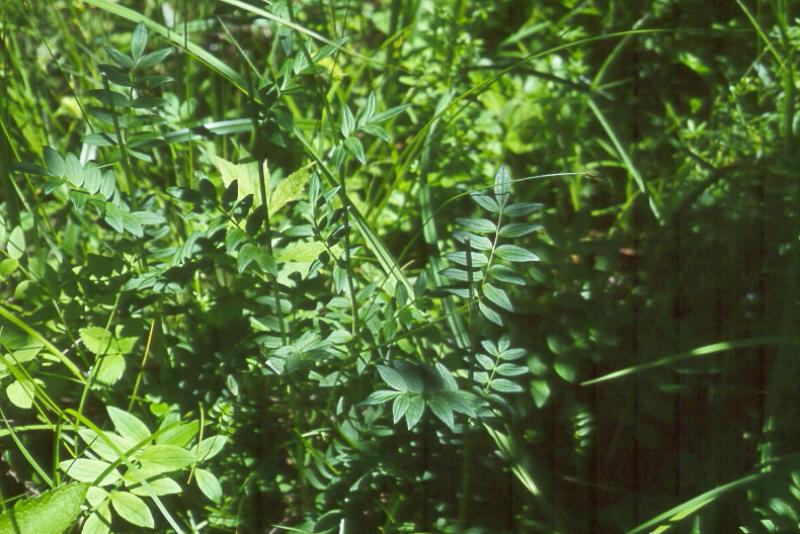 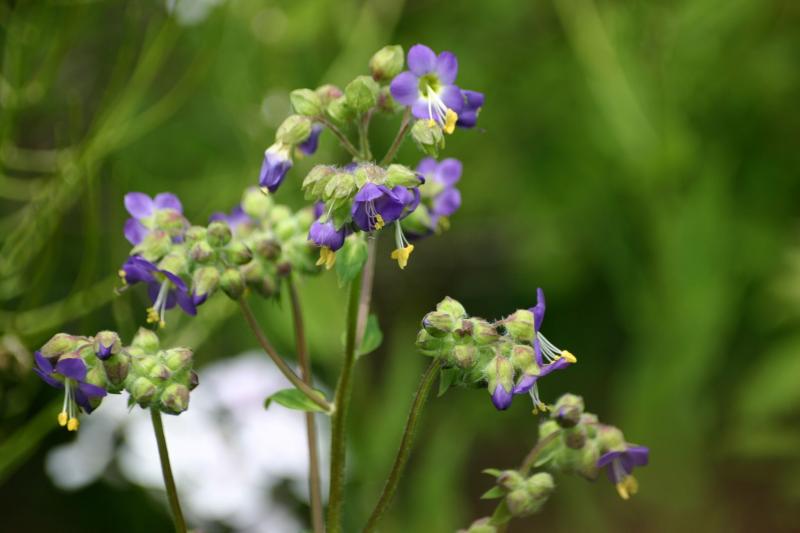 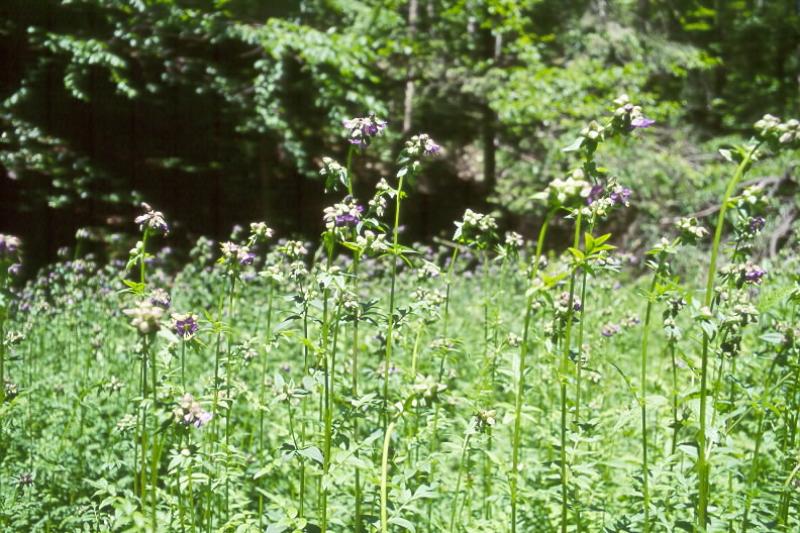 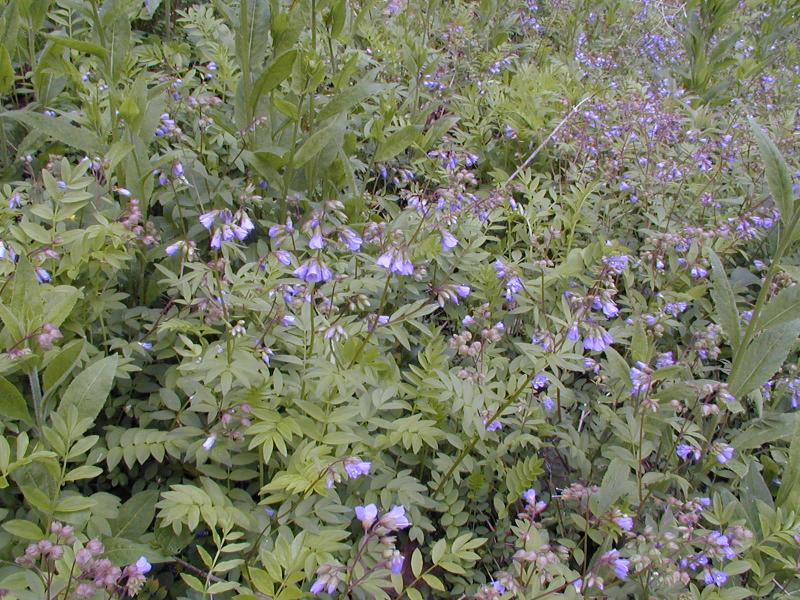