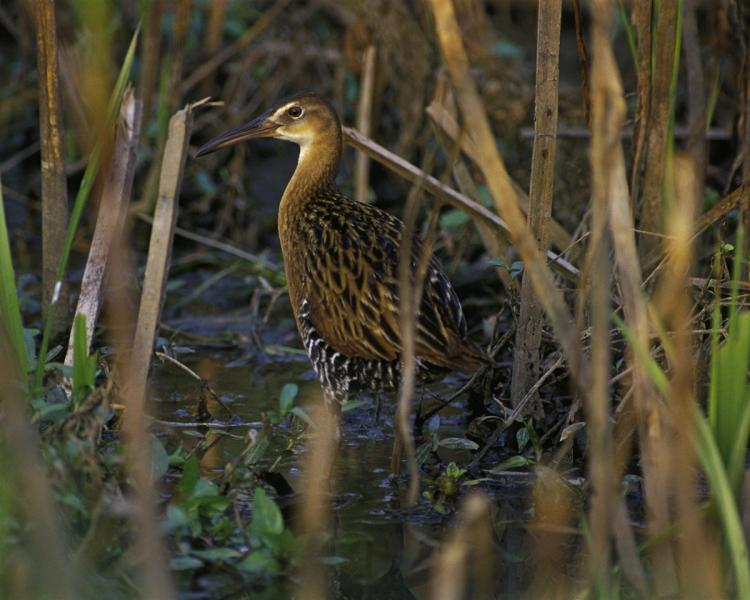 State Conservation Status Rank
S1B
Critically Imperiled in New York - Especially vulnerable to disappearing from New York due to extreme rarity or other factors; typically 5 or fewer populations or locations in New York, very few individuals, very restricted range, very few remaining acres (or miles of stream), and/or very steep declines. (A migratory animal which occurs in New York only during the breeding season.)
Global Conservation Status Rank
G4
Apparently Secure globally - Uncommon in the world but not rare; usually widespread, but may be rare in some parts of its range; possibly some cause for long-term concern due to declines or other factors.

John James Audubon first called the King Rail the Freshwater Marsh Hen because of its preference for freshwater marshes (Meanly 1969).

A rapid decline of King Rail populations has been noted in the northern portion of their range including in New York State where the species is considered a rare breeder. Habitat loss and degradation are the main reasons for the decline. Currently there are 19 known breeding locations, mostly in the western and central portions of the state, with two records from southern Westchester County (New York State Natural Heritage Program 2017). There have also been several winter sightings in the central and western portions of the state. King Rails were observed nesting on Long Island in the early to middle 1900s but have not been observed nesting there during recent surveys, although several recent sightings have occurred during the winter (Hamilton 1925a, b, Kuerzi 1926, Gochfeld 1975, Levine 1998, New York State Breeding Bird Atlas 1985 and 2005).

Over the past 30 years, the King Rail has been rapidly declining in the northern part of its range, particularly in New York where it is at the northern limit of its range (Levine 1998, Sauer et al. 2007). Very few breeding records are reported annually. A comparison of data from the first New York Breeding Bird Atlas of 1980-1985 with the second atlas of 2000-2005 shows a slight increase in the number of atlas blocks (two to four respectively) reporting probable breeding King Rails, which could be explained by more intensive searches for this species. It is generally overlooked in surveys because of its secretive nature.

During the early half of the 1900s, King Rails were fairly common, especially in the Midwest (Eddleman et al 1988, Meanly 1992). Now they are considered rare in several states and restricted to pockets of emergent marshes throughout their range. Wetland habitat loss is the likely cause for this decline.

Wetland habitat loss, degradation, and drainage as a result of agricultural practices and development are the most critical threats for the King Rail, followed by accidental take in furbearer traps, predation, and striking manmade objects during migration. The King Rail is a game bird but is rarely hunted and the effects of hunting on populations is largely unknown. In states where it is severely threatened, including New York, the season is closed (Meanly 1969, 1992, Eddleman et al. 1988).

Manage waterfowl areas that have known king rail nesting sites in ways that are compatible with rail species by maximizing cover for nesting. Avoid altering natural features that could be potential nesting habitat. Remove invasive species such as purple loosestrife if it is severely degrading the habitat. Wetland draining in the northern range, if necessary, should occur before nest establishment. Different areas of wetlands where King Rails are known to nest should be flooded or drained in different years to maintain optimal habitat (Eddleman et al. 1988).

Additional research is needed on population dynamics and the effects of land management practices on King Rails, specifically in relation to waterfowl management. More refined census techniques with careful documentation of breeding is a high priority. Determination of winter status and distribution is also needed (Eddleman et al. 1988).

During the breeding season, the King Rail inhabits fresh and brackish marshes in the southwestern and southeastern portions of the state that are fairly shallow (0-25 cm of water) and have well developed areas of emergent vegetation. During the winter months, King Rails can be spotted in the coastal salt marshes in the lower Hudson Valley and around Long Island (Eddleman et al. 1988, Levine 1998).

New York is the northern limit of the King Rail's range. Now and historically, King Rails are considered to be a very uncommon breeder in the state. Scattered breeding has been reported from extensive marshes in western New York, the Hudson River Valley, and Long Island. During the winter, King Rails have been reported from several localities on Long Island. Most of the reports have been from the coastal areas where specimens have been taken from muskrat traps set in salt marshes. There have also been few reports of wintering King Rails from central and western New York (Hamilton 1925a,b, Kuerzi 1926, Levine 1998).

King Rails breed locally from Kansas, eastern Nebraska, Iowa, and Minnesota east across the northern United States and southern Ontario to southern New England, south to southern Texas, southern Louisiana, central Mississippi, central Alabama and southern Florida; Cuba; and the interior of Mexico. The greatest densities occur in the Atlantic and Gulf coast marshes, and in the rice belts of Louisiana, Arkansas, and Texas (Meanley 1969). The King Rail winters along the Gulf and Atlantic coasts from Mexico to New York and in the lower Mississippi Valley (Meanly 1969, 1992).

The King Rail is a large (15-19 inches), chicken-sized rail with a slightly down-curved bill. Its wingspan is approximately 20 inches and it weighs between 10 and 13 ounces. It has tawny edges on the black-centered back feathers and tawny wing coverts. The head is slate colored with brown or grayish cheeks and buffy eyebrows. The underparts are cinnamon and the flanks are strongly barred black and white. Juveniles are darker above and paler below. The nest has been described as a round, elevated platform with a saucer-shaped depression. It usually has a round or cone-shaped canopy and a ramp. The eggs are pale buff with brown spots or blotches. King Rails have a distinctive call of a series of fewer than 10 kek-kek-kek notes that are fairly evenly spaced (Meanley 1969, 1992).

The King Rail is a very secretive bird, creating well-concealed nests in the shallow parts of marshes on tussoks or clumps of grass. Between 9 and 14 eggs are laid during May and early August with incubation lasting 21-23 days. Both parents tend to the young. King Rails aggressively defend their nests and will chase away any species that comes close. They become solitary after the breeding season and prefer to migrate alone at night (Meanly 1969, 1992).

The majority of the King Rail diet consists of crustateans and aquatic insects but various grains and seeds are also consumed, especially in winter (Meanly 1969).

King Rails begin to migrate to their breeding grounds in April, with courtship and egg laying occurring in late April to mid-July. The eggs hatch between June and early August. Non-resident birds (in the northern portion of the range) begin their migration to wintering areas in September. King Rails seen during the winter in New York may be local year-round residents (Andrle et al. 1988, Meanly 1992, Levine 1998).

The time of year you would expect to find King Rail active and reproducing in New York.

Gochfeld, M. 1975. A review of the status of the king rail, Rallus elegans, in the metropolitan New York area and rail vocalizations. Engelhardtia. 6 (2):27-29.