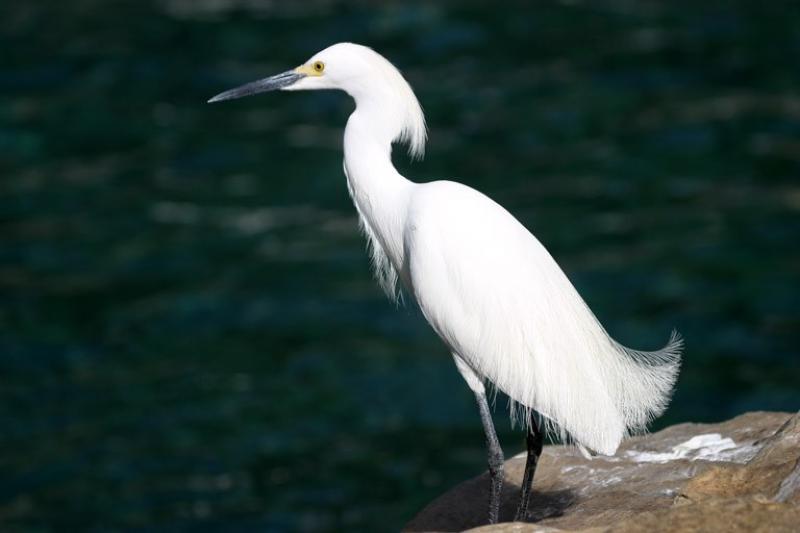 Snowy Egrets use their bright yellow feet to stir up sediments in the water and frighten prey out of hiding places (Willard 1977 and Hom 1983 cited in Parsons and Master 2000).

The Snowy Egret is known to occur in nine counties in New York State including Bronx, Erie, Kings, Nassau, New York, Queens, Richmond, Suffolk, and Westchester counties (McGowan and Corwin InPress, New York Natural Heritage Program 2007). After the population reached its peak during a period of fluctuation in the mid-1970s, numbers appear to have declined slightly in recent years (Peterson cited in Andrle and Carroll 1988). In general, Snowy Egret populations are declining along the Atlantic Coast (Parsons and Master 2000) and nationwide (Kushlan et al. 2002 cited in McGowan and Corwin In Press).

Brown et al. (2001) discovered that there were approximately 904 nesting pairs of Snowy Egrets on Long Island between 1974 and 1995. The number of nesting pairs in Jamaica Bay Wildlife Refuge declined between 1976 and 1993 (Brown et al. 2001). The species is also found in the Niagara Basin (New York Breeding Bird Atlas 2000-2005, New York Natural Heritage Program 2007) and the statewide population of Snowy Egrets in recent years has undergone cycles of growth and decline (McGowan and Corwin In Press). The first Breeding Bird Atlas in New York (1980-1985) reported Snowy Egrets in 34 probable or confirmed breeding blocks (Andrle and Carroll 1988), while the second Atlas (2000-2005) reported them in 29 probable or confirmed breeding blocks (McGowan and Corwin In Press). This represents a 15% decline over the two atlases in the number of confirmed or probable breeding blocks where Snowy Egrets were found.

The first records of Snowy Egret breeding in New York occurred in the 1880s, in limited numbers, on the coastal islands of Long Island (McGowan and Corwin In Press). During this time frame and the early 1900s, Snowy Egrets became extirpated from the state due to overhunting for their plumes, which were in high demand for the hat trade. They were listed as extirpated in the state in the 1920s (Peterson 1988 cited in Andrle and Carroll 1988). They were first seen breeding again in Suffolk County in 1949 following legislation which protected migratory birds (Bull 1974). In the mid-1970s, the population reached its peak, and after a period of fluctuation during the 1970s and 1980s, now averages 780 nesting pairs per season (McGowan and Corwin In Press).

As habitat loss is the largest known threat to Snowy Egrets, continuing to protect lands such as the Jamaica Bay Wildlife Refuge and other managed areas is important to the conservation of this species and other colonial waterbirds (Brown et al. 2001). Limiting predation and human activity through the use of predator exclosures, visitor education, and by posting restricted signs in breeding and foraging areas would also be beneficial. Any habitat restoration efforts should consider increasing the availability of pool and open water habitat, as foraging habitat availability may be a limiting factor for egrets (Trocki and Paton 2006). Another consideration for the management of breeding Snowy Egrets is the use of buffers around colonies to reduce flushing responses to human disturbance (Peters and Otis 2006). Vehicle disturbances, especially in undeveloped areas, have been shown to cause a decline in foraging rates for this species, with seasonal differences in behavioral response (Stolen 2003, Traut and Hostetler 2003). This suggests that buffer zones could provide additional protection.

Further studies are needed to understand how this species is affected by habitat loss from human activity. While many existing and potential threats have been identified, further knowledge about how these threats interplay and affect Snowy Egret behavior and population viability would better inform management decisions (Peters and Otis 2006). More complete information on breeding and foraging habitat requirements, reproductive ecology, and life history is needed for this species as well (McCrimmon 2006).

The Snowy Egret is known to breed in northern California, southern Idaho, Kansas, the lower Mississippi Valley, and Gulf and Atlantic coasts north to Maine, south through Mexico and the Antilles to South America (Spendelow and Patton 1988 cited in Nature Serve 2007). Wintering grounds include northern California, southwestern Arizona, the Gulf Coast, and South Carolina southward through the breeding range. In the United States, areas with the highest densities in winter include the Gulf Coast along the Texas-Louisiana border, the mouth of the Mississippi River, the lower Colorado River, and Florida (Root 1988 cited in Nature Serve 2007). Snowy Egrets may occur irregularly outside usual range, and have been observed a few times in Hawaii (Nature Serve 2007).

The Snowy Egret is a medium-sized, white heron that is 56-66 cm in length and has a wingspan of 100 cm and a body mass of 370 g. They have black legs with yellow feet and a black bill (Parsons and Master 2000). During breeding season, long, white plumes trail from the throat and the rump. They are known to nest in colonies with others of the same species or another heron species (Budliger and Kennedy 2005). They nest in trees or shrubs or, in some areas, on the ground or in marsh vegetation (Spendelow and Patton 1988 cited in Parsons and Master 2000). Clutch size is 3-5 pale blue-green eggs which are incubated for 20-24 days (Budliger and Kennedy 2005). Vocalizations include a raspy "raarr" or nasal "hraaa" (Sibley 2000) and low croaks and a bouncy "wulla-wulla-wulla" on breeding grounds (Budliger and Kennedy 2005).

On the coast, this species is rare before late March and after November (New York Natural Heritage Program 2007).

The time of year you would expect to find Snowy Egret active and reproducing in New York.