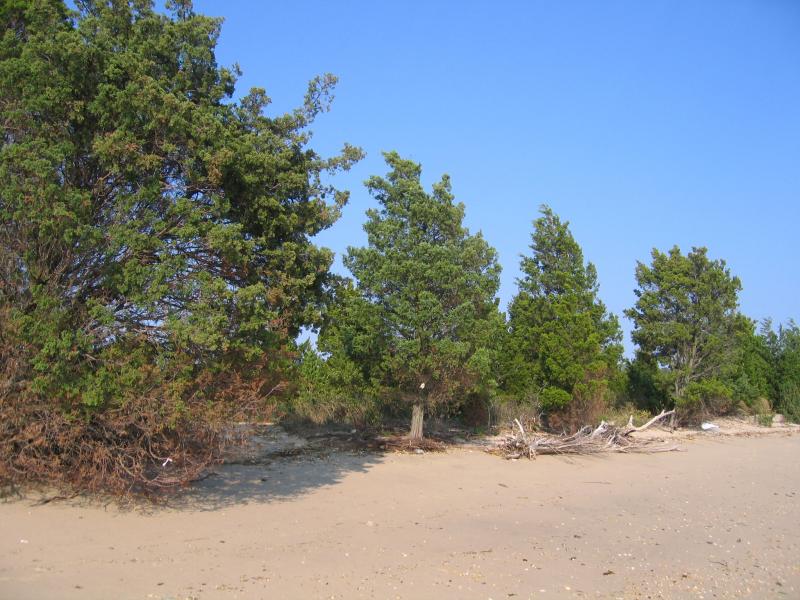 Eastern prickly-pear (Opuntia humifusa) is the only member of the cactus family that is found in the northeastern states. It is found in a variety of habitats and is tolerant of extreme conditions, including the salt spray and wind influence of maritime red cedar forests. However, it is shade intolerant, and can be crowded out by the increasing canopy cover of forests. New York's only native cactus is often associated with red cedar. Interestingly, it grows in maritime red cedar forests on Long Island and red cedar rocky summits in the Hudson Valley.

There are very few occurrences of maritime red cedar forests in New York State. The only examples come from Suffolk County, Long Island. These occurrences are usually small and vulnerable to disturbance or destruction from development, wood-cutting or post-cutting, and off-road vehicle (ORV) abuse. Most of the known occurrences are on publicly owned property but need more protection.

The numbers and acreage of maritime red cedar forests in New York have probably declined slightly in recent decades due to development, fire suppression, and disturbance by off-road vehicles (ORVs).

The numbers and acreage of maritime red cedar forests in New York have probably had large declines from historical numbers due to the settlement and development of the area, fire suppression, and fragmentation.

The greatest threats to the maritime red cedar forest are commercial and residential development and recreational overuse. Development not only causes a reduction in the overall size of the forest but also the fragmentation of the forest into smaller units. The increased use of off-road vehicles (ORVs) causes erosion, fragmentation of the forest, and acts as a corridor for the invasion of exotic species. Presently, most of the ORV use is on the seaward edges of the community. Other threats include over-browsing by deer on seedlings and saplings which threatens the regeneration of forest canopy trees.

Management should focus on activities that help maintain regeneration of the species associated with this community. Deer have been shown to have negative effects on forest understories (Miller et al. 1992, Augustine & French 1998, Knight 2003) and management efforts should strive to ensure that regenerating trees and shrubs are not so heavily browsed that they cannot replace overstory trees. Other management considerations are: avoid cutting old growth examples, monitor for off road vehicle (ORV) abuse, control exotic and invasive species including the removal of black pine (Pinus nigra), and provide signage to make sure that visitors stay on trails.

Soils are sandy in and around this community and the effect of clearing and construction on soil retention and erosion must be considered during any development activities. Similarly, these sandy soils are nutrient-poor and any soil enrichment activities (septic leach fields, fertilized lawns, etc.) have a high probability of altering community structure and function.

Research is needed to better define the composition of maritime and/or dune forests on Long Island in order to characterize variations between them. Collect sufficient plot data to support this classification. Locate other occurrences of maritime red cedar forests.

Maritime red cedar forests are currently found only on the shores of the coastal plain of Long Island within the zone influenced by salt spray. There are very few occurrences of this community type currently documented.

This maritime forest to woodland community dominated by red cedar (Juniperus virginiana) occurs on sand dunes, upper edges of salt marshes, and less commonly on rocky headlands of the northern and mid-Atlantic coast. This maritime forest to woodland community is naturally restricted to major coastal dune systems. An estimated 30 occurrences of this community type exist, ranging in size from less than an acre up to a maximum of 100, with an average size of less than 10 acres. This association occurs along the northern and mid-Atlantic coast from Virginia to Massachusetts and possibly up to Maine and Quebec (NatureServe Explorer 2009).

Known examples of this community have been found at elevations between 5 feet and 7 feet.

This maritime red cedar forest is probably best seen in September and October when the bluish-black berry-like fruit ripens and migrating birds such as Cedar Waxwing can be seen devouring the berries. 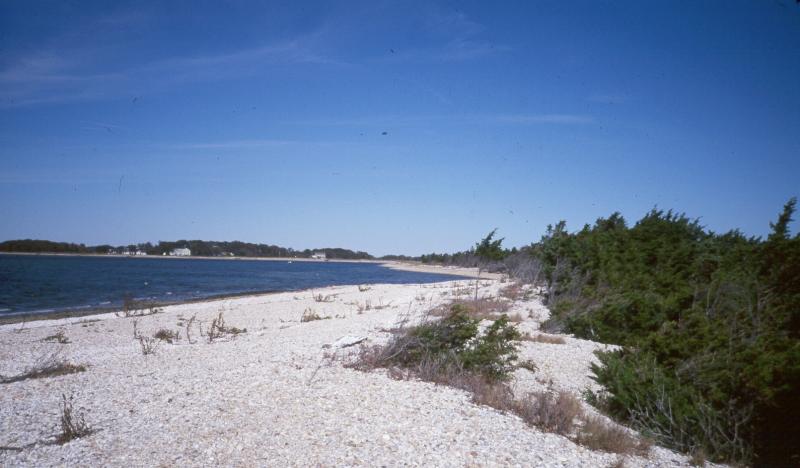