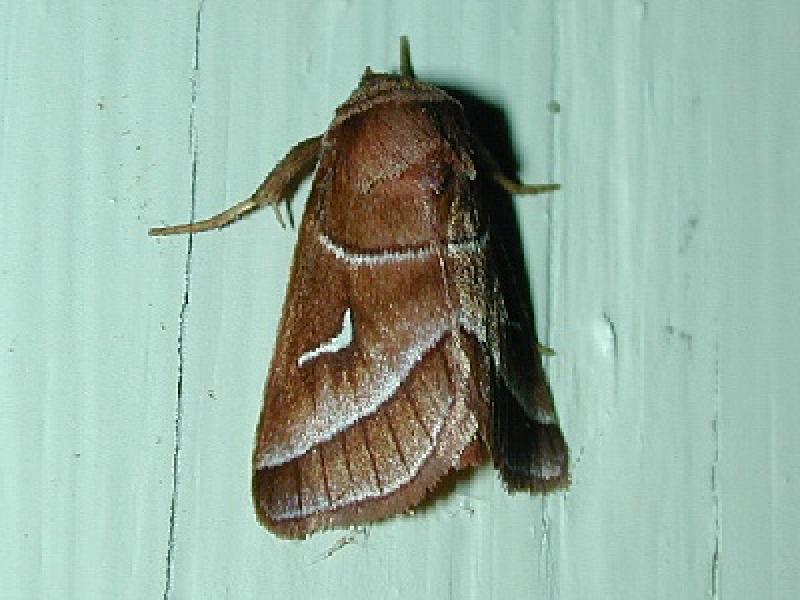 Fagitana littera has been impacted by habitat loss and, in the past, by DDT spraying for mosquitoes and spongy moths.

This species has been impacted by loss of habitat and DDT spraying in the past. There are approximately five recent localities documented for this species in southeastern New York, including Long Island. Additional populations are expected to exist, but it is unknown how many.

Historical loss of habitat, DDT spraying in the 1950s aimed at mosquitoes and spongy moths, and possibly use of modern biocides aimed at mosquitoes, likely led to the extirpation of some populations. Latham (1953) reports additional populations that were lost to annual burning of marshes. However, several decades have since passed which should have been sufficient for it to recover. This species' ability as a colonizer has enabled it to reach small artificial habitats and to recolonize after fires in southern New Jersey, and it is likely that it has rebounded on Long Island as recent records suggest.

The most immediate threat is invasive plants such as purple loosestrife (Lythrum salicaria) and common reed (Phragmites australis), although for some acidic bogs this may not be a threat. Mosquito spraying could be a threat in New York. It is very unlikely modern spongy moth (Lymantria dispar) suppression programs would target habitats for this moth and even less likely that Bt (Bacillus thuringiensis - a bacterial control used on spongy moth caterpillars) would impact larvae in June and later. While populations near Orient, Long Island were eradicated by annual burning (Latham 1953), this is not likely to be a threat today.

Recommended management includes maintaining an open habitat, control of invasive plants, and minimizing pesticide use at occupied sites. Deer will not likely negatively impact this species because of the foodplant and habitat that it occurs in.

Documenting the foodplants used by this species, in addition to Marsh Fern (Thelypteris palustris) would facilitate inventory. The old records from the Adirondacks require further investigation.

Fagitana littera is primarily a species of unforested wetlands such as coastal bogs, shrub swamps, and marshes. In New Jersey, this species also occurs along wet powerlines, and from New Jersey southward the species is characteristic of wet open pinelands. In northern Ohio, all four known occurrences are in bogs (Rings et al. 1992), but in Wisconsin the species is characteristic of open to shrubby wetlands in general (Ferge and Balogh 2000). From Latham's (1953) account, the main habitat near Orient, Long Island, was marshland, although he found the larva in a cranberry bog near Riverhead. The recent Columbia County collection was in a rather diverse calcareous wetland complex. It is also reported as a wetland species in Quebec (Handfield 1999). Acid bogs and calcareous fens might be the most likely places to find this species in New York, based on New Jersey and New England habitats, but it could occupy other types of unforested wetlands.

The species is probably still widespread on Long Island, with several collections since 2000. There is also one collection in Westchester County in 2007 and one in Columbia County in 1989. It is presumably also still present in the Adirondack region, but the details are unavailable. This species has not turned up recently in Albany County where it was known historically. Leonard (1926) also had records for Rye, Poughkeepsie, and the "Adirondacks". Since this species occurs in the Great Lakes region, it could also turn up in western New York.

This is primarily a coastal species from Nova Scotia to central Florida, but it does extend inland across southern parts of Quebec and Ontario to Wisconsin, mostly in the Great Lakes region, but also including northwestern New Jersey, southeastern New York, and the Adirondacks. F. littera is apparently not known from central or western New York or Pennsylvania.

Please refer to a published illustration such as Handfield (1999), Rings et al. (1992), or Rockburne and Lafontaine (1976). There are no similar species in North America.

The Marsh Fern Moth is 16mm long, fawn-colored with forewing a clouded rusty brown along the costa and in the median area. White-edged rusty antemedial and postmedial lines are present with "7-shaped" white reniform spots. There is a white terminal line with orange fringe (Beadle and Leckie 2012).

The adult is best for identification purposes. Suspected larvae should be reared to adults to confirm the species.

The adults are nocturnal. The fact they are not collected commonly anywhere suggests that, like many Noctuidae, they do not come readily to lights. However, there is no other known method to find them. The larvae apparently remain on the ferns at all times.

The only documented foodplant is Marsh Fern (Thelypteris palustris), but at least south of New York few habitats have that fern. It is not certain which other ferns are used, but Dale Schweitzer (NatureServe) suspects that Virginia Chain Fern (Woodwardia virginica) is the usual foodplant in New Jersey.

Based on collection dates in Ohio, Wisconsin, and New England, the expected flight season in New York would be most of June into early July with the larvae occurring after the adults. A field collected larva pupated 4 July, suggesting the larval stage takes less than a month, and a moth emerged on 26 July (Latham 1953). Collection dates for specimens from Orient, Long Island were 4 June to 12 July for 20 specimens (Latham 1953), which is very comparable to recent literature. There may be a partial second brood in New Jersey (in July) and southward, but probably not in New York, although Latham (1953) states "published records into September". While Latham thought that the eggs might overwinter, it is much more likely that pupae do instead.

The time of year you would expect to find Marsh Fern Moth reproducing, larvae present and active, and pupae or prepupae present in New York. 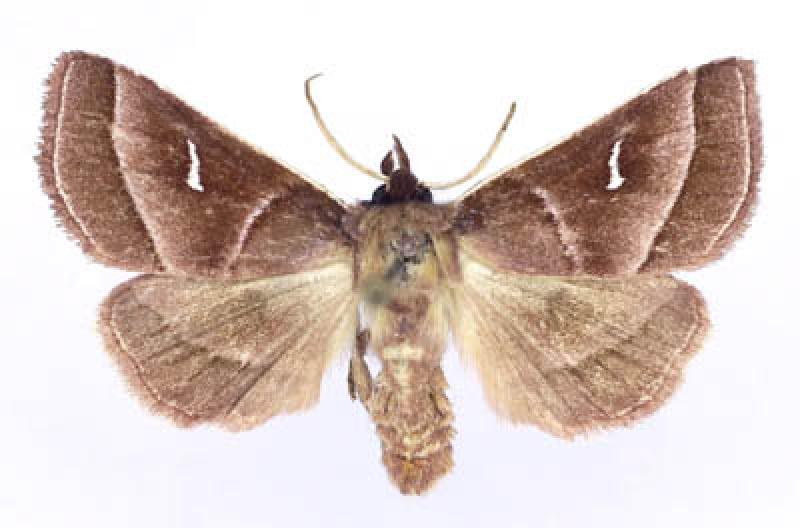 There are no closely related or similar species in North America.

Latham, Roy. 1953. Fagitana littera reared from a larva. Journal of the Lepidoterists' Society 7:172

This guide was authored by: Dale Schweitzer