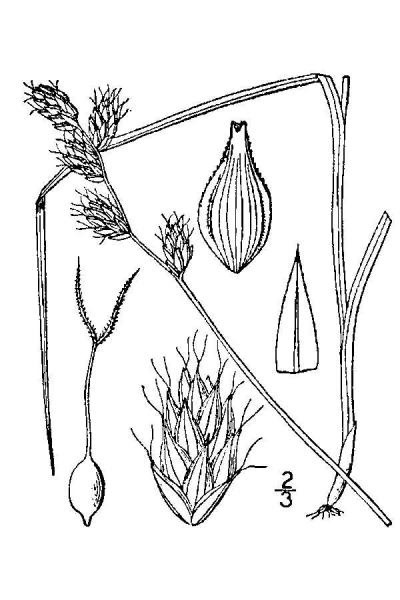 Hormathodes means necklace-like (Fernald 1970) which is in reference to the spikes on the stems which appear somewhat like beads on a necklace. Some other species fit this description as well.

There are fifteen known populations and over 20 historical sites. Many of the known sites are small or within degraded habitats. This plant is located along the upper borders of marsh habitats, a habitat that has been widely manipulated and subject to significant invasive species challenges. Phragmites and development have been the prime threats. As many as ten of the former historical locations are now extirpated. Additional populations are likley, but these may be small and also threatened by invasive species.

There are about 15 populations that have been seen in recent years. One population has over 100 plants. Three populations have under 50 plants. The extent and number of plants at the other populations is unknown. The limiting factor at many sites may be the extent of available habitat. Overall, short term trends are unclear.

In addition to the about 15 known extant populations there are at least 20 and probably up to about 30 populations that are only known from historical records. It is unknown if these populations are still extant. There are six populations which are known from Queens and Staten Island that are believed extirpated due to urban development. Long term trends clearly indicate a decline at least in the New York City region.

A few populations appear to be threatened by the invasive non-native species common reed (Phragmites australis ssp. australis). Trampling by people is another threat. Potential threats include habitat alteration due to road expansion and ditching.

Historical populations need to be surveyed to determine if they are still extant.

Carex hormathodes occurs most commonly in and adjacent to salt or brackish coastal, or rarely slightly inland, tidal marshes. In these settings it can occur in dune swales and on dry or wet sands. It also grows in fens, on margins of wetlands, and in wet forests adjacent to the coast (New York Natural Heritage Program 2006). Maritime rock ledges, brackish or freshwater marshes, moist coastal sands at sea level (Mastrogiuseppe et al. 2002). Brackish to fresh marshes, sands and rocks near the coast (Fernald 1970). Salt marshes and borders of salt marshes along the coast (Mackenzie 1931-1935).

Carex hormathodes occurs adjacent to the ocean and brackish marshes mostly throughout Long Island and parts of New York City although many of the New York City populations are believed extirpated. There are also two populations reported from just north of New York City along the Hudson River. The most northern population occurs near the Bear Mountain Bridge in Orange Co. This population should be verified. There is a record from Yates County in central New York, collected by Sartwell. Sartwell wrote Penn Yan, Yates County on many of his specimen labels and it is clear that in many cases he was referring to where he lived and not where he collected the plant. Carex hormathodes does not grow away from the coast and clearly does not occur in Yates Co.

Carex hormathodes occurs near the coast often within meters of the shoreline. It is known from Newfoundland and Quebec south along the coast to North Carolina (Mastrogiuseppe 2002).

Marsh straw sedge is a tufted grass-like perennial. There are 3-5 leaves per stem. These are strap-like and 1-3 mm wide. Stems are 20-80 cm tall and are taller than the leaves. Towards the top of the stems are 3-9 stalkless flower/fruit clusters (spikes). The upper part of the stem, where the spikes occur, nods. The spikes are 6-15 mm long, widest in the middle, and are composed of female flowers above and male flowers below. The female flowers develop into fruits (perigynia) which are 3.8-5.6 mm long and taper at their apex to a beak.

Carex hormathodes is densely cespitose and short rhizomatous. Leaf sheaths are green-veined adaxially with at most a short hyaline area at the summits. Leaf blades are 1-3 mm wide. The reproductive culms are 20-80 cm long and are terminated by a nodding inflorescence 2.5-6.0 mm long. There are 3-9 gynecandrous spikes that are distant or the upper somewhat approximate, ellipsoid, and gradually taper to the apex and base. The staminate portion of the lateral spikes is equal to or less than 2 mm. Pistillate scales are lanceolate and are acuminate to awned at their apex. Perigynia spread, are lance-ovate to barely obovate, 1.9-2.8 mm wide, and 3.8-5.6 mm long. Perigynium beaks are less than half the length of the body (Mastrogiuseppe et al. 2002).

The easiest time to identify C. hormathodes is when it possess just immature to mature perigynia which are not easily shedding.

Carex hormathodes is the only Ovales sedge in New York, besides Carex silicea, that will appear in saline to brackish waters and sands. With Carex silicea, the pistillate scales are as long as or longer than the perigynia they subtend and are acute at the apex. In comparison, C. hormathodes has pistillate scales that are shorter than the perigynia they subtend and are acuminate to awned at the apex.

Immature perigynia start in mid-June. These mature and persist till early August or sometimes later. Towards the end of this season the perigynia are shedding easily and the inflorescences tend to be more congested and less typical. Therefore, the best time to survey for C. hormathodes is from mid-June through July.

The time of year you would expect to find Marsh Straw Sedge fruiting in New York.

Carex hormathodes is in section Ovales. It is sometimes treated as a variety of C. straminea, as in Gleason and Cronquist (1991), but C. hormathodes is distinct morphologically, ecologically, and geographically (Mastrogiuseppe et al. 2002).