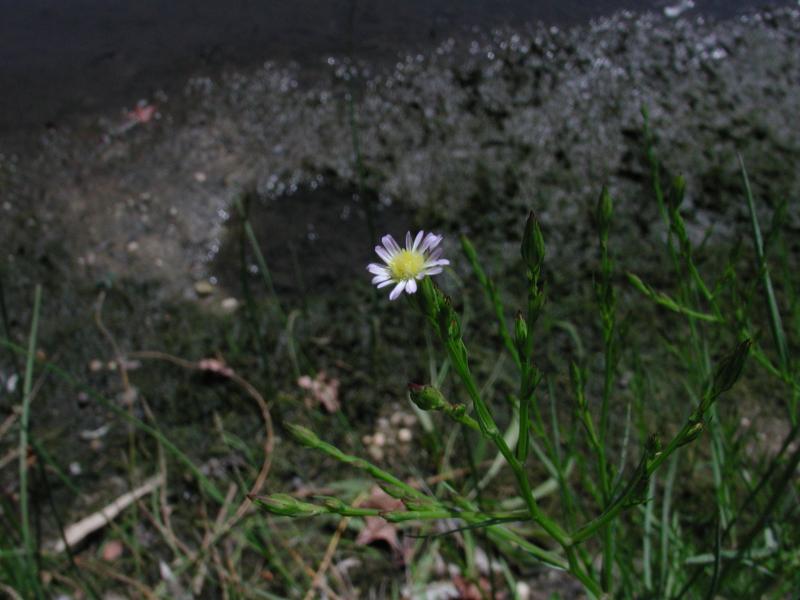 Saltmarsh aster is the only native aster in New York which is an annual (Brouillet et al. 2006). The scientific name subulatum means awl-shaped (Fernald 1970) and is perhaps in reference to the shape of the involucral bracts.

There are currently 13 known extant populations. At least an additonal 18 populations have not been seen in recent years and are considered historical. One population is believed to have been extirpated due to habitat destruction. Some of the historical populations occur in and around the New York City metropolitan area and have likely been extirpated. Overall, the habitat for this species is limited in New York and much of this habitat has been damaged or destroyed.

One population has become extirpated within the past 20 years. There is very little other data available to indicate what the short-term trends are for this species in New York. Overall, it appears that this species may be at least slightly declining in recent years.

The invasive common reed should be controlled and deer populations should be reduced to historical levels. Salt and brackish marshes should be protected from human-created disturbances such as ditching or development.

Populations that are only known from historical occurrences should be surveyed to determine if they are still extant. Known extant sites need to be periodically monitored and surveyed.

In New York, Symphyotrichum subulatum occurs along the shores of Long Island west to Brooklyn and Staten Island then north along the edges of the Hudson River to Putnam and Rockland Counties. There is also one disjunct population near Syracuse (New York Natural Heritage Program 2007).

Symphyotrichum subulatum var. subulatum occurs along the gulf coast from Texas to Florida and then along the Atlantic coast from Florida north to Maine. It is disjunct further north in New Brunswick. It is also apparently native around Syracuse, New York, having been known there since at least 1883. Other inland populations are known west to Nebraska but at least some of these are apparently introductions around salted habitats (Sunderberg 1986, Nesom 2005, Brouillet et al. 2006, New York Natural Heritage Program 2007).

Saltmarsh aster is an annual herbaceous plant that grows up to 1 m in height. The stems become branched towards their summits. Its narrow linear leaves are scattered along the stems. Like all members of the sunflower family the "flowers" are actually clusters of numerous small flowers (flower heads). These flower heads occur at the summit of the plants and are composed of yellow disc flowers (the central inner flowers) and white ray flowers (the marginal outer flowers) (Gleason and Cronquist 1991, Brouillet et al. 2006).

Symphyotrichum subulatum is best identified when it is in flower. The underground taproots are useful in its identification and voucher specimens should include these if the population is large enough.

Symphyotrichum ciliatum (rayless annual aster) is a non-native species in New York that occurs in salt-influenced habitats such as roadsides although it may also be found in saltmarshes. Like S. subulatum it is an annual. Symphyotrichum ciliatum differs in its sparsely ciliate involucral bracts, strigose achenes, and lack of ray florets (truly only lacking the ray of the ray florets) vs. non-ciliate involucral bracts, glabrate achenes, and distinct although small ray florets for S. subulatum (Semple et al. 2002, Brouillet et al. 2006).

Since saltmarsh aster can easily be overlooked when vegetative, the best time to survey for this species is from August through mid-October when it is in flower.

The time of year you would expect to find Annual Saltmarsh Aster flowering in New York. 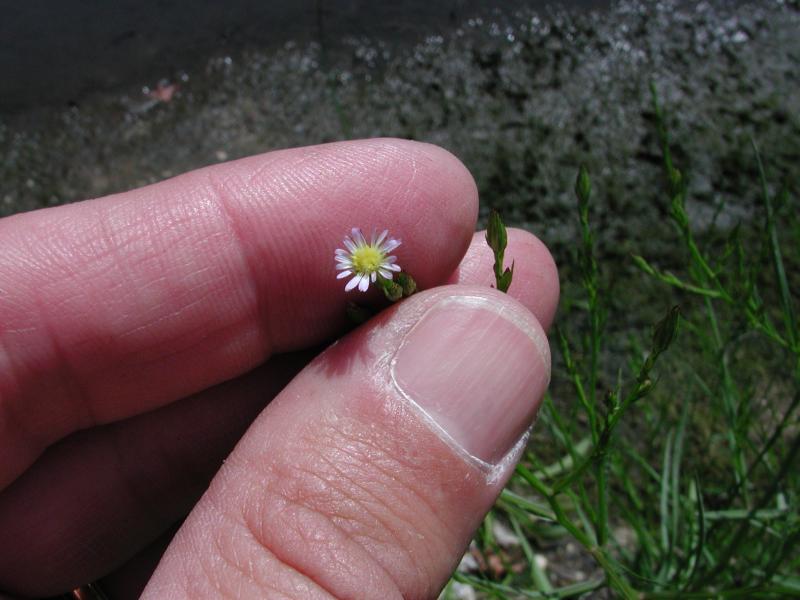 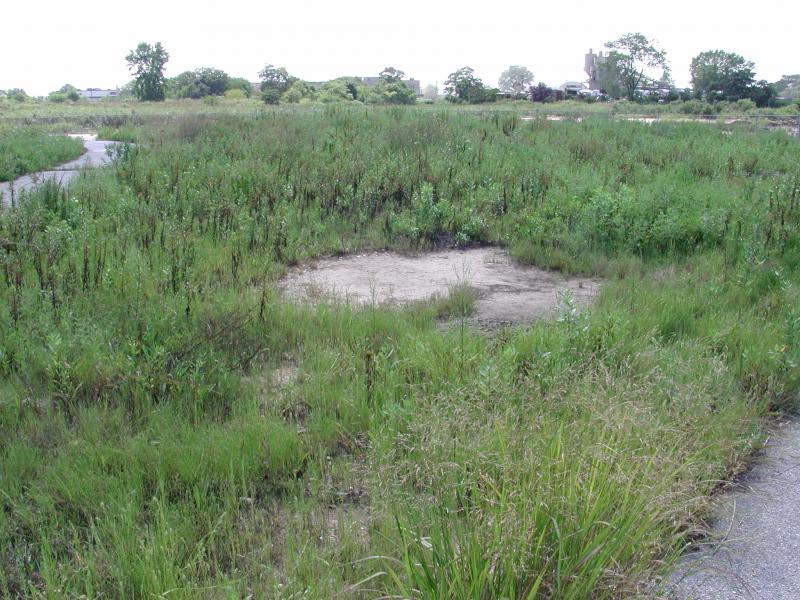 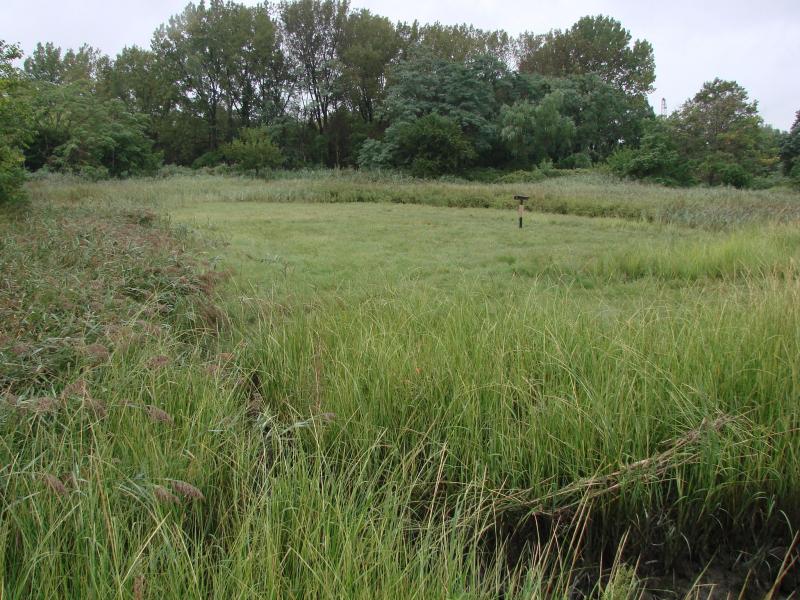 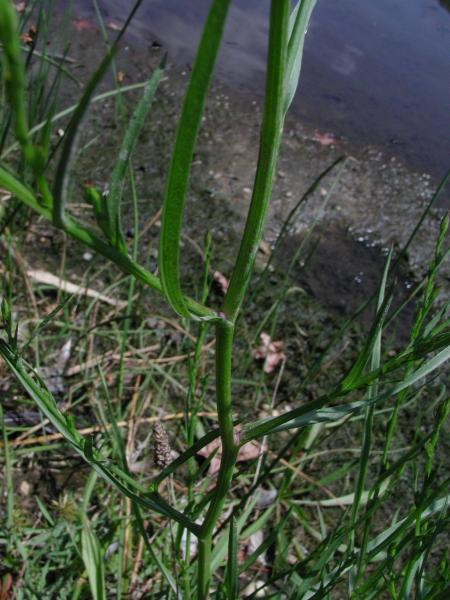 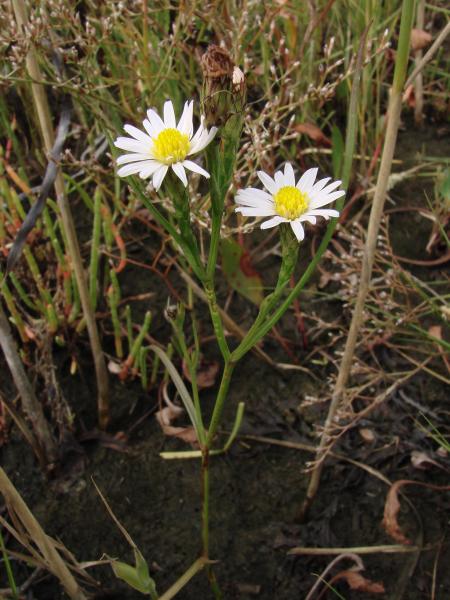