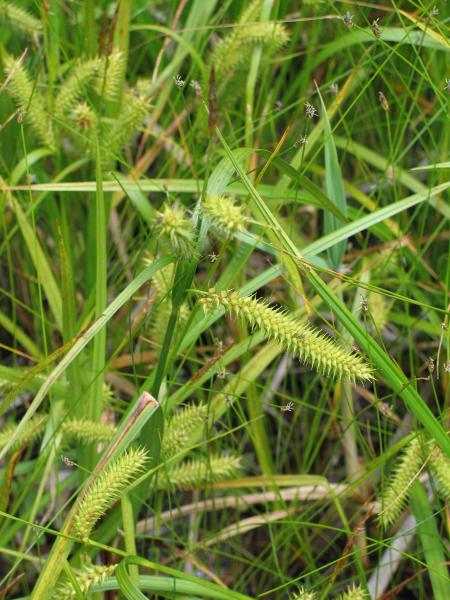 The specific epithet schweinitzii was named in honor of Lewis David de Schweinitz (1780-1834) who among other subjects studied the genus Carex.

There are seventeen known populations and nearly 50 historical locations. Some of these historical locations could not be relocated after multiple survey attempts; however, new populations have been found elsewhere. This plant prefers calcareous seeps, a habitat type with a very limited range. New York has a large number populations compared to other states, so it carries a higher responsibility in ensuring this species' long-term survival. Michigan and Ontario also appear to have a large number of populations.

About twenty populations have been seen within the past 20 years. Most of these appear to be stable. There are also many (up to about 50) additional populations which are known only from historical records. Overall, short term trends are not definitive but appear to indicate that Carex schweinitzii is currently stable in New York.

Most of the extant populations are not currently threatened. Some are potentially threatened by mowing, residential development, road maintenance, succession of habitat, and changes in hydrology.

Many populations occur on unprotected land that is fragile. These areas should be protected with agreements with the landowners or purchased by conservation organizations. Road work and clearing for utility corridors should be done with consideration of avoiding negatively impacting populations and the hydrology of habitats where populations occur.

Survey work to historical populations is needed to assess whether these populations are still extant. Some populations occur in utility corridors that are kept open by various management practices. Research should be conducted on how populations respond to these management actions.

Carex schweinitzii grows in strongly calcareous, perennially wet, seepy habitats often in association with rich fens. It is commonly found on edges of fens. It also occurs in calcareous marshes, swamps, and shores. It does particularly well in and on the margins of rivulets and small drainage channels that have strongly calcareous water. This includes perennially wet roadside ditches which act as drainage channels. It does well in full sun but also occurs in more shaded environments. Adjacent vegetation is often low and moss cover is usually high although it can occur with taller species such as Typha latiflolia. It frequently occurs in dense patches sometimes to the exclusion of other plants (New York Natural Heritage Program 2006). Shallow cold streams, springheads, seeps, margins of fens, and seepy stream, pond, and lakeshores in open or lightly shaded sites, in highly calcareous soils (Reznicek and Ford 2002). Cool shady streambanks (Gleason and Cronquist 1991). A species of wet ground along cold spring-fed rivers and brooks, in mixed or coniferous cover (Voss 1972). Calcareous swamps, meadows and low woods (Fernald 1970).

Carex schweinitzii is found throughout most of the state although it is absent from the Adirondacks. It is mostly found widely scattered in disjunct, isolated populations. In parts of central New York it very abundant with numerous populations.

Carex schweinitzii is uncommon throughout most of its range but can form large colonies where it is found. It occurs from Connecticut and Vermont west to New York, Ontario, Michigan, and Wisconsin south to Virginia (Reznicek and Ford 2002).

Schweinitz' sedge is a grass-like perennial that occurs in patches. Its leaves are 4-11 mm wide and often occur in small tufts, sometimes without flowering stems. When present, flowering/fruiting stems 18-65 cm long arise from the leaves at the bases of the plants and are terminated by a narrowly cylindrical cluster (spike) of male flowers. Secondary stems branch off of the main stems in the upper part of the plants and are terminated by narrowly cylindrical spikes of female flowers/fruits. Fruits (perigynia) are 4.2-7.0 mm long.

Carex schweinitzii is a long rhizomatous colonial perennial. Leaves are 4-11 mm wide and reproductive culms are 18-65 cm long. There are 2-4 lateral pistillate spikes. Pistillate spikes have perigynia mostly densely arranged. The proximal part of the pistillate spikes gradually taper to the subtending peduncle and have perigynia less densely arranged. The lowest pistillate spike can be erect but more often and with age, is spreading to recurved. The terminal spike is staminate. Staminate scales are acute to acuminate and smooth except at the tip. Perigynia are 7-11 veined, 4.2-7.0 mm long, and taper to a bidentate beak (Reznicek and Ford 2002, New York Natural Heritage Program 2006).

The easist time to identify C. schweinitzii is when perigynia are just immature to mature but are not yet shedding.

Carex schweinitzii is a very distinctive plant especially in the field although the inflorescences some what resemble C. lurida, C. baileyi, and C. hystericina. The colonial habit and often spreading to recurved proximal pistillate spikes which taper at their bases, are good field characteristics (New York Natural Heritage Program 2006). Other characters that separate C. schweinitzii include: elongate rhizomes; plants not cespitose; staminate scales acute to acuminate and smooth margined except at tip; and perigynia 7-11 veined. Carex lurida, C. baileyi, and C. hystericina have short rhizomes; are densely cespitose; and staminate scales have scabrous awns. C. hystericina also has perigynia with 13-21 veins (Reznicek and Ford 2002).

Carex schweinitzii starts to fruit in the very end of May and sometimes the fruits can persist as late as August. In the early part of this season the fruits are quite immature and late in the season they are shedding readily. Therefore, the best time to survey for this species is from about mid June till mid July.

The time of year you would expect to find Schweinitz's Sedge fruiting in New York. 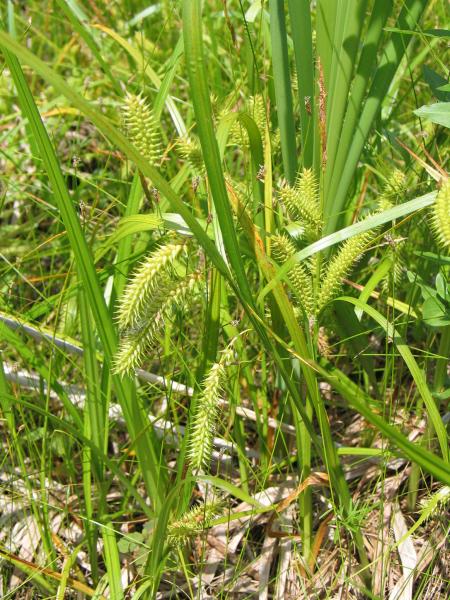 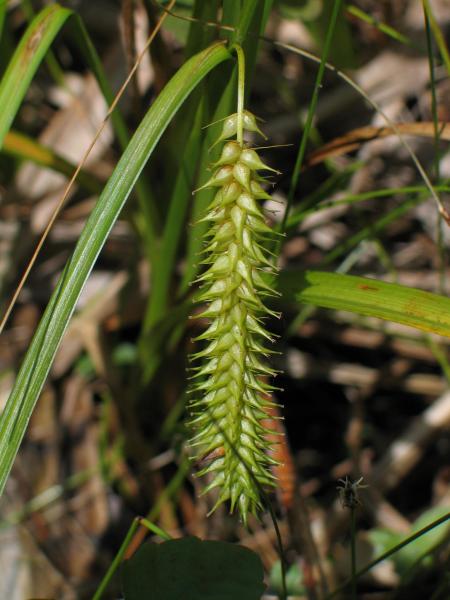 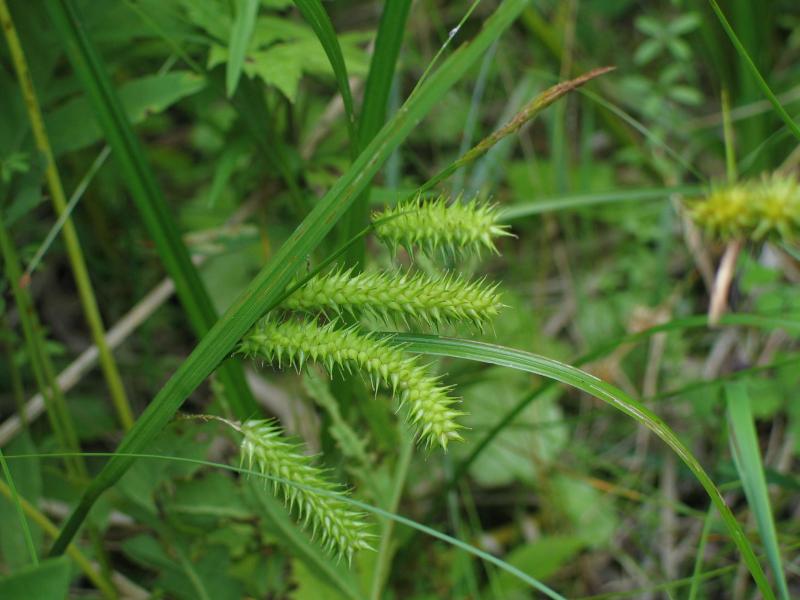 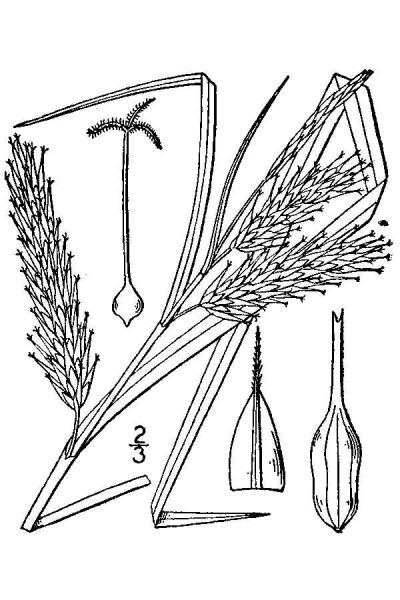 Carex schweinitzii has a simple taxonomic history and is a very distinct species. It is in section Vesicariae (Reznicek and Ford 2002).