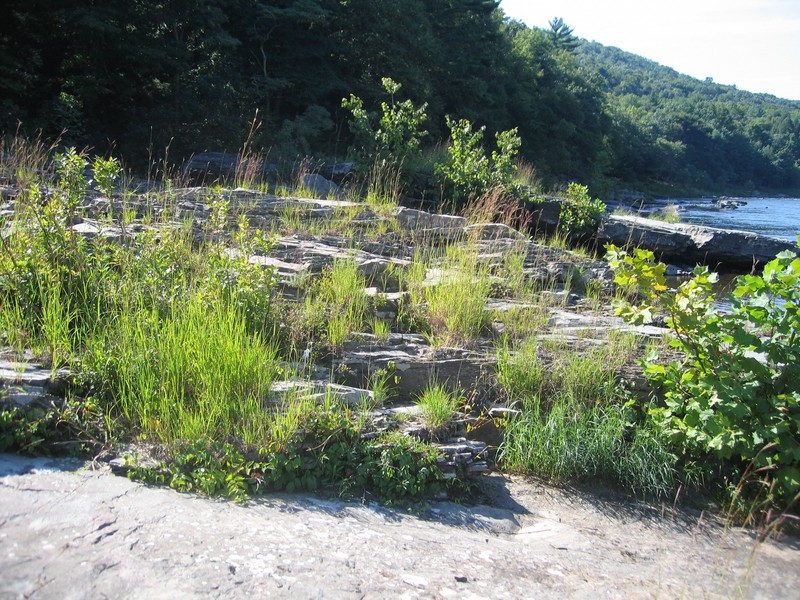 Shoreline outcrops can be sparsely vegetated and species rich at the same time. Plants take root in the cracks of the bedrock where soil accumulates and those not in the cracks are eventually scoured away. However, several dozen species of plants can survive in those cracks (see partial plant list below) making this community very diverse despite the low percent cover of vegetation.

There are a couple thousand occurrences statewide. A few documented occurrences have good viability and many are protected on public land or private conservation land. This community is limited to areas along rivers and lakes with non-calcareous bedrock outcrop and there are only a few high quality examples currently documented. The current trend of this community is probably stable for occurrences on public land, or declining slightly elsewhere due to moderate threats that include shoreline development, trampling by visitors, and invasive species.

The number and acreage of shoreline outcrops in New York have probably declined slightly in recent decades as a result of shoreline development, trampling by visitors, and invasive species.

The number and acreage of shoreline outcrops in New York have probably declined moderately from historical numbers likely correlated with past shoreline development, trampling by visitors, and invasive species.

Where practical, establish and maintain a natural forested buffer to reduce storm-water, pollution, and nutrient run-off, while simultaneously capturing sediments before they reach the shoreline. Avoid habitat alteration along the shoreline and surrounding landscape. Restore shoreline outcrop communities that have been unnaturally disturbed (e.g., remove obsolete impoundments in order to restore the natural hydrology). Prevent the spread of invasive exotic species into the shoreline outcrop through appropriate direct management, and by minimizing potential dispersal corridors, such as roads and bridges.

Where practical, establish and maintain a natural riparian buffer to filter storm-water, pollution, and nutrient run-off from surrounding uplands and to capture sediments before they reach the shoreline outcrop. Avoid habitat alteration along the shoreline and in surrounding landscape. Minimize potential dispersal corridors for exotic species, such as roads and bridges. Maintain or restore the natural flood and ice scour regime.

Survey for occurrences statewide to advance documentation and classification of shoreline outcrops. Continue searching for large sites in excellent to good condition (A- to AB-ranked).

This community is widespread throughout upstate New York, north of the North Atlantic Coast Ecoregion.

A community that occurs along the shores of lakes and streams on outcrops of non-calcareous rocks such as anorthosite, granite, quartzite, sandstone, gneiss, or schist. The shoreline is exposed to wave action and ice scour. The vegetation is sparse; most plants are rooted in rock crevices.

Known examples of this community have been found at elevations between 95 feet and 1,722 feet.

While this community can be identified anytime during the snow-free seasons, it is most enjoyable to visit during the growing season, from late May through summer, when plants are flowering and water temperatures are conducive to wading. 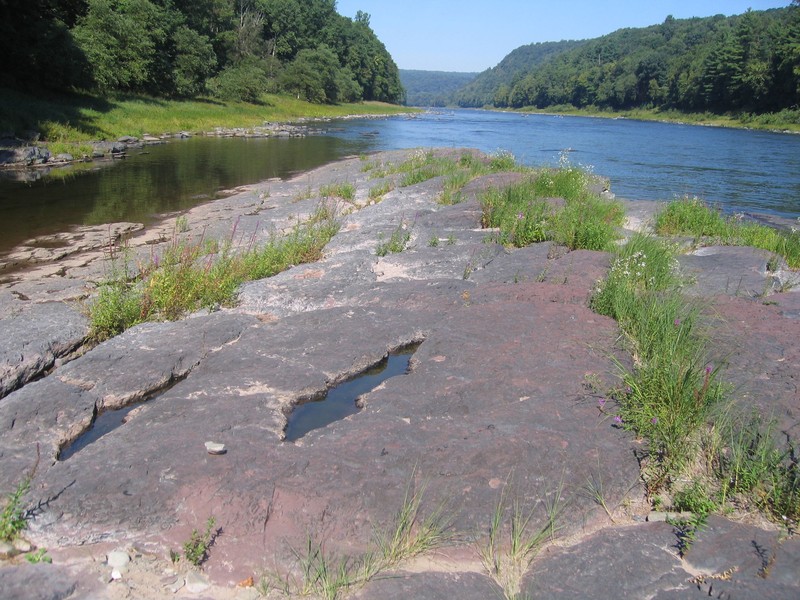 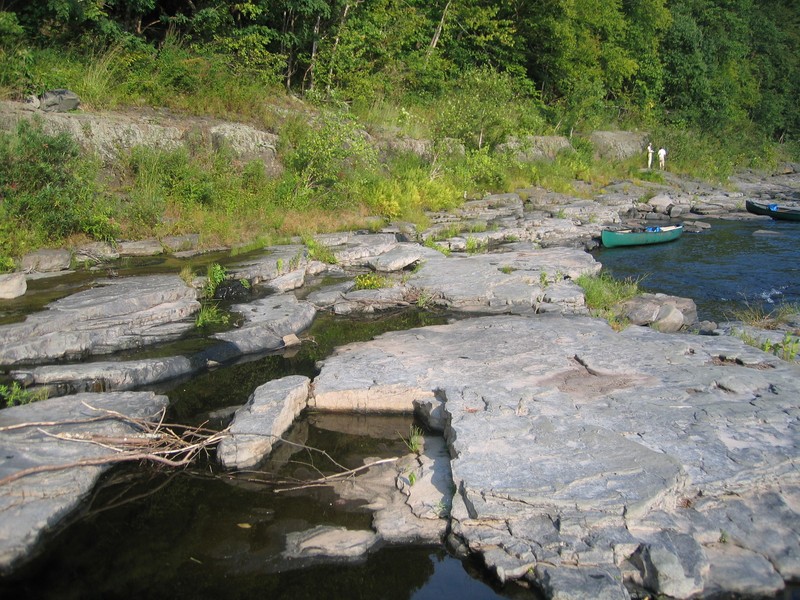 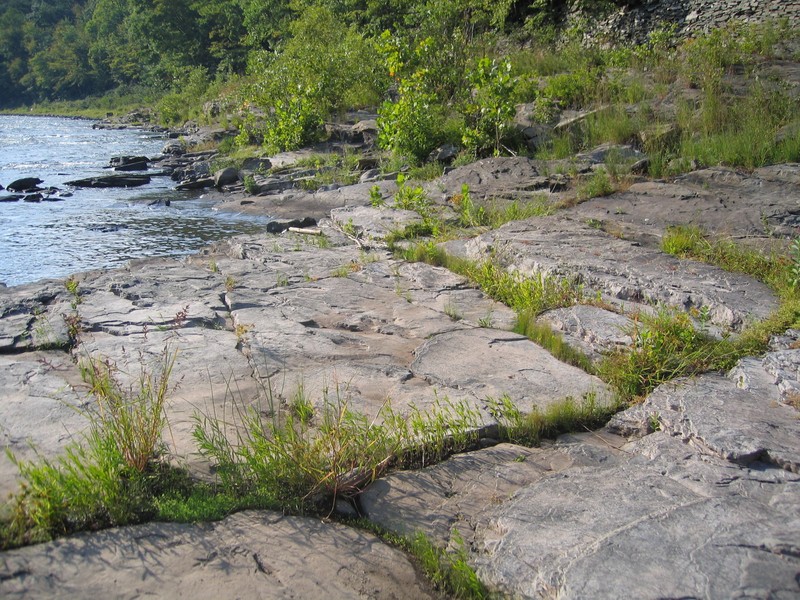 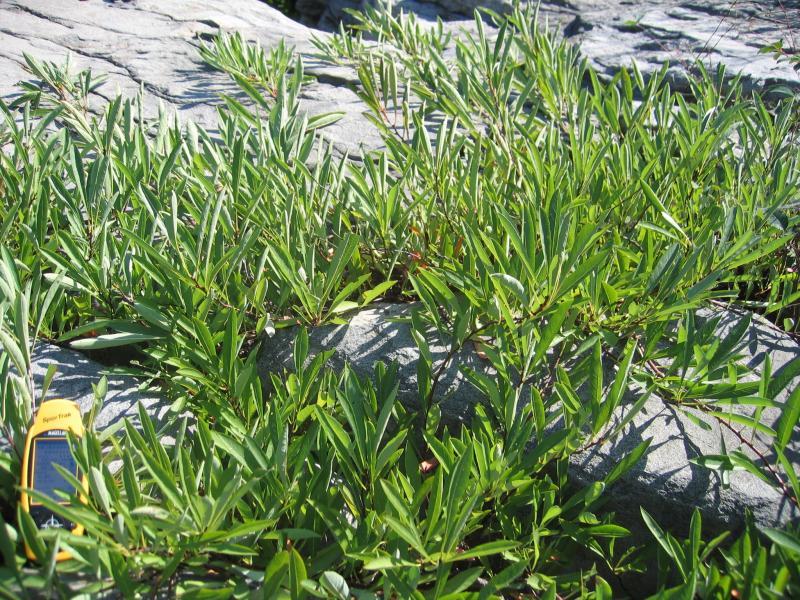 This figure helps visualize the structure and "look" or "feel" of a typical Shoreline Outcrop. Each bar represents the amount of "coverage" for all the species growing at that height. Because layers overlap (shrubs may grow under trees, for example), the shaded regions can add up to more than 100%.