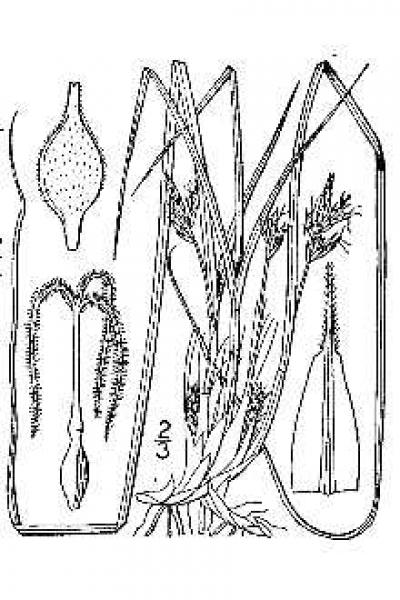 Just a few years ago, this sedge was considered historical within New York (i.e. not seen in at least 20 years). David Werier rediscovered this sedge and he and others have been finding more populations. As more people learn to identify this plant, more populations will likely be encountered.

There are eight existing populations and about 10 historical populations but more of this species are likely to be found in the Hudson Highlands if surveys are done early enough to identify the species before it sheds its perigynia.

It has become abundantly clear that this sedge is being overlooked in New York. Survey work in southeastern New York early in the season (May to early June) will help clarify what the abundance of this sedge is in New York.

In New York, C. nigromarginata is found in rocky dry-mesic to mesic deciduous forests. Often these forests are of southern affinity and have oaks dominant. It is also known from coastal oak forests. Less frequently it occurs in more open rocky environments. It prefers S and E facing slopes probably because it is a southern plant at the northern edge of its range (New York Natural Heritage Program 2005). Acidic soils of rocky, dry woods, thickets, and clearings, in partial shade of mixed hardwood-pine forests or full sun along open roadsides and clearing edges, often adjacent to streams (Flora of North America 2002). Dry wooded slopes (Rhoads and Block 2000). Dry woods, chiefly in acid soils on the coastal plain (Gleason and Cronquist 1991). Dry woods, thickets, and clearings (Fernald 1970).

In New York, populations are known only from the southeastern part of the state; from Long Island north to the southern Hudson Valley (Orange and perhaps Ulster County). A specimen of C. pedunculata from Monroe County was erroneously labeled C. nigromarginata and led to false reports of C. nigromarginata from Monroe County. There is a disjunct population known from Ontario on the northern edge of Lake Ontario (Reznicek and Catling 1982) so Carex nigromarginata should be sought in more southern habitats in other parts of New York.

A plant typical of the dry woods from Quebec and Ontario south along the Atlantic Coast and west to the Mississippi Valley; possibly disjunct to Saskatchewan.

Cusick (1992) describes Carex nigromarginata as "a beautiful sedge with brightly-colored scales of rich chestnut or purple with a green midrib".

The plants are perennial herbs, 4-12 in. tall, growing in dense tufts, often producing short branches which root. The whole plant often has a flattened appearance as if it had been stepped on. Each stem produces a single inflorescence with these flowering stems of varying height. Some of the culms are short and hidden in the leaves while others are longer and more apparent. The principal leaf blades are very narrow (1.4-4.5 mm wide) and mostly arising from the base. The flowers are unisexual. Staminate flowers occur on the end of the elongated flower structure, the pistillate below. Staminate flowers contain three small, slender, erect stamens which project beyond the petals when pollen is produced. There are 1-4 pistillate flowers (usually 2 or 3) up to .25 in. long, stemless, often crowded, and the lowest sometimes slightly separated but overlapping the next above. The small dry fruit does not open at maturity, is three-angled or nearly round, and contains 3 stigmas. The scales that subtend the pistillate flowers/fruits are often dark red to dark purple sub-marginally. These scales also have a green mid-stripe and pale narrow margins (derived from Gleason 1952 and Crins and Rettig 2002).

Carex nigromarginata has the widest leaves (1.9-)2.2-3.4(-4.5) mm wide. The culms vary in height with the tallest one (measured from the base of the culm to the base of the inflorescence) (4.5) 5.4-17.4 (23.6) mm long. The inflorescence is composed of a terminal staminate spike and 2-3 lateral pistillate spikes, which arise toward the end of the culm (i.e. no basal spikes). All the spikes are approximate. The scales that subtend the pistillate flowers/perigynia are about the same length as the perigynia and usually have a dark-red to dark-purple sub-margin. The actual margin is often white or hyaline in a narrow stripe and the mid vein is green. Occasionally these scales are paler but in most populations most plants have the darker scales. Perigynia are (2.6-)2.8-4.0 mm long with ellipsoid bodies (Crins and Rettig 2002, New York Natural Heritage Program 2005).

This sedge is most easily identified while in fruit. Full ample specimens are useful for identification purposes. These specimens should include the entire plant (i.e. roots, stems, leaves, and fruit).

Carex umbellata, C. tonsa var. tonsa, and C. tonsa var. rugosperma should not be confused with C. nigromarginata. The former three all have at least some spikes arising from the base of the culm. These basal spikes can have elongated peduncles and therefore can appear to arise towards the upper parts of the culm. In addition, C. nigromarginata often has some culms that are very short but again these culms have all the spikes arising from the upper portion of the culm.

The species is one of the earliest of the sedges to flower and fruit. It flowers from early April to mid May and is in fruit from late April to early June. The best time to survey for this species is May to very early June.

The time of year you would expect to find Black-edged Sedge fruiting in New York.