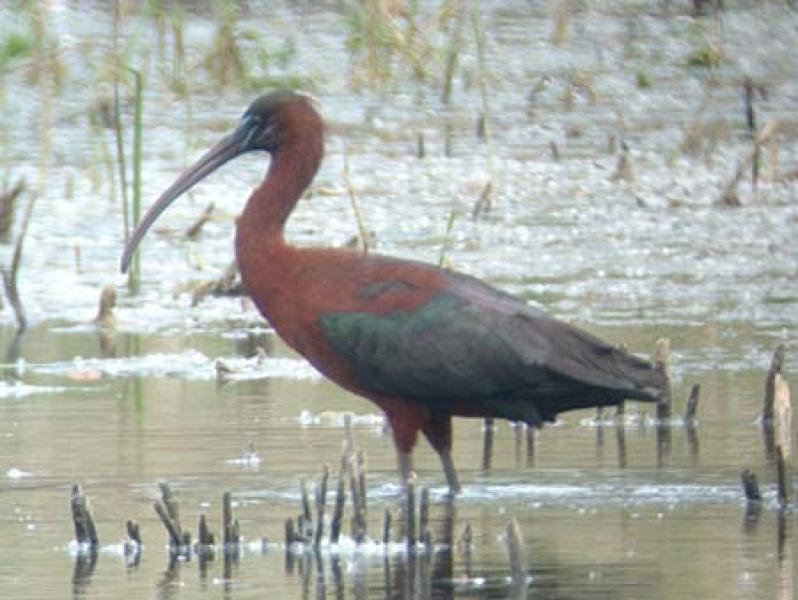 Due to its decurved bill and dark color when spotted from a distance, the Glossy Ibis is sometimes called the Black Curlew (Davis and Kricher 2000).

New York is near the northern limit of the Glossy Ibis' breeding range, with breeding populations being restricted to non-barrier and salt marsh islands in Long Island and around New York City, along with breeding on one of the Four Brothers Islands on southern Lake Champlain (McGowen and Corwin 2008; New York Natural Heritage Program 2009).

Glossy Ibis were first recorded as breeding in New York at Jamaica Bay National Wildlife Refuge in 1961, with three nesting pairs observed (Post 1962). In 1979, a maximum of 892 pairs were recorded in the New York City area and populations since then have been steadily declining. During the Breeding Bird Atlas surveys, the number of confirmed breeding blocks declined from 19 during the 1980-1985 surveys to 14 during the 2000-2005 surveys (McGowan and Corwin 2008). Surveys conducted under the New York City Audubon Harbor Herons Project show a 27% decline in the number of nests observed between 2004 (350 nests) to 2007 (254 nests), with nesting occurring on only three islands in the New York City area (Bernick 2007). During the 2007 Long Island Colonial Waterbird surveys conducted by the New York State Department of Environmental Conservation, Glossy Ibis were reported as active on 8 of the 29 known colonies around Long Island (New York State Department of Conservation 2007; New York Natural Heritage Program 2009).

The Range of the Glossy Ibis continues to expand worldwide. Populations in the United States have also been expanding from a local breeding population in Florida in the early 1900s to breeding populations occurring in every state along the Atlantic Coast except for New Hampshire, as well as breeding along Louisiana's Gulf Coast over the course of the 20th century. However, numbers of breeding Glossy Ibis have been on a decline since the 1970s. Due to their dark plumage, it is difficult to accurately survey for Glossy Ibis and numbers may fluctuate from year to year (Davis and Kritcher 2000).

Degradation of breeding and foraging habitat is the greatest threat to Glossy Ibis (McCrimmon 2006). Other threats include flooding, development, disturbance of nesting areas by human activity such as boating, fishing, and dredge spoil deposition, and predation primarily by gulls, fox, and raccoons (New York Natural Heritage Program 2009).

Current and potential breeding, foraging, and wintering areas should be protected. Continue to develop and conduct management and habitat restoration plans along with state, local, and federal partners. Continue to monitor populations and discuss ways to improve survey methods. Compare state population trends against regional trends to determine population dynamics across various geographic areas and time periods. Consider developing and initiating a banding program to get a better handle on breeding populations and migratory patterns (McCrimmon 2006).

In general, the Glossy Ibis is a poorly studied species. More information is needed regarding life history, breeding, and behavior (Davis and Kritcher 2000). Research is needed to identify key habitat characteristics necessary for breeding, foraging, and wintering areas. All potential threats should be identified including those created by human disturbance as well as predators, pathogens, and invasive species, and ways should be saught to diminish their impact (McCrimmon 2006).

Glossy Ibis breed in a variety of wetland habitats including fresh and saltwater marshes, swamps, mudflats, lagoons and mangroves, creating nests in shrubs and trees that are 2-5 m off the ground. The birds forage in shallow waters, fields, fresh and saltwater ponds and pools, impoundments, and mudflats (Davis and Kritcher 2000; NatureServe 2009). On Long Island, the birds gather to feed at salt marshes, especially in tidal creeks and pools. They also feed on flooded golf courses after heavy rains (Bull, 1974).

In New York, Glossy Ibis have been observed breeding on the non-barrier and saltmarsh islands of southern Long Island as well as Gardiners Island and South Dumpling Island along Long Island's eastern shore, and islands around Staten Island and New York City. In 1999, nesting was observed on one of the Four Brothers Islands in southern Lake Champlain (McGowan and Corwin 2008; New York Natural Heritage Program 2009).

Glossy Ibis are found on every continent except for Antarctica. Its range is the most extensive of the ibis species. In North America their range is restricted to the Atlantic and Gulf Coasts of the United States, breeding along the shoreline from Maine to Louisiana. Glossy Ibis also breeds in the Caribbean mainly on the islands of Cuba and Jamaica. Breeding has also been recorded on the shores of Mexico, Costa Rica, and Venezuela (Davis and Kricher 2000). Glossy Ibis winter along the east coast from southern North Carolina down through their southern breeding range and occasionally in the Bahamas and Panama. The greatest concentration of overwintering birds occurs in Florida (Davis and Kricher 2000, NatureServe 2009).

The Glossy Ibis is a small to medium-sized bird 45-65 cm in length with a wingspan averaging 90 cm (Peterson 1980; National Geographic Society 1999). They are easily identified by their long brownish grey bill that curves downward. From a distance the birds appear black in color. Adults in breeding plumage are rich brown-red in color, the back, wings, and tail are bronzy with some glossy purple and green. The bare skin around the bill and eye changes from grey to dark blue-black with a pale whitish-blue edge running along the top and bottom of the eye. The iris is brown. The legs are gray-green and during breeding season, the joints turn red. Nonbreeding adult plumage is similar to breeding plumage but the colors are duller. Males and females are similar in color but females are smaller. Juveniles are lighter and duller in color than adults and have some white streaking on their face, head, throat, and foreneck. Hatchlings are semialtricial and have sparse down that is mostly black with some white on the throat and white-orange on the head. The bill is pink and has black bands at the base, middle, and tip. The legs are yellow and feet are pink. Eggs are elliptical to ovate in shape, averaging 50 mm by 40 mm in size. The surface of the egg is smooth or finely pitted and deep greenish blue in color. Nests are a platform of twigs lined with leaves and are about 35 cm across and 5 to 10 cm deep. The Glossy Ibis has very few vocalizations and is mostly silent. The begging call of chicks sounds like a buzzing. Adults emit a low krunk krunk sound and chatter and grunt when in flocks (Baynard 1913; Bent 1962; Davis and Kritcher 2000).

The brownish down curved bill, brown iris, olive colored legs, and incomplete white margin around the bare parts of the face of the adults during breeding season make the Glossy Ibis distinguishable from other Ibis species (Peterson 1980; National Geographic Society 1999).

Glossy Ibis can be easily identified when the adults are in their breeding plumage.

Glossy Ibis are colonial nesters. They arrive at their breeding grounds in the spring and establish pair bonds shortly after. Both male and female assist in nest construction, with the male doing most of the building. Eggs are laid down shortly after the nest is built with one egg being laid per day until the clutch is complete (3-5 eggs). The incubation period lasts on average 20 days with both parents taking turns. Hatching is asynchronous and occasionally results in mortality of younger chicks (Baynard 1913). In New York, egg dates are between May and July with chicks fledging beginning in July and continuing to September. (Bull 1974). Glossy Ibis will renest if unsuccessful and will also use abandoned nests of other wading birds (Baynard 1913).

Glossy Ibis feed on a variety of invertebrates including crayfish, dragonfly larvae, caddisflies, worms, grasshoppers, small mussels and clams, and occasionally grains. They forage in same-species groups or among other wading birds and probe the shallow waters and mudflats with their bill in search of pray (Baynard 1913; Bent 1926; Erwin 1983; Davis and Kritcher 2000).

In New York, Glossy Ibis begin to arrive during the spring (April-May) and remain throughout the breeding season (Post 1962). They begin their fall migration to their wintering grounds in mid-August-October (Davis and Kritcher 2000).

The time of year you would expect to find Glossy Ibis active and reproducing in New York. 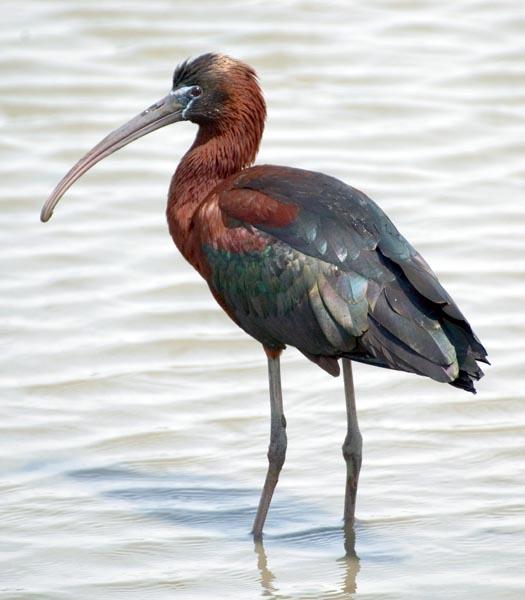