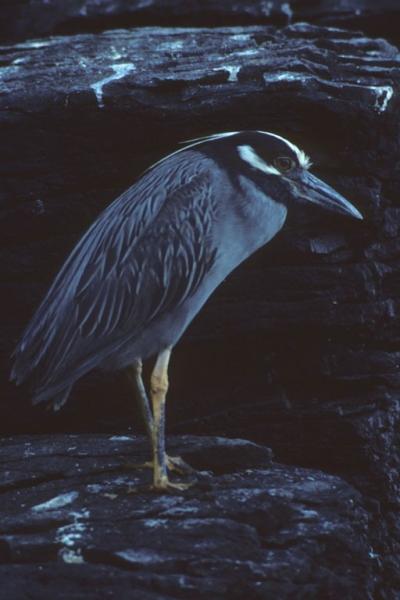 The breeding population of Yellow-crowned Night-herons in New York appears to be stable, but fluctuations can occur based on changes in availability of habitat and food sources (McCrimmon 2006). An accurate breeding and productivity census is difficult to obtain, since nests are typically made under dense forest canopy cover and are hard to spot (Watts 1995). A comparison of data from the first Breeding Bird Atlas of 1980-1985 with the second atlas of 2000-2005 shows a slight increase in the number of blocks that reported probable or confirmed breeding of Yellow-crowned Night-herons (20 during the first atlas and 23 during the second atlas). New nesting locations west of Staten Island and further inland along the Hudson river between Rockland and Westchester Counties were also reported during the second atlas. (McCrimmon 2006)

Little is known about the range of the Yellow-crowned Night-heron before the 1900s. Between the 1920s and 1960s, they underwent a significant range expansion, during which several northern states reported breeding occurrences for the first time (Watts 1995).

Breeding and foraging habitat loss due to climate change and human activity, and human disturbance at nest sites are critical threats to Yellow-crowned Night-herons (Watts 1995, McCrimmon 2006). Shifts in temperature can also have negative effects on the heron's main food source, crustaceans, because the emergence of crustaceans is typically temperature dependant (Watts 1995).

In order to maintain good-quality nesting and foraging habitat for Yellow-crowned Night-herons, habitat management and restoration projects, along with a management plan for colonial-nesting herons, is needed (McCrimmon 2006).

More research is needed on the general biology, ecology, and distribution of Yellow-crowned Night-herons, especially juveniles. Investigation of how their food source being temperature dependent affects the heron's breeding and distribution is also needed. (Watts 1995)

Yellow-crowned Night-herons are colonial nesters, often nesting with Black-crowned Night-herons and other similar heron species. They can be found in marshes, swamps, lakes, lagoons, and mangrove swamps, depending on geographical location. In New York, Yellow-crowned Night-herons nest and feed in low, coastal shrubland, dredge spoil, on salt marsh islands, and in woodlands near swamps, rivers, and harbors in the lower Hudson and Long Island Bays. They will also nest in wooded neighborhoods that are near water and food sources. (Andrle and Carroll 1988, Watts 1995)

New York State is at or near the northern limit of the Yellow-crowned Night-heron's range, with breeding occurrences restricted to the Lower Hudson-Long Island Bays, namely around northwestern Suffolk County, the eastern end and southwestern shore of Long Island, along the northwestern shore of Long Island Sound in Westchester County, and at a few locations in Nassau County, of which several are historical. It is rarely observed inland. (Andrle and Carroll 1985, Levine 1998, McCrimmon 2006)

The breeding range of the Yellow-crowned Night-heron extends from the eastern coast of North America from Massachusetts to Florida, from Minnesota and Wisconsin south to the Gulf Coast, from central Baja California to central Sonora, central and northeastern Texas, Oklahoma, northeastern Kansas, and along both coasts of Central and South America from Mexico to northwestern Peru and eastern Brazil, the Galapagos, Bahamas, and Antilles. Yellow-crowned Night-herons primarily winter in southern Florida, but they also winter along the Gulf Coast from Louisiana to eastern Texas, Baja California, Central America and the Caribbean. (Watts 1995, Levine 1998)

The Yellow-crowned Night-heron is a dark-colored, stocky heron with a straight, stout, dark bill. The average adult length is 55-70 cm, with a wingspan of 107 cm. Adults have a buffy-white crown on top of their head with long, white plumes, a black face with white cheek patches, and a slim, gray neck. The body and under parts are bluish-gray. The back and wing feathers are dark gray-blue with a light gray edge, giving them a scaled appearance. Shoulder feathers are similar and often extend beyond the tail. The legs are yellowish green. Juveniles have dusky upperparts with fine white streaks and spots, and dark-streaked underparts. Yellow-crowned Night-herons have several call sounds. The "Scaup" call is often uttered in series when disturbed and when taking flight, and "Whoop" and "Huh" calls can be heard throughout the day, frequently at sunrise and sunset. Nests are typically constructed in trees 5-12 feet above ground and consist of a platform of sticks with a depression in the middle. Sticks used are about 50 cm long and are taken from material surrounding the nest site. Nests may be used every year and get bigger over time. Two to five eggs are laid that are elliptical in shape and pale greenish-blue in color. (Watts 1995, Baicich and Harrison 1997)

The white crown and cheek patches on adult Yellow-crowned Night-herons are the most distinguishing characteristics.

Yellow-crowned Night-herons spend most of their time foraging. They use the "stand and wait, walk slowly" approach to locate food, meaning, they remain stationary until their meal is spotted and then slowly walk to it to catch it. Feeding occurrs throughout the day but during the breeding season, they tend to forage more in the early morning and evening. Yellow-crowned Night-herons typically nest once a season but if the nest fails, they will nest a second time. Egg laying occurs mainly in April-May in the northern part of their range. Clutch size usually is 2-5 eggs. Incubation lasts about 27 days. Adults care for the young for about 37 days and after fledging, the young may return to the nest site to roost for a few weeks. (Spendelow and Patton 1988, Watts 1995).

Yellow-crowned Night-herons feed almost exclusively on crustaceans. Species type varies geographically and on availability. In the northern part of the range, sand fiddler crabs, mud fiddler crabs, and marsh crabs are consumed the most. (Riegner 1982)

In New York, Yellow-crowned Night-herons return to their breeding areas in the Long Island Bays in April and head for their wintering grounds in early October. A winter sighting in the state is very rare.

The time of year you would expect to find Yellow-crowned Night-Heron active and reproducing in New York. 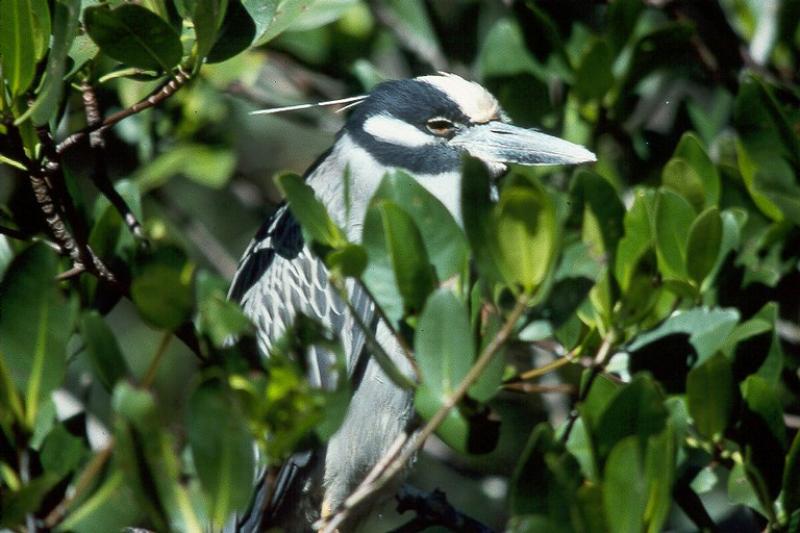 Information for this guide was last updated on: December 13, 2007