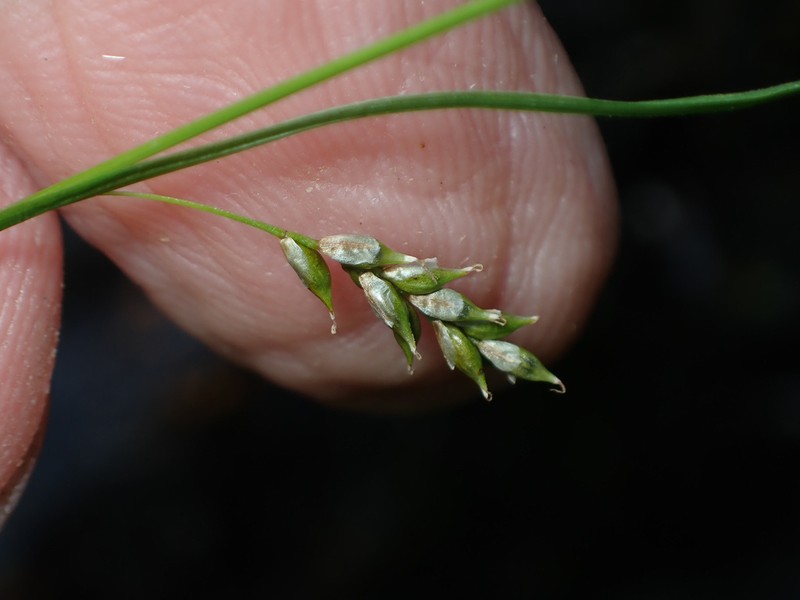 The specific epithet capillaris means hair like (Fernald 1970) which is probably in reference to the narrow culms and perhaps the relatively narrow leaves.

Only known from a single site in the Hudson River Gorge of Hamilton County with two additional historical sites in Cortland County and one in Onondaga County. Little information is known about any of these sites so more information is needed; however, it does seem clear that this plant was always rare within New York.

There are about three populations that are only known from historical records. Two of these populations appear to have been extirpated before the early 1900's. One was extirpated when work was done in the wetlands that provide water to the city of Cortland. The cause of extirpation at the other site is unknown. One populations was only recently discovered. This populations was probably overlooked in the past. Overall, it appears that C. capillaris has declined over the long term in New York.

There are currently no known threats to populations of C. capillaris in New York.

No management is currently needed for Carex capillaris in New York.

Carex capillaris is known (at least historically) from a few populations in central New York and one population in northern New York along the Hudson River gorge. New York is at the southern edge of its range in the east.

Carex capillaris occurs in North America and northern Eurasia. In North America, it is known from Alaska east to Nunavut and Greenland south to New Hampshire, New York, Michigan, Minnesota, South Dakota, New Mexico, Utah, Nevada, and California. In the west it is mostly in the mountains (Ball 2002).

Hair-like sedge is a densely tufted grass-like plant. Leaves are 0.75-4 mm wide and flat. Stems are very slender and are up to 60 cm long. The apex of the stem is terminated by a narrowly cylindrical cluster of male flowers 4-10 mm long. Towards the apex of the stem are 2-3 slender secondary branches that are terminated by cylindrical clusters of female flowers/fruits (spikes). The lower secondary branches and associated spikes droop. The female flowers mature into fruits (perigynia) which are 2.3-3.5 mm long and taper to a beak at their apex (Mackenzie 1931-1935, Ball 2002).

Carex capillaris is densely cespitose and short rhizomatous. Basal leaf sheaths are brown and somewhat fibrous. Leaf blades are mostly flat, glabrous, and (0.75-)1-4 mm wide. The culms are slender, much exceed the leaves, and are up to 60 cm long. The proximal bracts are leaf-like and usually are strongly exceeded by the culms. The terminal spike is staminate or occasionally gynecandrous, 4-10 mm long, and is equal to or overtopped by the distal most lateral spikes. There are 2-4 lateral pistillate spikes which are 5-20 cm long. They are on slender peduncles and the lower ones droop at maturity. Perigynia are 2.3-3.5 mm long, oblong-ovate, and taper to a 0.5-1.0 mm long beak (Ball 2002).

Carex capillaris is easiest to identify when it has just immature to mature perigynia.

Carex capillaris is a distinctive species and should not easily be confused with other species that occur in New York. It can be distinguished from members of section Hymenochlaenae by a combination of shorter pistillate spikes, brown versus usually red basal sheath bases, usually shorter perigynia lengths, and beaked versus sometimes non-beaked perigynia.

Immature perigynia start to form in mid-June. These mature and persist untill late July or early August. Towards the end of this season they are starting to shed easily. Therefore, the best time to survey for this species is from late June through July.

The time of year you would expect to find Hair-like Sedge fruiting in New York. 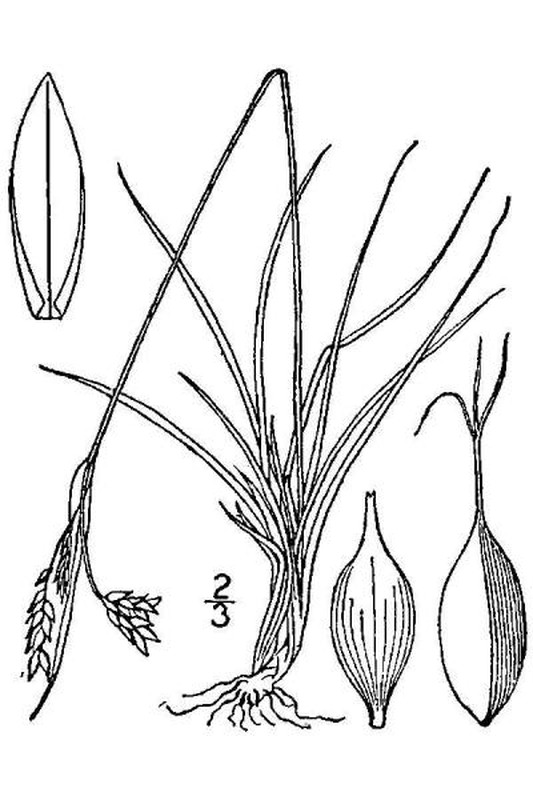 Carex capillaris is in section Chlorostachyae. It had previously been placed in section Capillares but Chlorostachyae is an older name (Mackenzie 1931-1935, Ball 2002). Carex capillaris is a variable circumboreal taxon. It is sometimes divided into two subspecific taxa. Southern plants, which include all plants from New York, are larger, have pale brown pistillate scales, and serrulate perigynium beaks. Apparently, these characters are not correlated and recent treatments only recognize one taxon. If recognized, the southern plants are called C. chlorostachya or C. capillaris ssp. capillaris (Ball 2002).