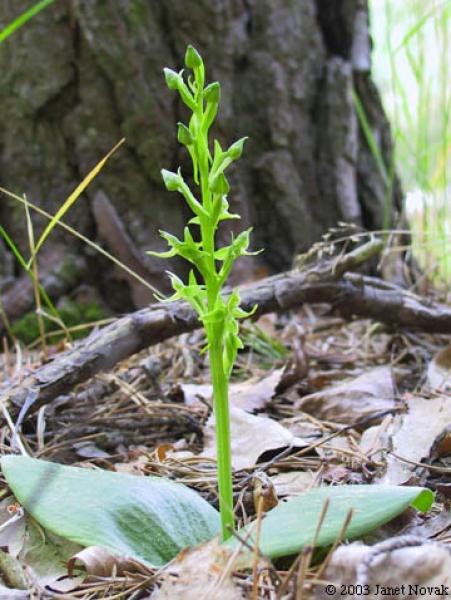 Similar to Platanthera orbiculata and Platanthera macrophylla, Platanthera hookeri has a pair of large rounded leaves that lie flat against the ground. In 19th-century Vermont the leaves were applied as a plaster to heal weak lungs, and to heal bruises and reduce soreness. The species was named by 19th-century English botanist John Lindley for his colleague Sir William Jackson Hooker, director of Kew Gardens in London. Lindley was instrumental in saving the garden from destruction in the 1830s.

There are four known populations. Two additional populations have been reported in the last 20 years that recent surveys have failed to relocate. Populations of this plant have declined sharply over the past 100 years. The reasons for this are unknown, but acid rain has been speculated as a likely cause.

Populations have persisted at very low levels over the past ten years. No more than five populations were known at any one time and now only two populations are known. This trend of small fluctuating numbers will probably continue into the foreseeable future.

The real reasons for the decline of this orchid are unknown. Substantial habitat remains throughout the state but past land management practices, habitat destruction, and other factors such as the increase in the deer herd, climate change, and pollution have all been suggested. More detailed research into its decline is needed.

Once more is known about the direct threats to these plants, appropriate management can be undertaken. With so few populations known today and the sharp decline observed over the past 100 years, frequent monitoring should take place to better understand the dynamics influencing these populations.

Research needs to be undertaken to discover why this plant is in severe decline throughout the state. More detailed studies on the demography of the species should also be done to understand the factors that influence its appearance each year.

Historically this orchid was reported throughout much of New York, ranging from the Hudson Valley and Adirondack foothills, west through central and western New York. Today it is only known from a few populations near Ithaca and the eastern Adirondack foothills.

A plant ranging from Newfoundland and Nova Scotia, south to New Jersey and Pennsylvania, and west to Manitoba, Minnesota, and Iowa.

Hooker's orchid grows up to 10 inches tall from two broadly rounded to widely oblong, thick, green leaves up to 6 inches long that lie flat on the ground. The green flowering stem has no leaves and is topped by an unbranched inflorescence of 10-15 yellowish-green flowers on flower stalks that arise at an upward angle from the stem. The flowers are only about 3/4 inch wide with a tongue-shaped lip that curls up at the end and a long spur that angles down at the back.

This orchid often does not flower, and identification based solely on the leaves is difficult. Plants with a flowering stalk are easiest to identify.

Depending where in the state you look, flowers may be observed sometime between mid-May to early August. The peak flowering period appears to be late June to early July. While plants often do not flower, surveys should nonetheless be conducted during the peak blooming period. Vegetative plants are more difficult to locate and identify.

The time of year you would expect to find Hooker's Orchid vegetative, flowering, and fruiting in New York. 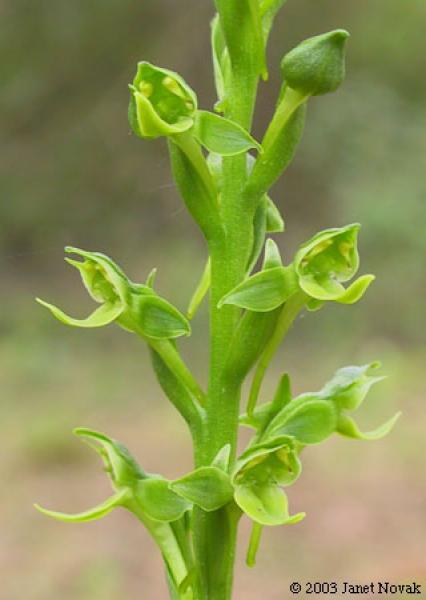 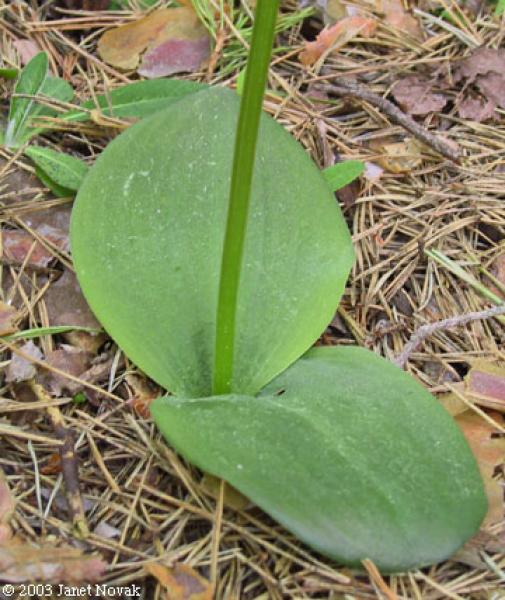 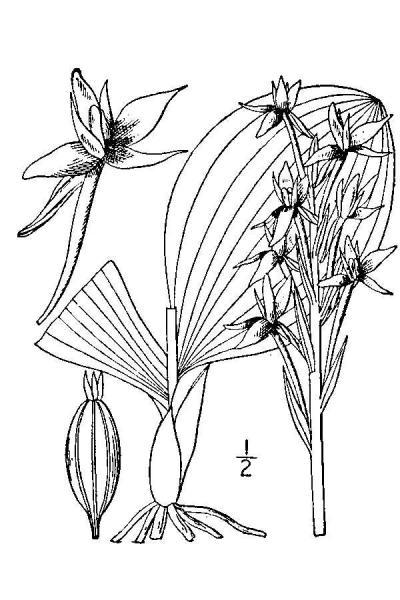 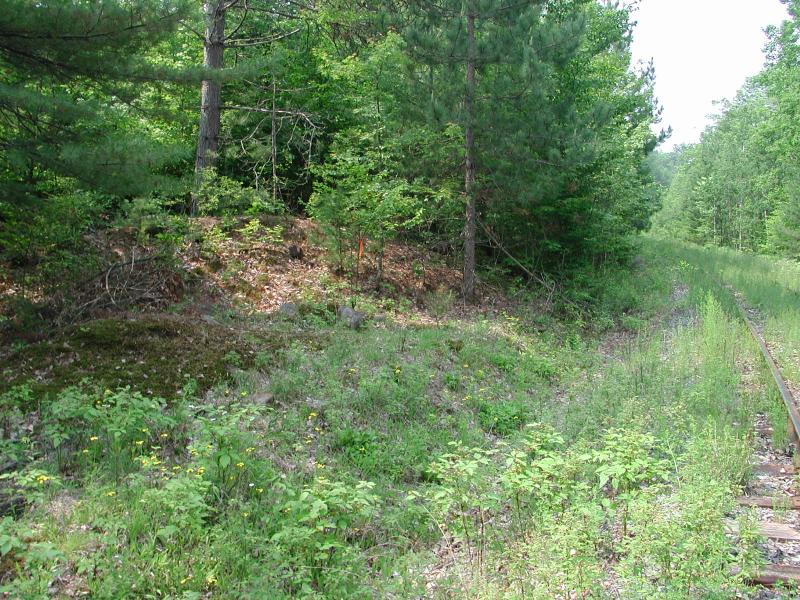 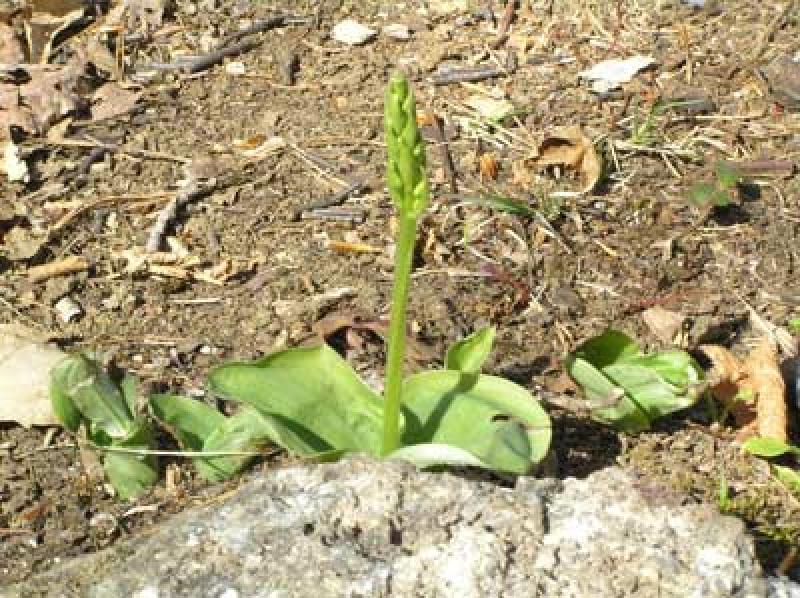 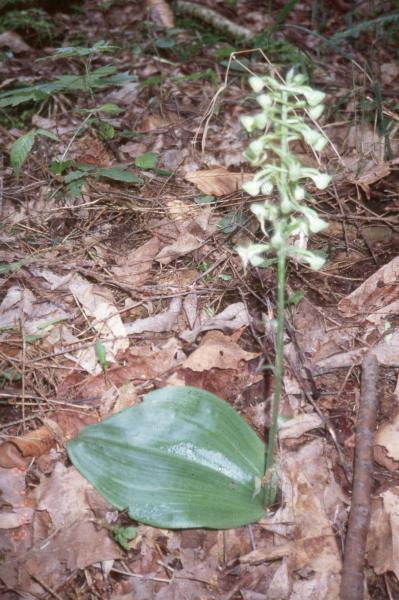