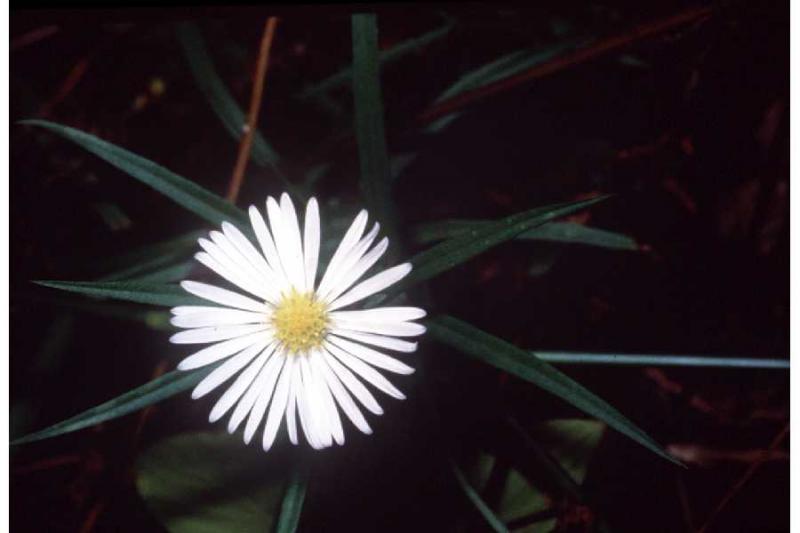 The difficulty of exploring the wet, unstable, and often shrubby bog habitat of this aster prevents many people from seeing it. Even when the habitat is surveyed this aster's narrow stems and leaves are often overlooked unless it is flowering.

There are 15 known populations and equally as many historical populations. More surveys are needed at these historical locations. This aster has a broad distribution across the state, but a rather narrow habitat requirement (bogs and fens). It is unclear if this is truly a rare plant, or if it is often overlooked.

There is a stable population within its range in New York. Five of the original 23 historical records have been rediscovered and nine new occurrences have been found since 1989.

There are as many current populations as have been known in the past so there does not seem to be a decline over the long term. Populations should continue to remain steady because much of its habitat is protected or under low threat.

Some development is taking place near a couple of sites where it occurs but there appears to be no direct threat to the wetlands.

Provide a large buffer to the wetlands where it occurs to protect the water quality and preserve the hydrology of the wetlands.

There are no research needs to report at this time.

This aster has a specific habitat requirement, but its general distribution is throughout New York State. One may encounter this aster in any bog or fen habitat. It is unclear if its rarity status is due to a limited number of populations, or if it is simply overlooked.

Northern bog aster grows from very slender underground runners less than 1/16" thick. The very slender stems, about 1/8" thick, grow from 6 inches to 3 feet tall and are hairless in the lower half but have lines of hairs in the upper half. The stem leaves are long and narrow with a long pointed tip and a base that is rounded to slightly clasping the stem. The rough margins are inrolled and may have a few scattered teeth but usually have no teeth at all. The main vein on the underside of the leaf is sometimes hairy. The lower leaves have often withered and fallen off by the time the plant flowers. There are up to 20 branches at the top of the plant with one flower head at the end of each branch. Small plants usually only have one flower at the top. The small leaf bracts around the bottom of the flower head are overlapping and held tight to the head. There are 20-30 white to pale rose or bluish ray flowers, 1/2 to 3/4" in length, around a yellow disk which turns purplish-brown with age. The flattened fruits have one rib on each side and are sparsely hairy.

This aster has slender, solitary stems arising from nearly filiform and stoloniferous elongate rhizomes that are 0.8-2 mm thick. The leaves are very narrow (usually less than 1 cm wide), linear or nearly so, 5-15 cm long, and very gradually taper to a slender tip. The leaf margin is entire (although often rolled along the edge), but the margin may have a harsh scabrous feeling. The lower surface of the leaf has clearly marked reticulation. The involucres are 5-8 mm high. There are usually 1-12 (20) flowering heads with 20-50 ray flowers each, the color ranging from white to pale blue or lavender. The phyllaries are in 3-5 series, the outer much shorter, linear-attenuate, thin and flexible, 0.5-1 mm wide, and with a slender green midrib.

This aster is best identified when in flower, although those very familiar with this plant may be able to identify it vegetatively. To verify the identification, a voucher specimen of the entire plant should be collected. This voucher should include the stem with roots and flowers or fruits.

This aster may be flowering between mid-July through early October, although most plants have finished blooming by early September. Since this plant is likely overlooked, surveys should be conducted during the peak blooming period (late July through August).

The time of year you would expect to find Northern Bog Aster vegetative, flowering, and fruiting in New York.

Information for this guide was last updated on: January 22, 2009