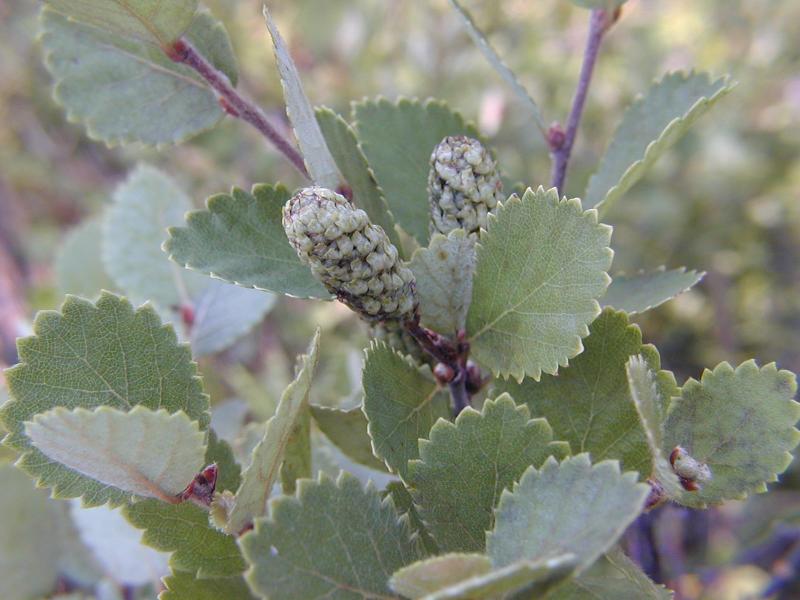 Swamp birch is the only shrubby birch in New York, hence its species name meaning small or dwarf. Its bark does not shred or peel. Native Americans would inhale the smoke from burning catkins to improve respiration.

As of 2004, there are at least nine known populations, including six excellent quality populations with hundreds of plants in high-quality to pristine habitat settings. This shrub is near its southern limit in New York, but in the appropriate habitat (bogs and shrub fens) it can do quite well. These sites are often well-protected, both ecologically and legally.

While overall habitat for this plant is limited, where found the populations have been stable for a number of years. There is no reason to suspect any changes in populations in the next 10-20 years.

This shrub has always had relative few populations in New York. These populations often have many stems that are long-lived. The long-term trend has remained stable and should continue to remain stable long into the future.

Most of these populations are in isolated wetlands with few or no threats. Hypothetically, hydrological regime changes that result in changes to a peatland would undoubtedly impact this rare shrub. These wetlands are typically protected under various wetland regulations, so the threat to the immediate populations is low. Phragmites may threaten recruitment at one site, but overall the threats to this plant statewide are very low.

There are no management requirements necessary for this plant.

In wetlands where Phragmites is present, a monitoring and research program should be established to determine the rate of spread, resulting hydrology changes, and bog birch seedling recruitment.

A northern species that has scattered populations within the St. Lawrence River Valley, northern Adirondacks, and the eastern Hudson Valley.

This is an erect woody shrub up to 2-3 meters tall, usually growing in colonies. The small rounded leaves are pale green to whitish underneath with large teeth on the edges. There are male and female birch catkins along the upper half of the branches.

A shrub to 2 meters tall (rarely as high as 3.5 meters). The young branchlets, with varying degrees of pubescence, are usually glandless but occasionally with scattered glandular dots. The leaves are submembranaceous, pale green to whitish beneath. The pistillate scales are 3-lobed, the middle lobe narrow and much longer than the lateral lobes. The wings of the fruit are barely as wide as the nutlet. In New York, this is a plant of calcareous wetlands and not alpine areas.

Ideally, one would identify this from a plant with leaves and fruits. At a minimum, you need to have leaves and young branchlets, along with a good habitat and location description, to allow for proper identification.

Flowers first appear by late May to early June and new fruits may begin forming shortly after. This fruits usually persist through winter, but many remnant fruits may even persist for a few years. Surveys for this plant should occur between mid-April to mid-October.

The time of year you would expect to find Swamp Birch vegetative, flowering, and fruiting in New York. 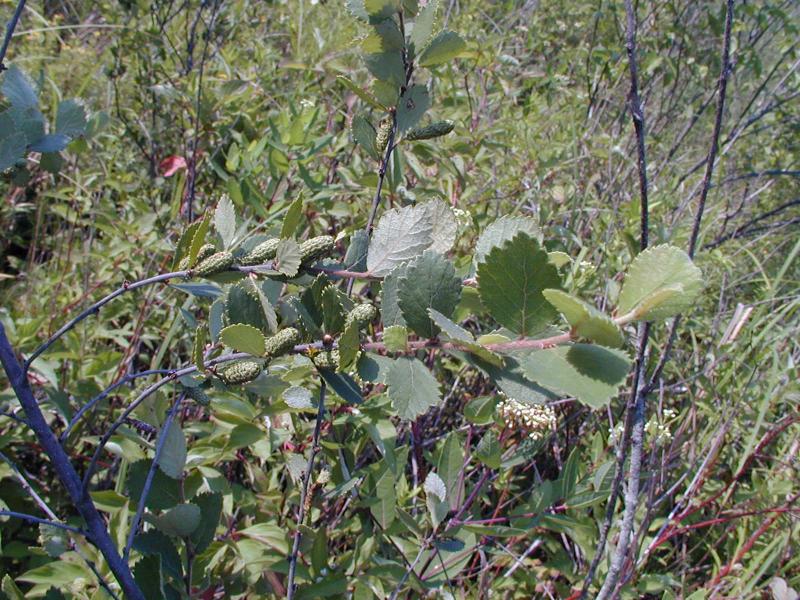 The classification of the dwarf birches has not yet been satisfactorily completed. The group is highly variable with two or three variants often growing together. The more alpine plants (Betula nana) are diploid (2n=28) while the less alpine plants (Betula pumila) are tetraploid (2n=56). The NY Natural Heritage Program is following the nomenclature of Mitchell and Tucker (1997) until such time when a clearer taxonomic understanding is complete.