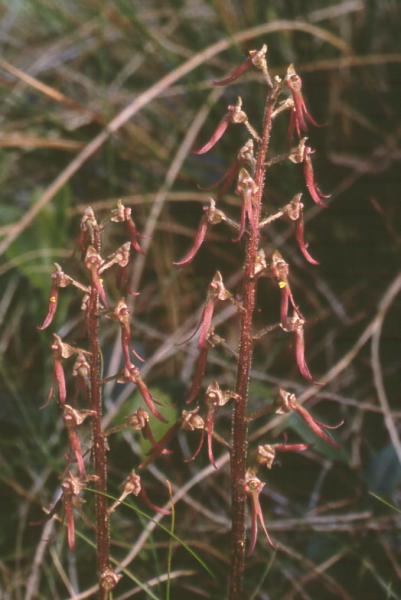 There are four species of Listera in New York and all of them are rare except Listera cordata, the heartleaf twayblade. These orchids are often very hard to see and great care must be taken when searching for them to avoid trampling. The small aboveground stem may not appear every year and when it does it only lasts for a few weeks. The genus name is dedicated to Martin Lister, 1638-1711, a famous English naturalist.

There are 10 known populations but half of these are relatively small. One large site contains approximately 2000 plants. There are roughly 20 historical populations that should be surveyed. There are undoubtedly more populations still to find.

A few populations have disappeared, despite repeated efforts to relocate these. However, a few new populations have been located. These new populations were likely present at these sites for many years, but infrequent surveys failed to locate them. Overall, there has probably been a slight decline in the total number of plants over the past 100 years, but with greater protection to wetlands these declines have likely stabilized.

As bogs, fens, and other wetlands were converted to muck farms or otherwise drained, populations were undoubtedly lost. These threats are minimal today. The number of populations that may have been lost after European settlement is impossible to assess, but speculation leads to the belief that there was at least a slight to moderate decline.

Today there are few threats that impact this species. Run-off may have some impact, but this is not well studied. Much of the habitat where this plant might be found is either protected on public land or subject to wetland protection laws.

The orchid has a split distribution within New York. Some of the larger populations are located along the Coastal Plain of Long Island, but populations have been reported over a widely scattered area that ranges from the Adirondacks into central and western New York. New York is near this orchid's northern limit.

This orchid is found in scattered locations of southern Quebec, southern Ontario, northern Vermont, New York, northern Pennsylvania, and New Jersey. It is also found more commonly in the southeastern US along the Coastal Plain from Virginia to Texas. Since this orchid is easily overlooked, there is a chance that the range is even broader than this.

Southern twayblade is a small and difficult to find orchid rarely over six inches high. It has twinned or a single pair of stiff leaves that occur in the middle of the stem. The leaves are spoon-shaped and are rich blue-green in color. Up to 25 flowers are distributed along the upper part of the stem, they are reddish-purple to pale green. Each flower has a narrow, two-pronged lip that may reach 10 mm in length. The flower stalks are shorter than the flowers and are covered with small glands.

This small orchid is 10-30 cm tall. The ovate leaves are 1-3.5 cm long. The rachis (main axil of inflorescence) and pedicel are glandular. There may be up to 25 flowers per inflorescence, with the flower appearing greenish-purple to dull red. The lip is 6-10 mm long, deeply cleft into linear lobes that point outward, with a small tooth at the sinus, and an inversely T-shaped fold at the base. The lip is four times as long as the lateral petals. The column is 1-1.5 mm long.

Listera cordata has a rachis and petioles that are glabrous with a lip that is 3-5 mm long and with two projecting lateral teeth near the base. The lip of Listera cordata is twice as long as the lateral petals. Our other Listera species have an uncleft lip with rounded lobes and a column that is more than 1.5 mm long.

This plant flowers in spring, with peak flowering usually in the first two weeks of June. In the northern part of the state, flowering plants may be present until the end of July while along the Coastal Plain they begin to fade by late June. Even when flowering, this small orchid can be difficult to locate. Surveys should be conducted in the first few weeks of June or even late May on Long Island.

The time of year you would expect to find Southern Twayblade flowering and fruiting in New York.