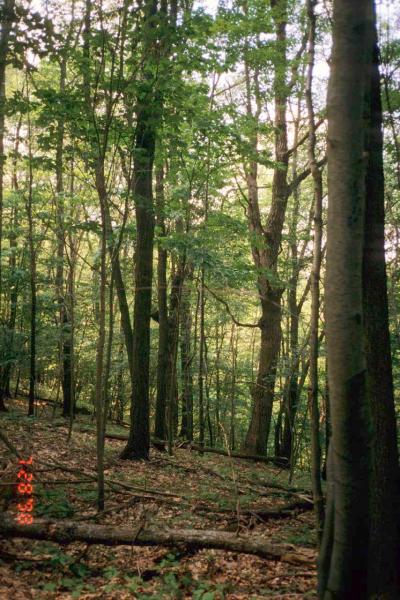 American chestnut was a common canopy species in Allegheny Oak Forest prior to the chestnut blight. This blight is caused by a fungal infection introduced from Asia in the late 1800's. Its spread has eliminated American Chestnut from the canopy of eastern North American forests. The species persists as sapling sprouts from the tree bases that fall prey to the fungus before the tree can mature and reproduce, beginning the resprout cycle over and over again.

There are currently fewer than ten sites known in New York with an estimate of several hundred to a couple thousand acres statewide. A few documented occurrences have good viability and several are protected on public land or private conservation land. This community has a limited statewide distribution and includes a few large, high quality examples. The current trend of this community is probably stable for occurences on public land, or declining slightly elsewhere due to moderate threats related to development pressure and unsustainable logging.

The number of and acreage of Allegheny oak forests in New York have been relatively stable in recent decades.

The number and acreage of Allegheny oak forests in New York have probably declined substantially from historical numbers likely correlated with the onset of agricultural and other development.

Threats to forests in general include changes in land use (e.g., clearing for development), forest fragmentation (e.g., roads), and invasive species (e.g., insects, diseases, and plants). Other threats may include over-browsing by deer, fire suppression, recreational overuse and air pollution (e.g., ozone and acidic deposition). When occurring in expansive forests, the largest threat to the integrity of Allegheny oak forests are activities that fragment the forest landscape into smaller pieces. These activities, such as road building and other development, restrict the movement of species and seeds throughout the entire forest, an effect that often results in loss of those species that require larger blocks of habitat (e.g., black bear, bobcat, certain bird species). Additionally, fragmented forests provide decreased benefits to neighboring societies from services these societies often substantially depend on (e.g., clean water, mitigation of floods and droughts, pollination in agricultural fields, and pest control) (Daily et al. 1997). Development of roads, pipelines, and trails across these oak forests could increase invasives and disturbance of forest interior species. Pesticide control of oak leafshredder (Croesia semipurpurans) which could threaten the community by impacting populations of non-target lepidopterans and possibly other forest insects. Allegheny oak forests may be threatened by the non-native spongy moth (Lymantria dispar). The spongy moth is known to feed on the foliage of hundreds of species of plants in North America but its most common hosts are oaks and aspen. Spongy moth populations are typically eruptive in North America; in any forest stand densities may fluctuate from near 1 egg mass per ha to over 1,000 per ha. When densities reach very high levels, trees may become completely defoliated. Several successive years of defoliation, along with contributions by other biotic and abiotic stress factors, may ultimately result in tree mortality (Liebold 2003, McManus et al. 1980).

Management should focus on activities that help maintain and regenerate the species characteristic of this community. High deer densities have been shown to have negative effects on forest understories (Miller et al. 1992, Augustine & French 1998, Knight 2003). Management efforts should strive to ensure that regenerating trees, shrubs and understory herbaceous species are not so heavily browsed that they cannot reproduce or reach the upper shrub layer and canopy. Avoid cutting old growth and high quality examples. In areas that are under active forestry, where possible encourage uneven-age methods and extended rotations.

Strive to minimize fragmentation of large forest blocks by maintaining connectivity with nearby forest patches via the retention of undisturbed natural corridors, preferably supporting forested habitats. Any development should be concentrated on forest edges, avoiding the extension of roads and road corridors into the forest. If roads must be built, minimize the width of roads and road corridors extending into forests, and designing cluster developments that minimize the spatial extent of the development. Development projects with the least impact on large forests and all the plants and animals living within these forests are those built on brownfields or other previously developed land. These projects have the added benefit of matching sustainable development practices (for example, see: The President's Council on Sustainable Development 1999 final report, US Green Building Council's Leadership in Energy and Environmental Design certification process at http://www.usgbc.org/).

Inventory any remaining large and/or old-growth examples. Continue searching for large sites in good condition (A- to AB-ranked).

In New York, Allegheny oak forests are concentrated in the unglaciated portion of the High Appalachian Plateau in Cattaraugus and Allegany counties but also occurs in Steuben county. New York is at the northern extreme of its range which extends south within the Appalachian region to approximately North Carolina and Tennessee.

Allegheny oak forests are a narrowly defined hardwood forest community distinguished by a more diverse canopy and a richer ground flora than other mid to high elevation oak forest communities. In New York, these mixed oak forests are concentrated in the unglaciated portions of the Allegheny Plateau, where they are characteristic of well-drained rounded ridgetops and upper southeast to southwest-facing slopes with elevations between approximately 1300 to 2300 feet above sea-level. Scattered examples also occur on high elevation, glaciated areas in the Allegheny Plateau.

Known examples of this community have been found at elevations between 1,300 feet and 2,300 feet.

During July, two species of lowbush blueberry in the understory of this community bear fruit. In autumn, the foliage of the hardwood canopy species and the understory shrubs turn rich colors providing attractive scenery. 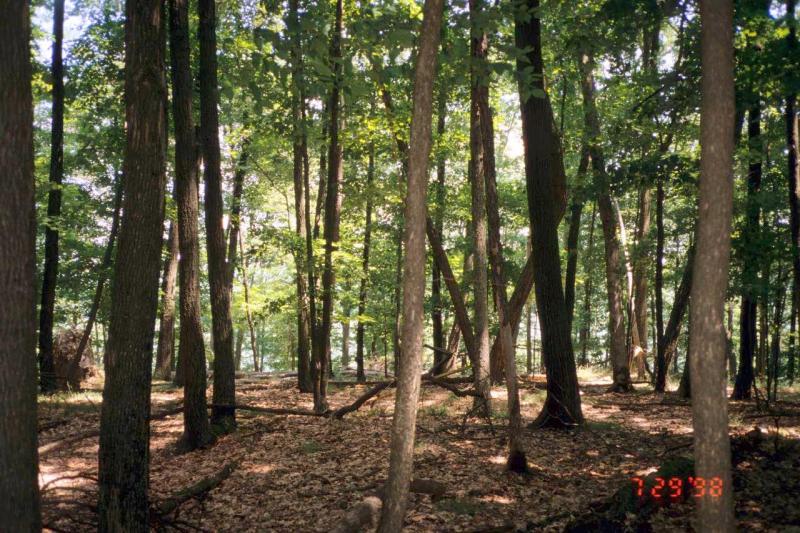 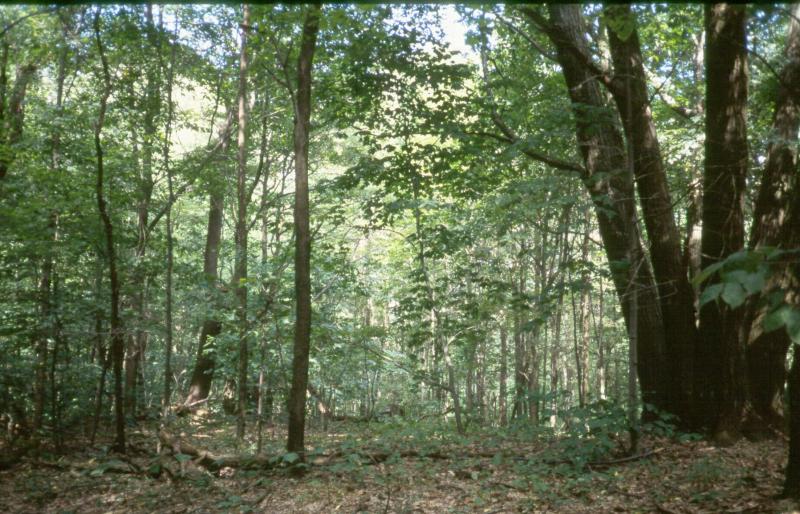 This figure helps visualize the structure and "look" or "feel" of a typical Allegheny Oak Forest. Each bar represents the amount of "coverage" for all the species growing at that height. Because layers overlap (shrubs may grow under trees, for example), the shaded regions can add up to more than 100%.