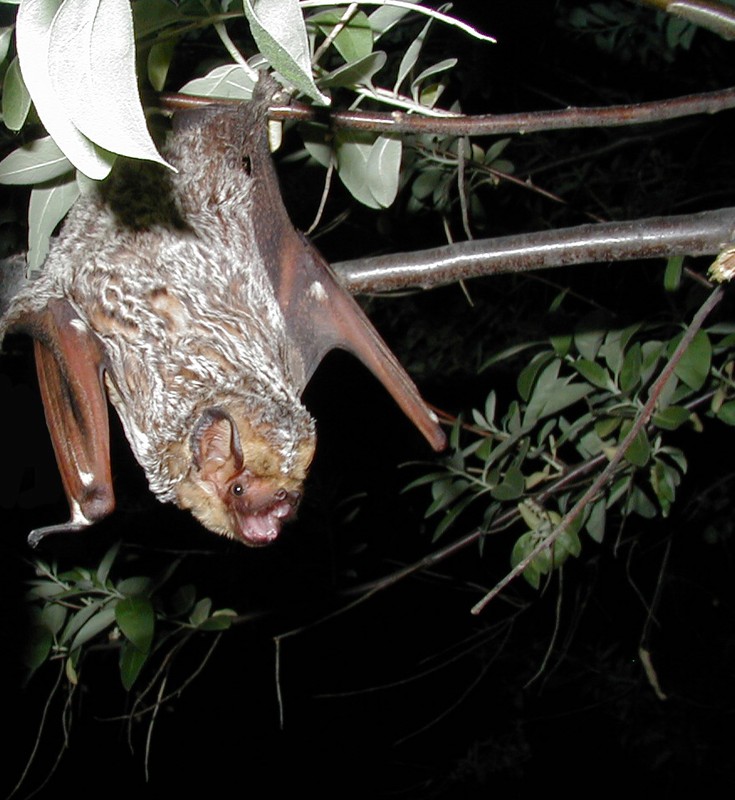 Distributions of hoary bats appear to be biased by gender in North America during the summer, with females more common in the eastern part of North America and males in the mountainous regions of the west.

Hoary bats are considered widespread in the state during the summer, migrate out of the state for the winter, and travel through the state during migration. The population trends of hoary bats in New York are unknown and this information is needed to accurately assess the status of this species in the state. Statewide acoustic surveys conducted by NYSDEC provide evidence of stability in the statewide distribution over the short-term.

The short-term trends in distribution appear to be stable from 2009-2013 (NYSDEC unpub. data) and the population trends are unknown.

The long-term trends of this species in New York are unknown.

Much remains unknown about the habitat requirements and population trends of hoary bats in New York and this information is needed to accurately assess threats to the species in the state. Hoary bats are killed during collisions with wind turbines during the late-summer/early-fall migration period and it is not yet known whether this is a threat to the persistence of healthy populations in New York.

Hoary bats are "migratory tree bats" that migrate rather than congregate in caves over the winter, and are not known to be affected by white-nose syndrome which has devastated cave bat populations in eastern North America. There has been a relatively high rate (30% of submitted carcasses) of rabies in hoary bats populations in some regions, such as the Midwest (Whitaker and Douglas 2006); however, the prevalence may be lower (10% of submitted carcasses) in New York (Childs et al. 1994).
Hoary bats are killed when they collide with wind turbines in New York, particularly during fall migration. It is unknown whether the numbers of bats killed at turbines during migration is high enough to impact population numbers. One study reported that hoary bats made up to 46% of bat carcasses found at wind facilities in the eastern U.S (Arnett et al. 2008).
Bats may be particularly sensitive to environmental toxins including those found in herbicides and pesticides. They are highly susceptible to DDT residue and this chemical was widely used as a pesticide to control bat infestations in houses in the 1940s (U.S. Geological Survey 2013). It was also widely used (including aerial application) to control mosquitoes and agricultural pests in the 1940s and 50s. It was banned with few exceptions in 1972. Since DDT is highly persistent, with a soil half-life of 2-15 years and an aquatic half-life of about 150 years (NPIC 1999), it can pose a threat to bats when there is exposure to trace residues remaining in the environment (USGS 2013) or through bioaccumulation when quantities of contaminated insect prey are consumed. Extensive applications of insecticides and some bio control methods, such as Btk, could also pose an indirect risk to hoary bats by reducing availability of insect prey.

Much remains unknown about the specific habitat requirements, reproductive behavior, and demographics of this species. The population trends, distribution, and local abundance also remain unknown and this information is needed to assess the extent of current threats to hoary bats in New York. Research identifying migratory patterns and pathways is needed, including studies of east-west movements (Cryan 2003).

Specific habitat requirements have not been studied for hoary bats in New York and few studies exist of their roosting and foraging habitats in eastern North America.

Hoary bats roost in deciduous and coniferous trees among foliage and may use a variety of tree species (Saunders 1988). Roost heights of 3-5 m above the ground have been reported (Shump and Shump 1982; Saunders 1988); however, heights averaging around 16 m have also been reported (Perry and Thill 2007). In Arkansas, roosts were typically in tall and large (>21cm dbh) oaks and pines within mature (>50 yrs old) mixed stands with 80% canopy cover (Perry and Thill 2007). The only radio-tracking study known from the northeastern U.S. documented roosts and foraging habitat of a single juvenile in New Hampshire (Veilleux et al. 2009). It was found to roost in hemlocks within a larger hemlock stand and its home range encompassed mostly mixed and coniferous forest, and included some open habitats and wetlands as well (Veilleux et al. 2009).

Although roosts may be typically located in forests or wooded areas, hoary bats forage in open areas and avoid dense vegetation or cluttered habitats for this activity (Owen et al. 2004; Brooks and Ford 2005). They typically forage in forest openings, over water, or around trees (Saunders 1988). Hoary bats have been reported to forage over clearcut harvests (Owen et al. 2004) and over reservoirs and large ponds (Brooks and Ford 2005).

Hoary bats may be found throughout New York. A model of the distribution of hoary bats in New York predicts them with highest probabilities in the Adirondacks, Tug Hill plateau, Allegheny plateau, and the greater Sodus Bay area (NYNHP unpub. data).

Hoary bats are the most widespread bat species found in the U.S. and the Hawaiian subspecies, Lasiurus cinereus semotus, is notably the only terrestrial mammal native to Hawaii. They are found throughout most of North America, from Canada through Mexico to Guatemala; also western South America (Colombia and Venezuela to central Chile, Uruguay, and central Argentina), Hawaii, Galapagos, Bermuda, and (accidently) other islands (NatureServe 2013). This species is rare or absent in most of the southeastern United States and in deserts of the Southwest (NatureServe 2013). Wintering areas for northern breeders include the southeastern United States, southern California, and northern Mexico (NatureServe 2013). There does not appear to be evidence of widespread movements between North America and South America (Cryan 2003). There is some evidence that summer distributions may be skewed or segregated by gender with females being more common in the eastern part of North America and males in the mountainous western regions (Cryan 2003).

Hoary bats are large weighing 20-45g (Shump and Shump 1982; Saunders 1988). Their pelage is yellowish brown to dark brown, and grey and tipped in light grey. The throat is yellowish in color and the longer neck hair forms a ruff (Saunders 1988). They have short, rounded ears that are edged in black and their tragus, or fleshy protuberance in the ear, is short and broad. The interfemoral membrane, or membrane that stretches between their legs and is used in flight, is heavily furred. Females, on average, are slightly larger than males (Williams and Findley 1979).

The hoary bat may appear superficially similar to the silver-haired bat (Lasionycteris noctivagans); however, the hoary bat is much larger and lighter in color with grey-tipped yellowish-brown fur and a yellow throat. The silver-haired bat has pelage that is dark grey underneath and silver-tipped giving it a frosted appearance (Kunz 1982). They have a swift direct flight similar to red bats but are larger.

Hoary bats are typically solitary, but they may forage among other species (Saunders 1988). They are a migratory species, however migration routes are unclear (Cryan 2003). They may exhibit some seasonal movements between eastern and western North America and there does not appear to be strong evidence for extensive movements between North and South America (Cryan 2003).

Breeding behavior remains somewhat of a mystery. One hypothesis exists that they may congregate to breed during late-summer/ early-fall migration at large trees and structures (Cryan 2008). Breeding is known to occur during migration and may continue on the wintering grounds (Shump and Shump 1982; Saunders 1988; Cryan 2008). Two young are born in June or early July (Saunders 1988). Young may cling onto the mother by day but are left hanging on a twig or leaf while she forages at night (Barbour and Davis 1969; Shump and Shump 1982). Young are able to fly after about a month and are independent soon after (Saunders 1988).

Hoary bats exhibit a swift direct flight that is similar to red bats (Shump and Shump 1982; Saunders 1988). They typically emerge from roosts to forage between 1 to 5 hours after sunset and may emerge closer to sunset in early and late summer (Saunders 1988).

Hoary bats are moth (Lepidoptera) specialists. Ninety-eight percent of prey consumed was Lepidoptera in West Virginia, with lesser amounts of Hemiptera (Carter et al. 2003). Hoary bats may consume a more varied diet during migration. One study, during fall migration through Alberta, found that adult hoary bats preyed heavily on Lepidoptera (53%) but also on Hemiptera (41%); particularly water boatmen (Corixidae) (Reimer et al. 2010). While juvenile bats also preyed heavily on Lepidoptera with more variation in prey consumed. There are no known studies of the specific diet of hoary bats in New York.

The most reliable time to see a hoary bat is in the evening in June or July. They typically emerge from roosts later than many other species. They may be hard to distinguish in low-light conditions. See Behavior or identification Characteristics sections for distinguishing flight characteristics.

The time of year you would expect to find Hoary Bat present and reproducing in New York. 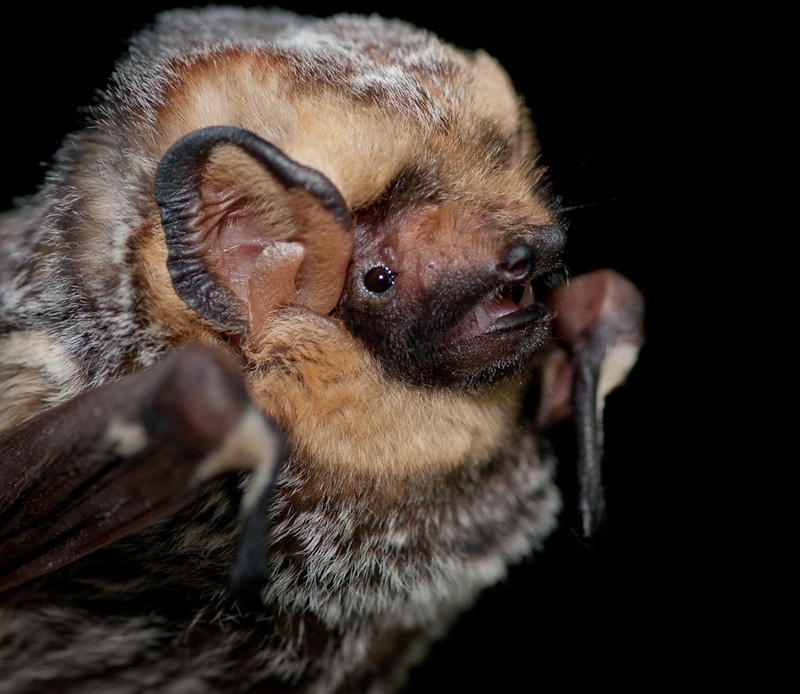