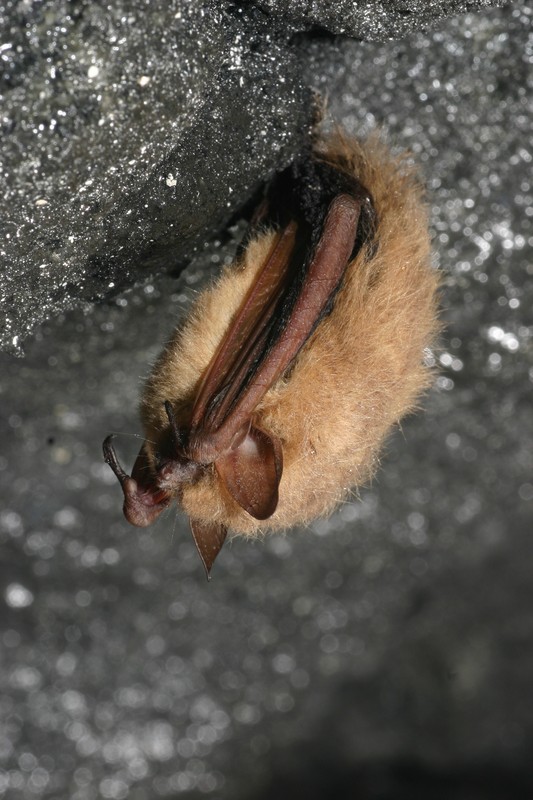 The tri-colored bat (Perimyotis subflavus) was formerly known as the eastern pipistrelle (Pipistrellus subflavus). It was first recommended for placement in a separate genus in 2003 (Hoofer and Van Den Bussche 2003).

Tri-colored bats were likely never common in New York. Although their northern range extends into Canada, New York is peripheral to the core of their range. The statewide population numbers have declined dramatically since the effects of WNS were first observed in 2006.

Tri-colored bat numbers are presumed to have been stable or increasing prior to the start of WNS in 2006 (C. Herzog pers. comm.).

Tri-colored bats use open woodlands and riparian forests. Populations in New York and the eastern U.S. have plummeted since White-nose Syndrome (WNS) was first reported in 2006.

By far the largest threat to tri-colored bats in New York is white-nose syndrome (WNS) which was first discovered among bats in a cave in Schoharie County, New York in 2006. White-nose syndrome is caused by a fungus Pseudogymnoascus destructans (previously Geomyces destructans) that is often visible on the bats muzzle and wings (Blehert et al. 2009). The fungus may invade hair follicles and cause lesions under the skin (Blehert et al. 2009). Bats wake from hibernation and consequently burn fat reserves that are needed to survive the winter and they become emaciated (Blehert et al. 2009). Extensive damage to their wing membranes and dehydration may also be contributing factors to mortality (U.S. Fish and Wildlife Service 2013).
Bats may be particularly sensitive to environmental toxins including those found in herbicides and pesticides. Although no studies have targeted tri-colored bats directly, elevated levels of persistent organic pollutants including PCBs, DDT, Chlordanes, and PBDEs have been found in a similar species, the little brown bat, in the Hudson River Valley in New York (Kannan et al. 2010). The levels found in the bats were only one to three times less than lethal concentrations reported from previous studies (Kannan et al. 2010). High toxin levels are expected in bats that obtain a high a composition of their diet from prey with an aquatic life stage. This may be a concern for tri-colored bats, as well, since caddisflies have been reported as an important food item in some regions (Carter et al. 2003; Feldhamer et al. 2009). Bats are highly susceptible to DDT residue, a chemical that was widely used as a pesticide to control bat infestations in houses in the 1940s (USGS 2013). DDT was widely used as an agricultural pesticide in the 1950s and 60s until its agricultural use was banned in 1972. Since DDT is highly persistent (soil half-life is 2-15 years, aquatic half-life is about 150 years) (NPIC 1999), it can pose a threat to bats when there is exposure to trace residues remaining in the environment (USGS 2013). Tri-colored bat populations were thought to have been impacted by heavy pesticide use in the mid-1950s (MA Natural Heritage Program 2012). Extensive applications of insecticides and some bio control methods, such as Btk could also pose an indirect risk to tri-colored bats by reducing availability of prey.
If proper precautions are not used, cavers and researchers entering hibernacula may cause disturbance that rouses bat colonies or can transport the fungus that causes WNS on their clothing (NatureServe 2013). Other potential threats may include climate change, commercial cave development, flooding and hibernacula collapse; habitat loss and fragmentation from development, hydraulic fracturing, and the construction of new wind facilities; and direct mortality from wind facilities (U.S. Fish and Wildlife Service 2013).

Gating mines and caves can prevent human entry while allowing the bats unobstructed access. Following proper specifications and monitoring bat populations before and after gate installation are important, however, as gating can affect the airflow and temperature in the cave, making areas of the cave uninhabitable for certain species (U.S. Fish and Wildlife Service 2013). Buildup of debris at cave entrance gates can also have the same effect (U.S. Fish and Wildlife Service 2013).

Research is needed to document summer roost locations and habitat in New York and to determine the extent of local populations. Research is also needed to identify regional differences in the characteristics of quality habitat and to identify areas of the state with the highest local abundances during summer. Ongoing winter hibernacula surveys are needed to monitor trends of the remaining populations.

Conservation needs have not been determined for this species in New York. The extent of the current distribution of tri-colored bats in the state, as well as habitat requirements need to be determined prior to assessing specific management and conservation needs.

Tri-colored bats over-winter in humid areas deep within caves and mines with a constant temperature of around 52-55F (Griffin 1936; Godin 1977). A study in Arkansas found tri-colored bats selected larger caves with a wide range of temperatures within a season, but little variability among temperature between seasons (Briggler and Prather 2003). Surveys of hibernacula in New York conducted by the New York State Department of Environmental Conservation found tri-colored bats segregated from other species in warmer areas of the cave with high humidity.

Wooded riparian areas are likely an important foraging habitat for this species during the summer. One study in coastal South Carolina, found that tri-colored bats were more frequently found in riparian areas than in upland sites and especially, riparian areas that were wooded or highly vegetated (Menzel et al. 2005). They may also forage in woods or along waterways or forest edges (Fujita and Kunz 1984). Although tri-colored bats are typically considered a clutter-adapted species capable of foraging within forested areas, they also forage over early successional and open habitats (Loeb and O'Keefe 2006).

Tri-colored bats may roost in habitats including open woods near water and they may select roosts in buildings, crevices of cliffs and rocks, or in or below the canopy of live or recently dead trees that retain some dead or live leaves (Veilleux et al. 2003; Carter and Menzel 2006; Perry and Thill 2007). They are occasionally reported from caves during the summer (Godin 1977), and have been known to form maternity colonies in barns (Fujita and Kunz 1984), in clusters of dead leaves in oaks or pines (Perry and Thill 2007), and in Nova Scotia in lichen (Poissant et al. 2010). Perry et al. (2008) found that tri-colored bats tended to select roosts that were away from roads, in unharvested woods with high habitat heterogeneity, or in the unharvested riparian buffer of a partially harvested stand. Some habitat characteristics may vary regionally. Perry and Thill (2007) found tri-colored bats in mature forest stands with a hardwood component and a complex vertical structure and dense midstory. However, Yates and Muzika (2006) found that tri-colored bats favored open habitats with less dense mid-story vegetation and a dense understory.

Prior to the start of WNS tri-colored bats were recorded in winter hibernacula in all regions of the state where mines and caves have been surveyed. They were more common (>10 individuals) in hibernacula in southern and western New York. The remaining distribution of tri-colored bats in New York is not known. Their statewide range may have contracted since the start of WNS.

Tri-colored bats are found in eastern North America along the east coast as far south as Georgia and north into Nova Scotia and southern Quebec and Ontario. Their western range extent includes eastern Minnesota in the north and Texas to the northeast corner of Mexico in the south.

Tri-colored bats are nocturnal with periods of heightened activity at pre-dawn and dusk. They may range 5 miles from a roost to forage (MA Natural Heritage Program 2012).

Tri-colored bats are short-distance migrants traveling between winter hibernacula and summer habitat. The farthest known record was 52.8 km (Griffin 1940), although migration distances from hibernacula have not been extensively researched. Tri-colored bats may enter the hibernacula earlier in the fall and leave later in the spring compared to other species (Fujita and Kunz 1984).

Tri-colored bats breed in the fall and may breed again in the spring, coinciding with ovulation (Fujita and Kunz 1984). They swarm and mate near the cave entrance. Females store sperm over the winter until ovulation occurs in the spring, which coincides with emergence from winter hibernacula. Females generally give birth to two young.

Tri-colored bats often obtain insect prey by catching them in their tail and wing membranes. They may forage at varying heights, including within the canopy or above or below it (Menzel et al. 2005). They may forage in habitats such as woods, along waterways, or forest edges (Fujita and Kunz 1984).

Tri-colored bats are usually solitary but may be found roosting in small colonies; especially females which form maternity colonies in summer.

Tri-colored bats may best be seen shortly after sunset or in the early morning before dawn in the late spring and summer. They are one of the first bats to emerge to forage in the evenings (Hamilton 1943). They have a slow, erratic flight pattern that may be distinguished from other species by an experienced observer.

The time of year you would expect to find Tri-colored Bat present, active, and reproducing in New York.