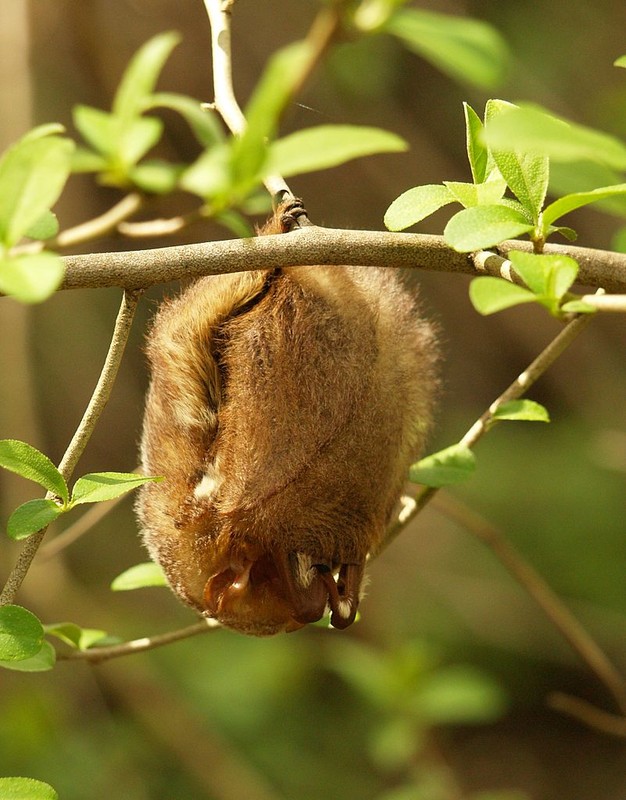 Eastern red bats may live close to moderately populated areas and are known to forage for insects around street lights.

Eastern red bats are not rare in the state and so are not tracked by The New York Natural Heritage Program. They occur in the state in the summer, migrate out of the state in the winter, and travel through during migration. They are regularly encountered statewide during acoustic surveys conducted by NYSDEC and this monitoring documented stability in their distribution over the short-term.  Population trends of eastern red bats in New York are unknown and this information is needed to accurately assess threats to the species in the state. They are not as common in New York as in states farther south, and in some parts of their range such as in Michigan (Winhold et al. 2008), there is evidence that they could be declining.

The short-term trends in New York distribution appear to be stable from 2009-2013 (NYSDEC unpub. data) and the populations trends are unknown.

The long-term trends are not known for New York. There is evidence that this species could be declining in at least parts of its range (Winhold et al. 2008).

Eastern red bats are regularly encountered in New York and may occur in a variety of habitats and sometimes in proximity to moderate human densities. They are killed during collisions with wind turbines during the late-summer/early-fall migration period and it is not yet known whether this is a threat to the persistence of healthy populations in New York.

Red bats are migratory tree bats that migrate rather than congregate in caves over the winter, and are not known to be affected by white-nose syndrome which has devastated cave bat populations in eastern North America. The incidence of rabies in eastern red bats is moderate to high and may be of concern in some regions. Studies report the incidence of rabies among submitted carcasses as 11% in Indiana (Whitaker and Douglas 2006) and 5% in New York (Childs et al. 1994).
Red bats are killed when they collide with wind turbines in New York, particularly during fall migration. It is unknown whether the numbers of bats killed at turbines during migration is high enough to impact population numbers in the state. One study reported that red bats made up to 61% of bat carcasses found at wind facilities in the eastern U.S (Arnett et al. 2008).
Bats may be particularly sensitive to environmental toxins including those found in herbicides and pesticides. They are highly susceptible to DDT residue and this chemical was widely used as a pesticide to control bat infestations in houses in the 1940s (U.S. Geological Survey 2013). It was also widely used (including aerial application) to control mosquitoes and agricultural pests in the 1940s and 50s. It was banned with few exceptions in 1972. Since DDT is highly persistent, with a soil half-life of 2-15 years and an aquatic half-life of about 150 years (NPIC 1999), it can pose a threat to bats when there is exposure to trace residues remaining in the environment (USGS 2013) or through bioaccumulation when quantities of contaminated insect prey are consumed. Extensive applications of insecticides and some bio control methods, such as Btk could also pose an indirect risk to red bats by reducing availability of insect prey.

Research indicates that raising cut-in speeds (i.e., wind speed at which turbines first start rotating and generating electrical power) of wind turbines during peak migration times may limit the number of migratory tree bats killed (Baerwald et al. 2009; Arnett et al. 2011). Eastern red bats may roost in the remaining large trees in urban and agricultural areas and this can be important habitat to retain for them (Mager and Nelson 2001).

Research is needed to document specific roosting habitats in New York, and to determine population trends and regions of the state with the highest local abundances.

Eastern red bats most often roost among tree foliage or sometimes in shrubs, leaf litter, dense grass or under house shingles (Shump and Shump 1982; Mager and Nelson 2001). They may select roosting locations that are 1-12 m above the ground and shaded from above but open below (Saunders 1988). In urban or rural areas where woods have been cleared, large remaining trees may provide important roosting habitat (Mager and Nelson 2001). They use a variety of deciduous tree species for roosting; common ones in the Midwest include American elm (Ulmus americana), box elder (Acer negundo), sweetgum (Liquidambar syraciflua), and oaks (Quercus spp.) (Constantine 1966; Mager and Nelson 2001). On Long Island one was reported roosting on exposed roots on a beach cliff. Day roosts are frequently located in edge habitat along streams, open fields, near canopy gaps, or near urban areas (Constantine 1966; Mumford 1973; Shump and Shump 1982; Hutchinson and Lacki 2000), and are typically located within foraging areas (Elmore et al. 2005).

The eastern red bat's summer range includes the central and eastern United States east of the Continental Divide, and southern Canada and northeastern Mexico (Baker et al. 1988; Cryan 2003; Reid 2006). There is evidence of skewed sex ratios in some regions but this appears to be at a local scale, unlike for hoary bats (L. cinereus) (Cryan 2003). The winter range of the eastern red bat is predominantly in the southeastern United States; however, they have been found farther north (Cryan 2003).

Eastern red bats have red pelage that may appear brick to rusty red or buffy orange and is dense and wooly (Saunders 1988). The hair of the back and chest are tipped in white and they have a white shoulder patch. They have long, pointed wings and a long tail (Shump and Shump 1982). The bald parts of the tail and wing membranes are brownish black. Males tend to be more brightly colored than females and females are larger than males. Adults weigh 7-15 g (Shump and Shump 1982; Saunders 1988).

Eastern red bats can be distinguished from other New York species by their red fur. In flight, they can be distinguished by the position of their tail, which is extended straight out from the body (Shump and Shump 1982). They have a swift direct flight similar to hoary bats but they are much smaller.

Adults and older juveniles may be easiest to identify.

Eastern red bats roost hanging upside down from one or both feet, and they often resemble a dead leaf hidden in tree foliage (Saunders 1988). Eastern red bats are solitary but may forage or migrate with other individuals (LaVal and LaVal 1979; Saunders 1988). Average home range sizes of 68 and 94 hectares have been reported (Elmore et al. 2005; Walters et al. 2007).

Pairs copulate while in the air and sometimes flutter to the ground (Saunders 1988). In some parts of their range, red bats swarm near cave entrances to mate, although they do not use the cave for winter shelters (Saunders 1988). Young are born in late June or July and there is some variation in the number of offspring produced ranging between 1 and 5, and averaging 2.3 (Hamilton and Stalling 1972; Mumford 1973; Shump and Shump 1982; Saunders 1988).

Red bats emerge from their roosts from 1-2 hours after sunset, which is later than for many species, but before hoary bats (Shump and Shump 1982). They exhibit a swift direct flight, although they may behave more erratically during foraging. They forage at multiple heights including high over forests and fields, and between the ground and canopy (Barbour and Davis 1969; Saunders 1988). They return to certain areas to forage nightly, typically within 300m of their day roosts (Saunders 1988). They are most active foraging during the few hours following sunset and before dawn (Shump and Shump 1982; Saunders 1988).

There is evidence to support the use of chemical signals to communicate in this species, such as the use of the same perch by different individuals in successive nights during migration (Saunders 1988). Eastern red bats are migratory and may typically move to southern states to overwinter where they probably hibernate in trees (Barbour and Davis 1969; Shump and Shump 1982).

A high percentage of the diet of the eastern red bat consists of beetles and moths with some regional differences in the variety of prey consumed. There are no known studies of diet in New York, however, there are several from the eastern United States. In South Carolina, eastern red bats consumed mostly beetles (Coleoptera) in early to mid summer but switched to a higher composition of moths (Lepidoptera) as beetle availability decreased in late summer (Carter et al. 2004). In West Virginia, eastern red bats preyed heavily on Lepidoptera which made up 47% of their diet followed by Coleoptera (25%), Tricoptera (10%), Homoptera (9%), and lesser amounts of Hemiptera, Diptera, and Hymenoptera (Carter et al. 2003). In southern Illinois, eastern red bats consumed primarily Lepidoptera (39%) followed by Homoptera (27%) and Coleoptera (23%), with lesser amounts of Diptera, Hemiptera, Hymenoptera, and Tricoptera (Feldhamer et al. 2009).

The best time to see eastern red bats in New York is in late May through July in the early evening.  See Identification Characteristics for tips on distinguishing this species in flight.

The time of year you would expect to find Eastern Red Bat present and reproducing in New York.