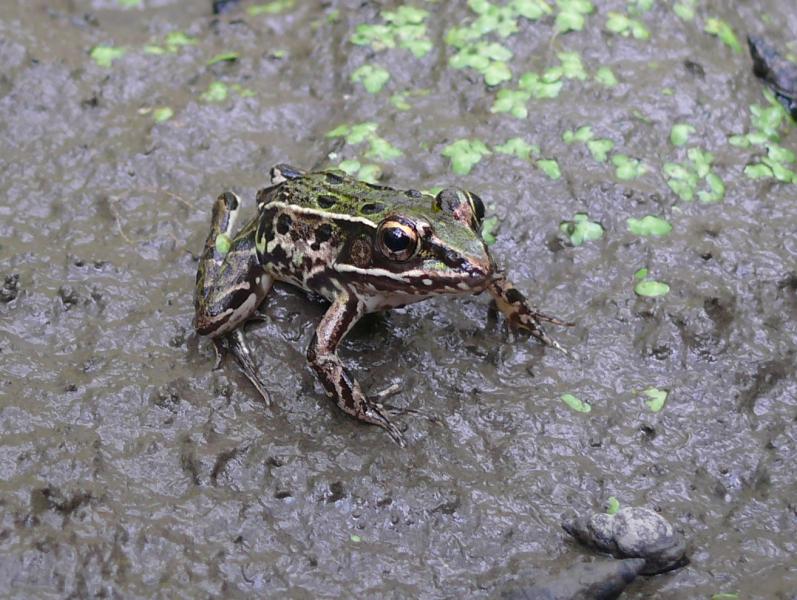 The Atlantic Coast Leopard Frog is only one of two newly described frog species from the United States in the last 30 years.

The Atlantic Coast leopard frog appears to have declined precipitously in New York, including vanishing from Long Island. A handful of populations remain in the lower Hudson Valley and on Staten Island.

Short-term trends are unknown. Despite considerable survey effort, leopard frogs have not been confirmed on Long Island since the mid-1990s, so major declines in that region are likely.

Over the long term, this species has been in precipitous decline in the state, having disappeared from much of New York City and the Hudson Valley and all of Long Island.

Loss and fragmentation of wetlands, the expansion of bullfrogs, and invasion of wetlands by the common reed Phragmites are potential threats. Studies specific to the Atlantic Coast leopard frog are needed, including studies to determine genetic connectivity among populations to ensure that the isolated nature of some populations has not led to inbreeding depression. Fragmentation has additional, more immediate direct effects on mobile individuals in the form of road mortality. Highways and other major roads bisect leopard frog habitat throughout the Northeast, and frogs are often killed when crossing them. In fact, many of our samples were obtained from road-killed frogs. High-volume or multi-lane roads may serve as permanent, impenetrable barriers to dispersal, which, along with road mortality, can have considerable impacts on anuran abundance.

Another point of concern for the Atlantic Coast leopard frog is the coastal proximity of many populations. Coastal populations of wetland organisms may be threatened by rising sea levels and increasing frequency and intensity of coastal storms, both of which may increase with climate change. Storms may cause saltwater overwash into freshwater habitats, and ongoing research (Feinberg et al., unpubl. data) is addressing the tolerance of Atlantic Coast leopard frogs to brackish conditions and persistence in coastal sites after major storm events. In Delaware, large calling choruses disappeared from freshwater impoundments along the Delaware Bay following storms that altered the coastline creating inlets that allowed for inflow of saltwater (J. White, pers. comm.). More inland (typically large-river riparian) populations may be less vulnerable to these changing coastal conditions, but also possibly less adapted to storm-related flooding.

Apart from the pine barrens treefrog (Hyla andersoni) and New Jersey chorus frog (Pseudacris kalmi), no eastern US anuran north of Florida has as small a range as the Atlantic Coast leopard frog A small range may make a species more susceptible to stochastic events, and for frogs, may exacerbate the impact of fungal pathogens like Batrachochytrium dendrobatidis (Bd). Bd has recently been documented in the Atlantic Coast leopard frog (J. Feinberg, unpublished data) as it has in the northern and southern leopard frogs and many other ranids.

For species such as leopard frogs that spend considerable time in the uplands, the landscape surrounding the aquatic breeding habitat may also be crucial to long-term persistence. Based on typical migration distances reported in the literature on other amphibian species, a terrestrial buffer around breeding habitat of several hundred meters is likely necessary to ensure suitable upland habitat, although in at least one highly urban setting the species appears to survive with little surrounding upland greenspace.

As with any newly described species, there is still much to learn about R. kauffeldi’s ecology and natural history. Descriptions of R. kauffeldi egg masses and tadpoles are lacking, and the ability to distinguish species based especially on tadpoles would be a boon to detailed natural history, ecological, and demographic studies. For example, adaptations of the various life stages to particular environmental conditions and stressors may help explain the geographic and ecological distributions of the species. Given the highly urban setting of many populations, the susceptibility to environmental contaminants of the various life stages, and potential impacts of noise on anuran communication, are of great interest. Research into possible competitive interactions may shed light on any niche separation given the overlap with R. sphenocephala and R. pipiens and the suggestion of hybridization in both the genetic and morphological data, and help explain observed declines.

In New York, leopard frogs occur primarily in open habitats, including grasslands, wet meadows, grassy edges, shallow wetlands, and clear, slow-moving ditches. They are rarely found fall from water although in summer they may use grassy areas adjacent to breeding habitat.

The Atlantic Coast leopard frog is known definitively from four locations on Staten Island, three in Orange County, and one in Putnam County. Historically, it occupied much of New York City and Long Island as well as many more locations in the lower Hudson Valley.

This species' global range has not been fully assessed but it appears to occupy a narrow stretch of the Atlantic coastal plain extending from northern North Carolina northward, up large river valleys in New York and Connecticut.

Leopard frogs are green or brown, usually with irregularly spaced rounded dark spots on the back and a few dark spots on the sides of the body. A continuous usually yellowish ridge extends along each side of the back. The head is pointed, and sometimes there is a light spot in the center of the eardrum. The hind toes are extensively webbed. Maximum size is around 5.1 inches (13 cm) snout-vent length. Breeding males have vocal sacs at the angles of the jaw; the sacs are spherical when inflated. The forelimbs of mature males are more massive than those of females, and the base of the thumb is larger in males than in females. The breeding call is a repeated single chuck combined with an occasional drawn-out snore. Larvae have faint to dark mottling on the body and tail, and the eyes are positioned on top of head, not at the margin of the head, when viewed from above. Maximum size of larvae is about 3 inches (7.6 cm) in total length. Egg masses are baseball sized when the jelly is fully expanded and contain roughly 1,000-1,500 eggs.

A brown to green frog with rounded spots, distinct dorsolateral lines, and an occasional white spot on the tympanum. The reticulum (upper thighs) is typically dark with light spots. The call is a single-pulsed "chuck" with an occasional rolling "snore."

As the tadpole and egg mass have yet to be described, the adult stage is the only stage in which this frog can be distinguished visually from similar species. The call of the adult is diagnostic.

Leopard frogs are primarily nocturnal. Males typically call between midnight and daybreak. They are very skittish and can make quick leaps into vegetation or water when they feel threatened. Egg masses of 3,000 to 5,000 eggs are often laid communally. Tadpoles hatch in 7-12 days and transform into adults in 2-3 months. Late-hatching eggs may overwinter as tadpoles. The frogs migrate between breeding pools and upland foraging areas. They hibernate in mucky bottoms of wetlands. (Gibbs et al. 2007)

The time of year you would expect to find Atlantic Coast Leopard Frog present, active, and reproducing in New York. 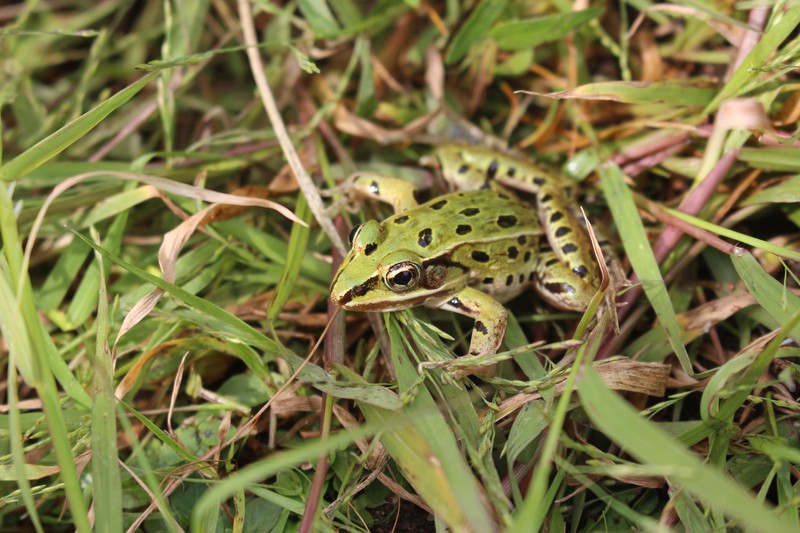 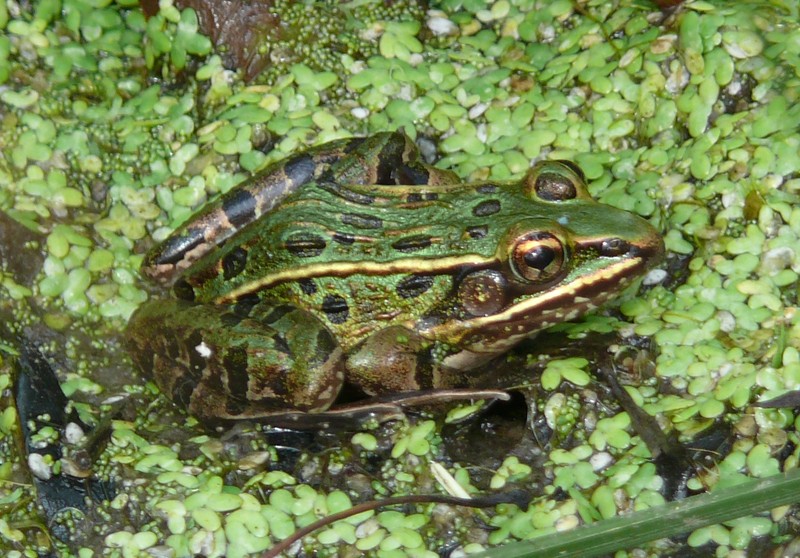 This guide was authored by: Matthew D. Schlesinger

Information for this guide was last updated on: July 29, 2021