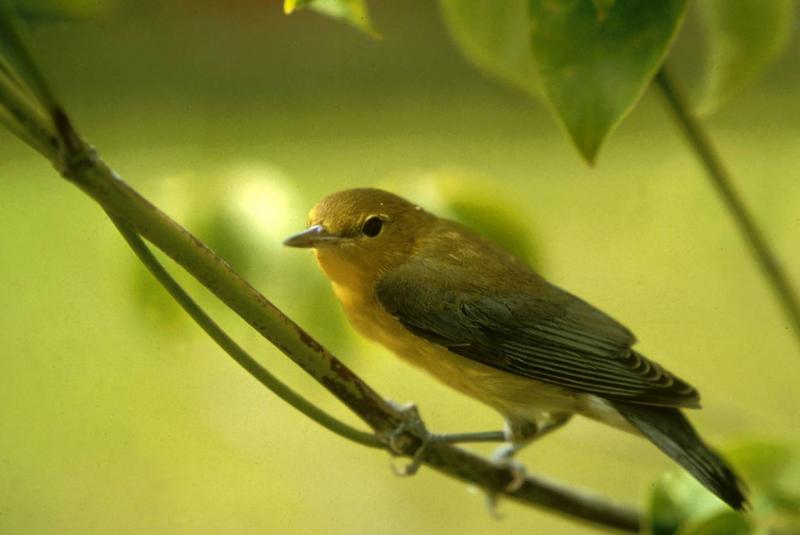 State Conservation Status Rank
S2B
Imperiled in New York - Very vulnerable to disappearing from New York due to rarity or other factors; typically 6 to 20 populations or locations in New York, very few individuals, very restricted range, few remaining acres (or miles of stream), and/or steep declines. (A migratory animal which occurs in New York only during the breeding season.)
Global Conservation Status Rank
G5
Secure globally - Common in the world; widespread and abundant (but may be rare in some parts of its range).

Prothonotary Warblers are one of two cavity nesting warblers. The other is Lucy's warbler.

The first documented time Prothonotary Warblers attempted breeding in New York was in 1910 at a marsh near Cayuga Lake in Tompkins County (Levine 1998). During the 1920s and 1930s, the numbers of spring visitor records increased. In 1931, confirmed breeding was recorded at Oak Orchard Swamp with the discovery of five nests and at least eight singing males. Over the next few decades, breeding was recorded at various other locations in Central and Western New York. Then, during the 1970s, breeding was recorded on Long Island (Levine 1998). Since this species remains at the edge of its breeding range in New York, it is likely that it will be found breeding in one location one year and not found there the next (Andrle and Carroll 1988, McGowan and Corwin 2008). While consistent breeding in an area is relatively rare in New York, the range has expanded in the state over time and seems to be relatively stable over a long period of time. Breeding Bird Survey data are too sparse to determine trends for New York (Sauer et al. 2007).

The primary threat in most areas is loss of suitable habitat (McGowan and Corwin 2008). Loss of old growth forest associated with riparian habitats is detrimental because older trees are more likely to develop nesting cavities. Widespread drainage of required wetland habitat is also a significant threat.

Prothonotary Warblers prefer more mature forests with tree cavities and snags. Trees that are most suitable have a diameter at breast height of 15 centimeters (6 inches). A permanently uncut buffer zone on both sides of streams to maintain or provide thick and shady vegetation along stream banks would be beneficial to this species. Buffer zones are recommended to be at least 90 meters (295 feet) wide (Bushman and Therres 1988 cited in NatureServe 2006). Since Prothonotary Warblers are also know to use nest boxes (NatureServe 2006), it may be beneficial to provide them in areas where natural tree cavities are in short supply.

Additional studies are needed to determine what techniques are best for monitoring Prothonotary Warbler populations. Consistent monitoring of breeding populations could provide important information on population recruitment and dynamics (NatureServe 2006).

In New York, the Prothonotary Warbler breeding habitat is wooded areas near water. Preferred habitat includes flooded bottomland hardwood forests, cypress swamps, and along large lakes and rivers (McGowan and Corwin 2008). Nests are found in cavities of snags or living trees that are typically two to eight feet above the water (NatureServe 2006). They will also raise young in nest boxes (NatureServe 2006).

New York is at the northern edge of the breeding range for Prothonotary Warblers. Localized breeding generally occurs in central and western New York and on Long Island.

The breeding range for Prothonotary Warblers extends from eastern Minnesota and Wisconsin across the southern Great Lakes region to northern New Jersey, south to Texas, the Gulf Coast, and central Florida, west to Oklahoma and Kansas (AOU 1983). Breeding Bird Survey data (1966-1991) indicate relatively high abundances in Louisiana, North Carolina, and Mississippi. The breeding range has expanded northward, especially in the Mississippi Valley and vicinity. Nesting recently (1992) was recorded in Rhode Island (Wadman et al., unpubl., cited in NatureServe 2006). During the non-breeding season, Prothonotary Warblers are found from the Yucatan peninsula (rarely) south on the Caribbean slope of Central America to Nicaragua, both slopes of Costa Rica and Panama, from Colombia east to northern Venezuela, and from the Netherlands Antilles east to Trinidad and Tobago (AOU 1983). They are most common in Panama and western Colombia and northern Venezuela. They are rarely found in Suriname and northern Ecuador. They are known to migrate through and apparently occasionally overwinter in the West Indies. On occasion, Prothonotary Warblers are found in Puerto Rico and they are apparently rare in the Virgin Islands (Raffaele 1983, 1989, cited in NatureServe 2006). There are also records on the Galapagos Islands nearly 1000 km west of mainland South America (Petit and Tarvin 1990, cited in NatureServe 2006).

When compared to other members of the Parulidae family, the Prothonotary Warbler is a reletively large (14 centimeters or 5.5 inches), plump, short-tailed, long-billed warbler. They have large, dark, prominent eyes. Males have a glolden yellow head and underparts that fade to white undertail coverts. Wings are blue-gray and lack wing bars. The tail is blue-gray with large white patches. Females are similar, but are duller and have a less golden head. Prothonotary Warblers nest in cavities. Nests are cup-shaped and hollow consisting of mosses, rootlets, twigs, and leaves. Nests are smoothly lined with fine grasses, leaf stems, and feathers. The inside diameter is 5.1 centimeters (2.0 inches) and the depth is 3.8 centimeters (1.5 inches). The creamy-colored, oval to short oval eggs are boldly and liberally spotted and blotched with brown. The shell is smooth and somewhat glossy (NatureServe 2006). The average egg size is 18.47 x 14.55 millimeters (0.73 x 0.57 inches). The song is described as a series of loud, ringing "zweet" notes on one pitch.

Prothonotary Warblers are found in New York from early April to late September. The best time to observe these birds is mid to late June when the males are in full breeding plumage and are most likely to be holding territories and raising young.

The time of year you would expect to find Prothonotary Warbler active and reproducing in New York.

Walkinshaw, L. H. 1941. The Prothonotary Warbler, a comparison of nesting conditions in Tennessee and Michigan. The Wilson Bulletin 65:152-68.

Information for this guide was last updated on: December 31, 2007