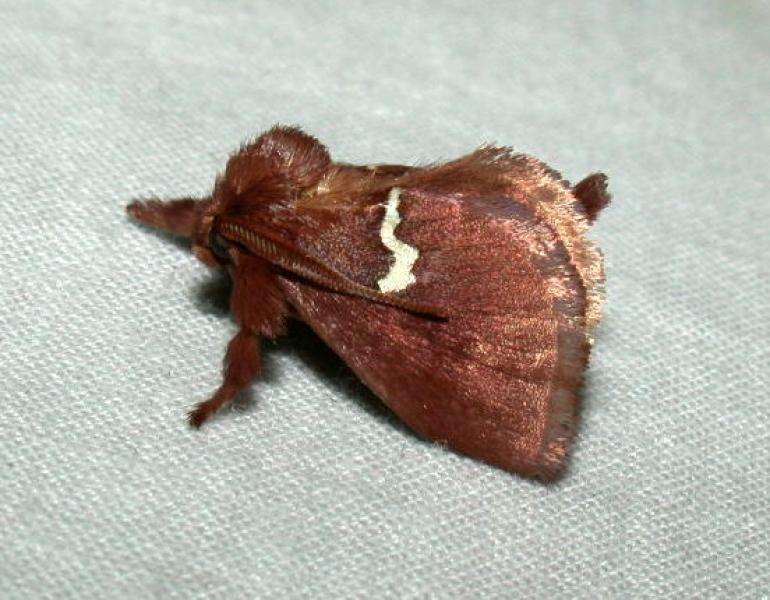 The larvae or caterpillar stage of this moth is actually quite striking. The pink-orange body is marked with black, white, or yellow striping. But beware, the body is covered with stinging hairs.

In New York, this species is known only from one location in the the dwarf pine barrens on Long Island. Additional populations within the pine barrens may eventually be found. This is a more southern, habitat-specific species and therefore is not likely to occur elsewhere in New York, which represents the northern edge of its range.

This species appears to be stable on Long Island. Surveys since 1993 have indicated little change in the dwarf pine barrens population on Long Island with the exception of the 2005 survey, which showed a dramatic increase in numbers of moths found. It is unclear what caused this sudden increase, but forest fires in the dwarf pine plains may have resulted in an increase in habitat for this species.

Known threats include habitat loss due to development and fire suppression, although the threat of development for the remaining habitat on Long Island may be low. The suppression of fires in barrens and other dry places would cause a loss of habitat for the species and therefore a reduction in population size. This species requires open woodland or barrens with pitch pine and scrub oaks. Forest fires are needed, on average, every 5-10 years (Jordan et al. 2003) to maintain this type of habitat. Lack of fires will result in the succession of this community to a closed-canopy forest of tall oaks and other hardwoods (Little 1979, Jordan et al. 2003). Conversely, a fire affecting an entire occurrence could eliminate all life stages that are present.

Additional surveys are needed with blacklight traps to determine the full extent of the dwarf pine barrens occurrence. In addition, the response of this species to management practices such as controlled burns and mechanical removal of vegetation should be evaluated.

In New York State, the Pin-striped Slug Moth is found only in the dwarf pine barrens on Long Island. These open, dry woodlands are dominated by a mixture of dwarf pitch pine and scrub oak, the latter of which is the host species for the caterpillar.

The record from the dwarf pine barrens is the first for New York State and the first north of New Jersey.

This species occurs from New York and New Jersey to Florida, west to Texas, and north to Kansas and Missouri (NatureServe 2010).

This species can be identified from a good image or any specimen. The wingspan ranges from 19-27 mm. The forewing is brown, sometimes reddish brown. The only marking is a narrow, wavy, silvery white to yellowish line above the inner margin (Covell 1984). The larvae (caterpillars) are peach colored with wavy, bright reddish-orange, black, or dark brown vertical striping in three sequences of a four-stripe pattern. The bright reddish-orange stripes are covered with numerous white, stinging hairs.

Adults have been observed in June and into July. The larvae or caterpillar stage typically exists from July to September. In the north, there is only one generation each year. This species is not well studied and therefore the entire life history is not well documented.

The time of year you would expect to find Pin-striped Slug Moth present, reproducing, and larvae present and active in New York.

Information for this guide was last updated on: December 19, 2011