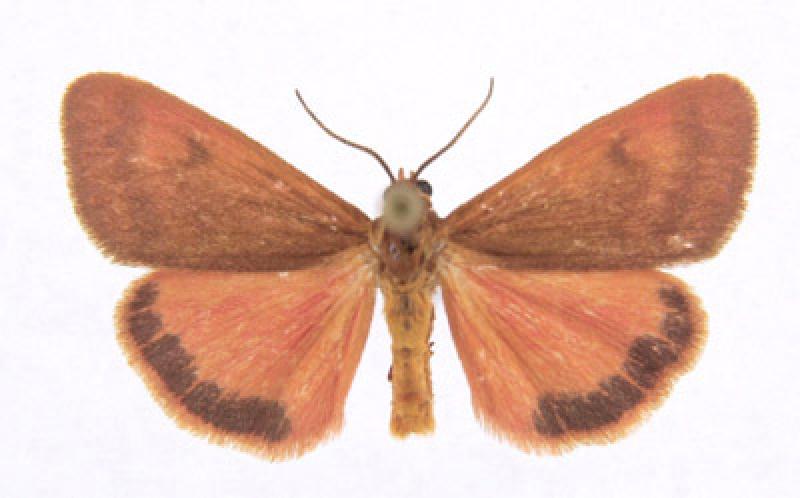 This moth belongs to a group known as the Tiger Moths, so called because of their bold and often contrasting coloration. The adults are often white, yellow, orange, or red with black markings on the forewings. The larvae of this group are known as wooly bear caterpillars.

Because Forbes (1954) did not separate this species from Holomelina ferruginosa, this species' historical range is unclear. New York State has 10 records for this species from five different areas. It is well documented at one site on Long Island. Most of the other sites are based on one or two years of observations. Sites in Albany and Jefferson counties are based on surveys after 2010.

This species appears to be relatively stable on Long Island, especially with a discovery of a new site in recent years. The presence of this species over multiple years at the dwarf pine barrens site on Long Island indicates that the population is viable and reproducing. There was a significant increase in the abundance of this species following the dwarf pine barrens forest fire of 1995. Additional surveys are needed in the Albany Pine Bush Preserve to determine the population status. Moths were found at several locations throughout the perserve; it is assumed the population is viable and reproducing. The short-term trend for the occurrences in northern New York is unknown.

The long-term trend for this species in New York is unknown. It is tied to the long-term trend for the natural community it lives in. The acreage of dwarf pine plains in New York has declined from development, although there is still a large occurrence of this habitat type on Long Island. There is still pine barrens habitat present in the Albany area that is protected.

Known threats include habitat loss due to development and fire suppression, although the threat of development for some known populations may be low. The suppression of fires in the pine barrens would cause a loss of habitat for the species and therefore a reduction in population size. This species requires open woodland or barrens with pitch pine and scrub oaks. Forest fires are needed, on average, every 5-10 years (Jordan et al. 2003) to maintain this type of habitat. Lack of fires will result in the succession of this community to a closed-canopy forest of tall oaks and other hardwoods (Little 1979, Jordan et al. 2003). Conversely, a fire affecting an entire occurrence could eliminate all life stages that are present.

Periodic controlled burns or mechanical management are needed to maintain the natural community for this species. The best management strategy is to manage the natural community, or habitat, where this species occurs. Maintaining pine barrens with their full suite of plant and animal species requires frequent (every five to ten years) disturbance to maintain open-canopy, shrub-dominated communities and to prevent succession to a closed-canopy hardwood forest (Jordan et al. 2003). Researchers have determined that "an active fire management program utilizing prescribed fire with appropriate mechanical treatments" is the preferred method (Jordan et al. 2003). Researchers have also determined that the size, type, intensity, and timing of fires (pyrodiversity) needs to be evaluated for each site to maximize benefits to the natural community and the species it supports (Jordan et al. 2003). The entire occupied habitat for a population should not be burned in a single year. For example, in places where prescribed burning is used, refugia (unburned areas) are needed for many species to ensure that any life stage can survive a fire.

Additional surveys are needed with blacklight traps to determine the extent at known locations, as well as to locate additional occurrences. In addition, research is needed on the response of this species to prescribed (controlled) burning and mechanical treatment to improve habitat.

The Orange Holomelina is found in four counties in New York State from northern New York to Long Island. This species is well documented from the dwarf pine barrens on Long Island and the Albany Pine Bush. These open, dry woodlands are dominated by a mixture of pitch pine and scrub oak. Common shrubs are black huckleberry (Gaylussacia baccata), blueberries (Vaccinium pallidum, V. angustifolium, and V. mytilloides), and sweetfern (Comptonia peregrina). The location in Clinton County is in a dry, open woodland that is classified as a sandstone pavement barrens and is dominated by jack pine (Pinus banksiana). Common shrubs are blueberry (Vaccinium angustifolium), black huckleberry (Gaylussacia baccata), black chokeberry (Aronia melanocarpa), and sheep laurel (Kalmia angustifolia). The site in Jefferson County habitat is described as "northern sandplain grassland area in an open barrens area with pine and oak."

This species has been well documented on Long Island since 1999. A population was documented in the Albany Pine Bush. There are two records from northern New York in Clinton and Jefferson counties. There may be additional populations in southern New York.

Data on the global distribution of the Orange Holomelina is incomplete, but the species is common throughout eastern North America (Covell 1984).

The wingspan of this species ranges from 18-27 mm. Its color varies. The forewing can be pale yellow to olive brown, while the hind wing is usually orange. The forewing has a gray to black reniform spot and wide subterminal line. There is a discal spot and a dark, sometimes faint, outer border on the hind wing (Covell 1984).

Food sources for this species include a variety of herbaceous and woody plants.

The best time to see this species is in mid to late summer when the adults are active.

The time of year you would expect to find Orange Holomelina present and reproducing in New York. 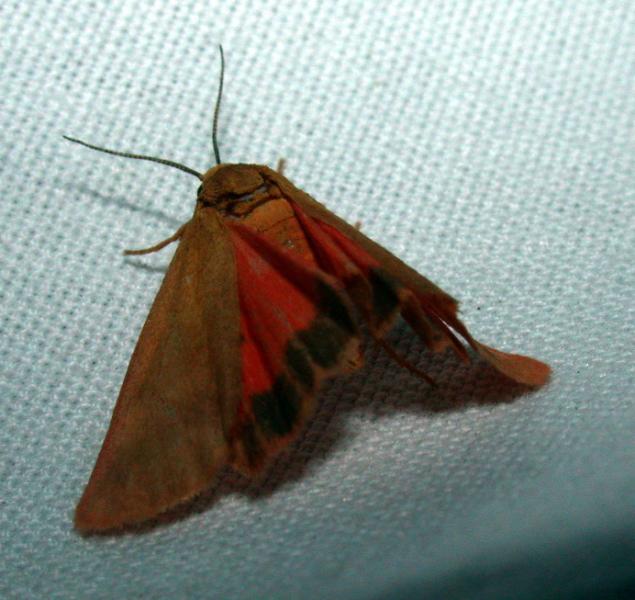 This guide was authored by: Lauren Lyons-Swift and Hollie Shaw