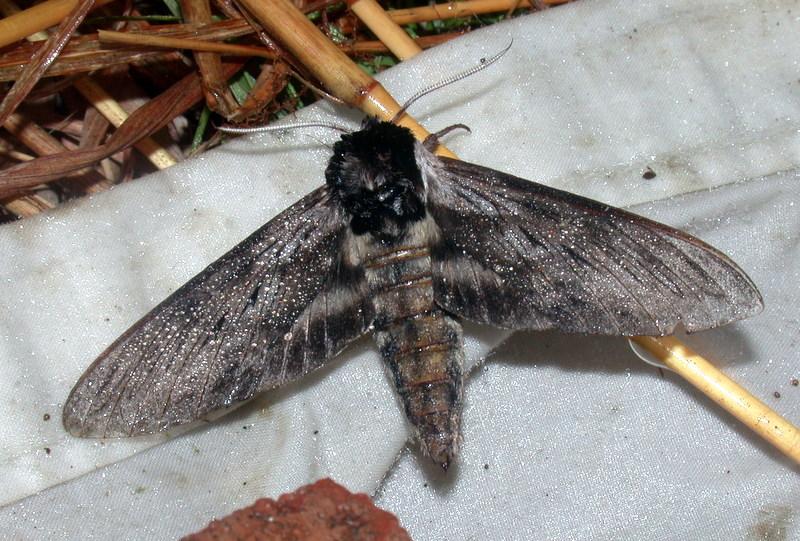 The Gordian Sphinx, also known as the Apple Sphinx, is in a group of moths known as the Hawk Moths. Hawk moths are the world's fastest flying insects. The fastest one was measured at 50 kph (31 mph).

This species appears to be relatively stable over the past decade. The presence of this species over multiple years at the dwarf pine barrens site indicates that the population is viable and reproducing.

The long-term trend for this species in New York is unknown. The numbers of Gordian Sphinx on Long Island have probably declined from historical numbers due to habitat loss from development and the suppression of fires.

Known threats include development and fire suppression, although the threat of development for the remaining habitat on Long Island may be low. The suppression of fires in barrens and other dry places would cause a loss of habitat for the species and therefore a reduction in population size. This species requires open woodlands or barrens, and forest fires are needed, on average, every 5-10 years (Jordan et al. 2003) to maintain this type of habitat. Lack of fires will result in the succession of this community to a closed-canopy forest of tall oaks and other hardwoods (Little 1979, Jordan et al. 2003). Conversely, a fire affecting an entire occurrence could eliminate all life stages that are present.

The best management strategy for this species is the management of the natural community, or habitat, where this species occurs. Maintaining the Long Island pine barrens with their full suite of plant and animal species requires frequent (every few decades) disturbance to maintain open-canopy, shrub-dominated communities and to prevent succession to a closed-canopy, hardwood forest (Jordan et al. 2003). Researchers have determined that "an active fire management program utilizing prescribed fire with appropriate mechanical treatments" is the preferred method (Jordan et al. 2003). Researchers have also determined that the size, type, intensity, and timing of fires (pyrodiversity) needs to be evaluated for each site to maximize benefits to the natural community and the species it supports (Jordan et al. 2003). The entire occupied habitat for a population should not be burned in a single year. For example, in places where prescribed burning is used, refugia (unburned areas) are needed for many species to ensure that any life stage can survive a fire.

Additional surveys are needed with blacklight traps to determine the extent of the dwarf pine barrens occurrence and to locate new occurrences. In addition, research is needed on the response of this species to prescribed (controlled) burning and mechanical treatment to improve habitat.

In New York State, the Gordian Sphinx is known only from the dwarf pine barrens on Long Island. These open, dry woodlands are dominated by a mixture of dwarf pitch pine and scrub oak. Common shrubs are black huckleberry, blueberries, and sweetfern.

This species is probably restricted to Long Island and other scattered habitats farther north. There are recent reports from the Shawangunks and Long Island. Its habitat may be restricted to heathlands, coastal scrub, and a few other uncommon habitat types (Schweitzer 1995).

The Gordian Sphinx is found from southern New England and New York west through central Illinois, to southern Wyoming, and northern Utah and Colorado. Farther south, it is found in a narrow band from North Carolina through Tennessee to Missouri, and in Florida. To the north, it is known from North Dakota and Manitoba (North American Moth Photographers Group at the Mississippi Entomological Museum, account compiled by N. Schneider, no date).

A specimen or a very good image is needed to identify this species. The wingspan ranges from 68-95 mm. The color and markings are highly variable. Typically the thorax is black with grayish-brown edges near the wing bases. The forewing is blackish to gray with white dusting. The hind wing is black and brown with a white fringe (Covell 1984).

Larvae of this species have a variety of host plants including apple, sweetfern, Carolina rose, blueberry, huckleberry, white spruce, larch, and alder. Adults feed on nectar from flowers such as dogbane, honeysuckle, lilac, evening primrose, bouncing bet, and phlox.

The larvae (caterpillars) of this species pupate in burrows in soft soil. There is typically one brood each year. Flight dates of adults range from May to September.

The time of year you would expect to find Gordian Sphinx present and reproducing in New York. 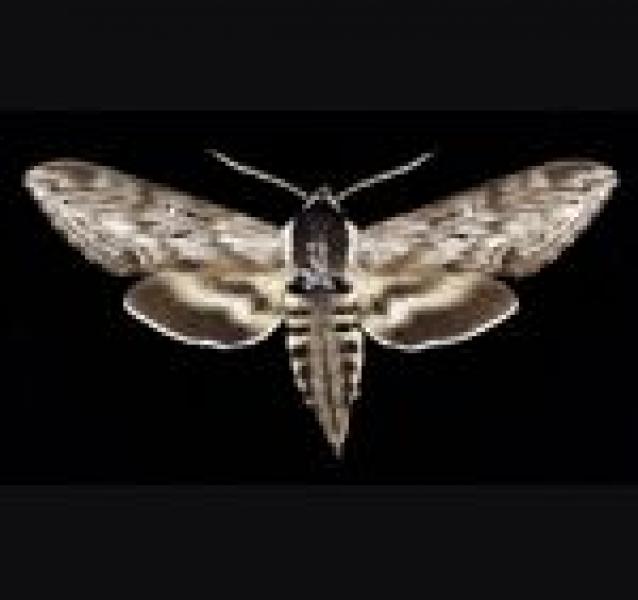 Older records for this species might include specimens now considered to be Sphinx poecillus, which is a northern and more common species.